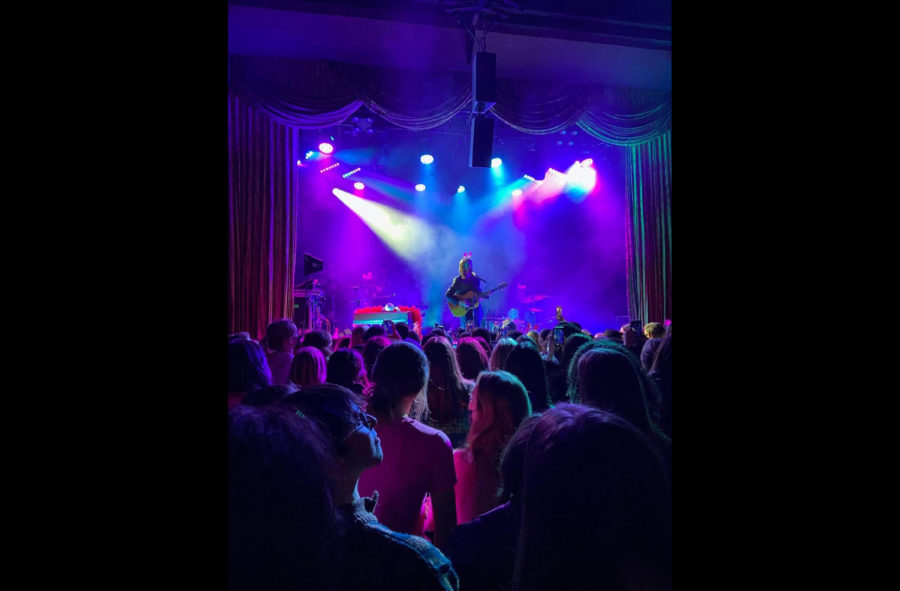 During her concerts Abrams spends a lot of time singing acoustically. In the quieter moments, her fans feel even closer to her and each other. Samantha Zaino ’24 said, “Her music has helped me to push away feelings of isolation.”

Background music booms at the Bowery Ballroom in New York City as fans wait impatiently for Gracie Abrams to perform. Then, the music goes quiet, and all that can be heard is the screams radiating through the venue as she appears on stage.

Gracie Abrams, 22, started her career by posting covers of her favorite songs on Instagram at age 13. As she grew older, she began to post original music on Soundcloud and grew a significant fanbase. By 2019, she had released her first single “Mean It” and had signed with Interscope Records.

In April of 2020 she released her song “I miss you, I’m sorry,” which she wrote with her boyfriend and producer, Blake Slatkin, as well as Sarah Aarons, who has worked with Alessia Cara and Dua Lipa in the past. “I miss you, I’m sorry” remains her most streamed song. It’s beautifully heartbreaking with lyrics that shatter her fans with every listen. Abrams sings, “You said, “Forever, ” and I almost bought it / I miss fighting in your old apartment / Breaking dishes when you’re disappointed / I still love you, I promise”

Abrams’ fans love the exquisite lyricism present throughout all of her songs. Le Wang ’25, a passionate Abrams fan said, “Gracie fans listen to her for the lyrics just as much as the songs themselves.” Abrams is also clearly passionate about songwriting and poetry overall. She told Variety, “Every time that I write, whether it’s journaling or songwriting, I feel better after. There’s a wave of relief and gratitude.”

After “I miss you, I’m sorry,” Abrams released her first EP, Minor, in July of 2020. At this point, Abrams had a large cult following and was able to headline her ‘I’ve missed you, I’m sorry tour,’ where she performed at thirteen venues across America. On this tour, she played all of her released music and several of her unreleased songs that ended up on her second EP This Is What It Feels Like.

Abrams’ first EP and earlier singles were mostly centered around her experiences with heartbreak and dating. In “21,” a song from her first EP, Minor, she writes, “I get a little bit alone sometimes and I miss you again.” In her heart-wrenching song “Long Sleeves,” she writes “’Cause I can’t love you even if I want to / Got a lot to work through / You don’t know where I’ve been.”

Abrams expanded upon ideas from her first EP in her second one, while still showcasing more of what she has to offer to the music world. Describing This Is What It Feels Like, William Wang ’22 said, “This Is What It Feels Like introduced us [Abrams fans] to a journey of insecurity, confusion, and raw emotions that showcases her vulnerability and relationships.”

By her second EP, Abrams’ music shifted from being mostly about her experiences with others and more to her feelings about herself and her own mental health. In “Camden,” a track from her second EP, Abrams writes, “How do you call it when you’re in your head? / Like when you really keep inside of it?” In her most recent single, “Block Me Out,” she writes “It’s honestly kind of funny / How every voice in my head is trying its best to haunt me.”

Abrams’ discussion of mental health connects her to her teenage fanbase. Fans of Abrams feel like she truly understands them, which is largely because of the vulnerability in her music. Ayana Chari ’24, an avid Gracie fan, said, “I can turn to Gracie when I need to cope with feelings I’m unable to vocalize.”

This Is What It Feels Like has a mix of sounds that her fans adore. Her songs about mental health are coupled with a more whimsical, acoustic, soft production that is similar to Taylor Swift’s Folklore. A large reason for this sound is her main producer, Aaron Dessner. Aaron Dessner co-wrote and produced four of Abrams’ songs about mental health on her second EP, as well as “Block Me Out.” Abrams told Interview Magazine that, “Working with him is one of the luckiest encounters in my life.” Dessner is best known for being part of the indie band The National, and for producing and co-writing much of Taylor Swift’s Grammy winning album Folklore, as well as her 9th studio album, Evermore.

Although This Is What It Feels Like includes many new sounds for Abrams, she still incorporated her usual pop production in some of the songs. On the EP, her louder pop sound is mostly coupled with her songs about relationships, as it also was in her earlier music.

Additionally, she worked with producer Joel Little on this EP, who she also worked with on the Minor song “21.” Joel Little produced and co-wrote “Better,” “Wishful Thinking,” and the fan favorite song “For Real This Time.” He is known for his work on electronic pop songs as he produced Lorde’s Green Light and Supercut.

This Is What It Feels Like is an amalgamation of different production styles and instruments, and her fans cherish it. Isabella Randall ’25, said “I applaud the way that Gracie Abrams is able to make all of her songs sound different while still leaving her specific artistic mark on every song.”

Abrams was born on September 7th, 1999 to J.J Abrams, the director of several Star Wars movies, and Katie McGrath. She has two brothers and grew up in Los Angeles, California. She attended Barnard College in New York City for a few semesters but she is now on a leave of absence to focus on her music.

Abrams also has a close friendship with pop star Olivia Rodrigo. In April 2022, Abrams opened for Rodrigo on a leg of the sold-out Sour Tour. Rodrigo and Abrams inspire each other musically. Rodrigo frequently speaks about how she has always loved Abrams’ music. In an interview with Abrams, Rodrigo said, “If you look through my bookmarked posts on Instagram when I was 15 or 16, it was all your songs.”

Moreover, Rodrigo cites Abrams’ Minor EP as one of the main musical inspirations for her Grammy award-winning hit single “Drivers License.” About Olivia Rodrigo, Abrams told Variety that, “She’s an incredible friend. There’s a specific sensitivity that writers share, and she’s a really empathetic person.” Abrams is also friends with and an avid fan of Phoebe Bridgers.

Gracie Abrams is extremely close to her fans and frequently talks to and checks in on them during her concerts. Abrams dedicates time to interacting with her fans on social media and thanking them for their fan projects. As of late, many fans have been making cakes about various milestones that Abrams has reached, such as the one-year anniversary of the release of her song “Mess it Up.”

Abrams fans, especially earlier and more serious fans, feel so connected to her they often buy what they call “Gracie Converse,” blue Converse sneakers that match the ones that Abrams owns and frequently wears. They do this so they can have a piece of her in the way they dress.

Many fans also find Abrams’ music through their friends and then share it with the people they love. Chari ’24 said, “Her music is what helped me forge friendships as we bonded over the comfort she brings us.”
Ayana Chari ’24, an avid Gracie fan, said, “I can turn to Gracie when I need to cope with feelings I’m unable to vocalize.”