The Logic Behind Science: A Profile on Mr. Morrell, Assistant Principal of Physical Science & Engineering

For Mr. Morrell, doing and getting it correct is not enough; understanding is more important. 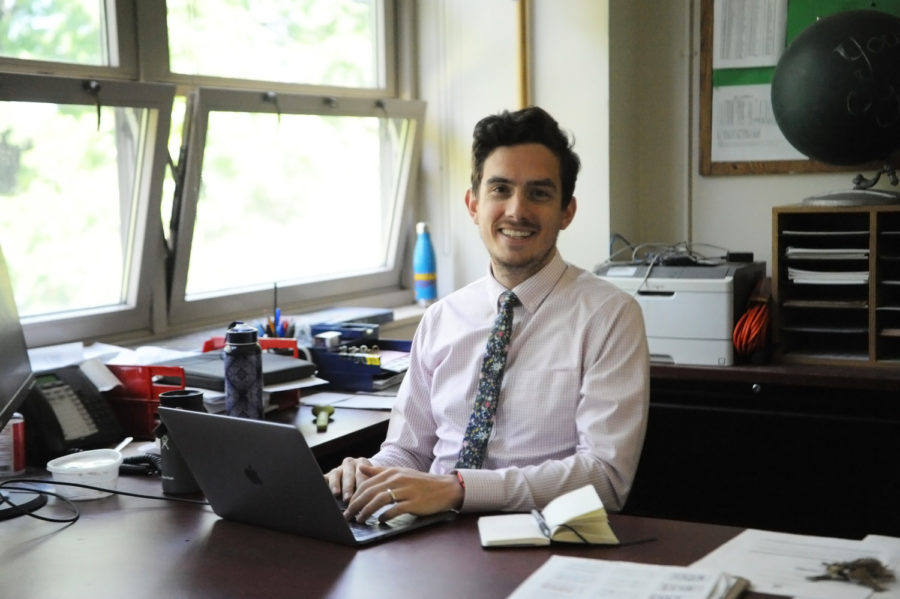 When asked about his hobbies, Mr. Morrell replied, “I don’t have a lot of hobbies but I spend a lot of time doing work for school which is fine, because it’s something that I enjoy doing.”

While doing a hard problem, you come across a bump in your process of conceptualizing, whether it is from not understanding the ideas enough or just being confused about the wording of the problem. However, in the end, you get the problem right after understanding the reasons behind it. Mr. Morrell, the Assistant Principal of the Physical Science Department, is very familiar with the principle of understanding and tries to implement it in many aspects of education.

“I really liked electricity, building circuits, and the theory behind it,” Morrell said. The understanding of the concept behind how mechanisms work is one of the main messages he expresses throughout his teaching. His classes are focused on trying to figure out why a light bulb may light up when connected to a complex circuit, but does not light up when connected to simple ones, or why the little mistakes someone makes in 3-D printing can cause the object to not function properly.

“He is a really kind person and he helps me learn a lot as well. He is also a funny guy and he really cares about his students,” said Lucas Geerken ’25. Geerken echoes many other students’ feelings: they believe that Mr. Morrell is a kind, helpful, and approachable teacher.

And though some may think that the memories of these general acts of kindness dissipate quickly, many students still remember how he helped them years after that act took place. “Shortly after the pandemic hit, I felt unmotivated to complete certain assignments. Mr. Morrell understood my situation, so he allowed me to complete the assignments with full credit. This little act of kindness stuck with me for a while,” said Susan Cohen ’23. For a ninth grader thrust into the midst of a global pandemic, Morell’s understanding of the situation was crucial to helping them adjust to the new circumstances.

This is an experience I had firsthand when I first met Mr. Morrell. I had just ended my rotations unit and I was still struggling with how to complete some simple problems. In fact, I was struggling with the most basic concepts. After I nonchalantly mentioned my concerns, he was eager to help and took me through a problem, asking me to solve each step and having faith that I could do it. Though it took a whole period to solve one problem with errors being made every time I progressed, he was patient and nudged me in the right direction. That little nudge is what most students describe as his personal touch. “He answers your questions in a way that you have to find the answer, and it helps you learn a lot,” said Geerken.

By guiding students through the concepts but not giving them the answers, Mr. Morrell allows his students to figure out their own reasons why, and come up with explanations that they’ll understand, even if it’s not the textbook answer.

“I really enjoy introducing students to what the outcome of building the circuit is and having them come up with an explanation as to why that works,” Mr. Morrell said.

At this point in our high school experience, most of us underclassmen still have no concrete plan of what we want to do. We might want to be a scientist one day but a lawyer the next. And as you grow up you develop your own passions and your own ideas on what you want to do.

Mr. Morrell was also unsure of what he wanted to do, still being a little surprised that he is the Assistant Principal of Physical Science and Engineering at Bronx Science. However, one thing never wavered: his dedication to physics. “After I took more advanced physics classes, I realized that I wanted to dedicate my studies towards physics, and so I dropped my education major,” he said. And so he did, first getting his bachelor’s degree in physics. Eventually he decided to return to a path that would lead to him becoming a teacher, and so he pursued a master’s degree in physics education.

But that passion for physics didn’t disappear out once he got to Bronx Science, but rather it deepened. In his classes, he shares concepts of physics to students to further foster a community of students who love physics. “He explains certain physics concepts to me, and answers my questions regarding them and other topics,” said Vimala Albert ’25. And through being both a Assistant Principal for the Physics department and a mentor for both robotics teams, Mr. Morrell has continually shown his passion for a subject that most consider challenging.

It’s a phrase you hear often: “The greater the hardship, the greater the reward.” The logic behind it is that the more you work and the more effort you put in, the more you’ll feel fulfilled. To Mr. Morrell, that belief was a factor in what allowed him to be a physics student, an engineer, but most importantly a teacher. “The challenge of it made it difficult to pursue but I found that being challenged made it rewarding when I’d develop even a modicum of understanding,” he said. He employs his own belief that one shouldn’t stop at something because it is difficult, but rather “remove the mental block which is a criticism of yourself.”

As someone who struggles daily, he doesn’t let the mental blockades stop him from doing something but rather, they push him to do more. “I would spend a long time trying to understand, practicing, practicing without knowing what the heck I was doing.” But after not giving up and powering through any challenges he came across, he finally had that eureka moment. The sense of fulfillment and reward of knowledge that comes from finally understanding a concept can only be described as one of the best feelings someone can feel after racking their brain for hours trying to figure out what’s going on.

If he had not chosen to become a physics teacher, Mr. Morrell would have likely pursued a degree where physics can be applied, once again showing his passion for physics. “I think if I wasn’t a teacher, I would have gone into programming or some sort of engineering position,” he said.

Rewards out of Hardships

Understandably, one may feel frustrated after hearing a lesson for three weeks and still not being able to get the basic gist of the concepts behind it. That would make them feel like they want to give up because they don’t feel like they belong in a room where the other students in class understand it immediately. It makes you start to believe that “They are the person who does physics and I’m not,” Mr. Morrell said. However, he doesn’t want any student to give up.

Believing in your own abilities is what he tries to foster and develop in all of his students. Mr. Morrell wants to break the mold that if you are not good at something the first time it automatically means that you can’t do it. Rather he believes that the end results between a person who gets it immediately and those who don’t, won’t always be different.