The Story of Hannah Lee ’23: From First Year Rookie to Head of Programming With the Sciborgs

The journey from taking her first computer science class at Cardozo to becoming Head of the Programming Department on Bronx Science's robotics team, the Sciborgs. 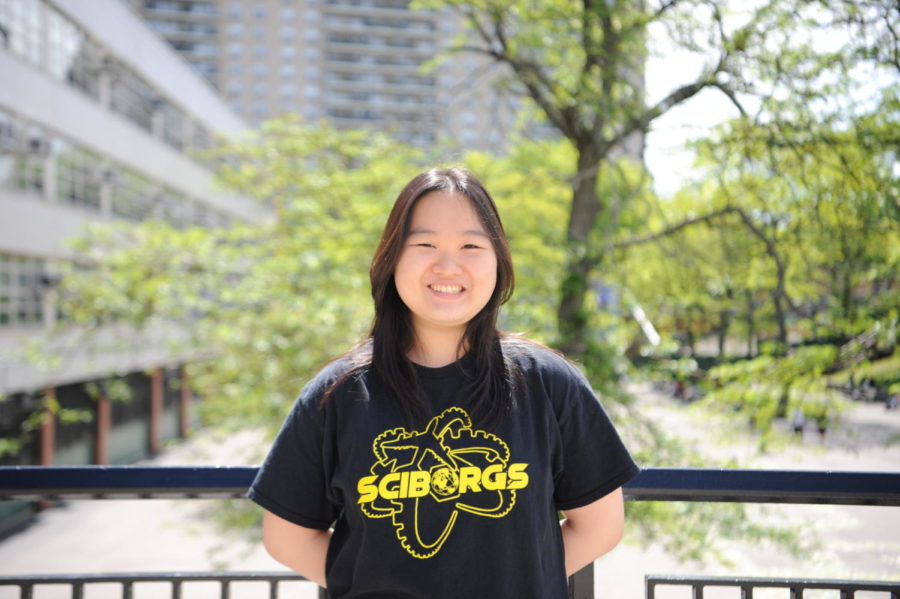 Hannah Lee ‘23 did not have the typical start to her high school journey. Her journey started at Benjamin N. Cardozo High School in Bayside, Queens. Initially Lee was very upset at herself, as going to Cardozo was not her plan; however, she made the most out of it. At Cardozo, she was introduced to the world of computer science, and with time Lee developed a strong passion for it. Balancing her new interest with school work and SHSAT studying, Lee worked hard and was later accepted into Bronx Science during her sophomore year.

Getting accepted into Bronx Science was a dream come true for Lee. She could not believe that she had gotten in and could not wait to dive into the endless opportunities offered at our school. However, the 2020-2021 was fully remote for the vast majority of students, including Lee, due to the COVID-19 pandemic. “I wish that school was in person last year. It would have given me time to adjust and to make new friends as a new sophomore. But I am happy with the outcome, because I actually knew a few people in robotics beforehand,” said Lee. Adjusting to a new school can be very stressful but it was not much of a challenge for Lee. “Already coming into this school, I knew a couple of people. Now, I see more familiar faces throughout the day.”

During her first year at Cardozo, Lee built a strong interest and love for computer science to which she credits the classes she took during her ninth grade year. “Since I got in through the zoned program at Cardozo High School, I was placed into computer science. It was my only option. That’s where I learned the basics of Python.” At first, she didn’t know what to expect. But when she left Cardozo, she knew that she wanted to pursue one of the many realms of computer science.

With her junior year being Lee’s first in person school year at Bronx Science, she could not wait to try out for Sciborgs, one of our two robotics teams. Her love and interest in computer programming stayed with her since her ninth grade year and was stronger than ever. Lee knew what to expect. “I definitely understood that there was a possibility for making the team, because there was only one junior in the programming department. However, I doubted my programming skills because they seemed to be lacking compared to the other juniors and other students who tried out. I honestly did not expect to make the cut.” Regardless of this mindset, Lee applied and made it onto the Sciborgs Robotics Team. When Lee joined, she could not wait for build season. Lee recalls the build season as one of the most fun and memorable times she has had at Bronx Science. Although it was very time consuming, staying after school for long periods of time and coming to school during the weekends, it was definitely worth it.

It was not too long ago that Lee found out she would be the head of the Sciborgs Programming department for the 2022-2023 season. While she heard about the position, she never considered that she would get it. “I didn’t think I was qualified enough. There are a lot of members on our programming department who are way more qualified in terms of programming skills.” When she found out she became head, Lee at first could not believe it. “When I found out, I was super happy. I would describe how I felt similar to how I felt when I found out I got into Bronx Science. I’m super thankful and will always be grateful to the current heads for giving me this opportunity!” Lee hopes that with her hard work and knowledge she gained from her peers this year, she will be able to create an even more successful robotics season next year.

When Lee thinks about her new leadership position, her mind jumps to the improvements she wants to make this year. “I want to make Sciborgs an actual Co-Ed team.” Going into the next season, Lee will be one out of the two girls on Sciborgs (the other Bronx Science robotics team, the FeMaidens, is an all girls team). Lee plans to increase the number of girls on the Sciborgs team by promoting it more and showing others that Sciborgs is a welcoming environment for girls. Along with getting more girls to join, Lee has other plans to improve the team as a whole. “Team communication, team organization, and time management are critical factors for success next year,” she said. Lee came to this conclusion after her first build season and robotics competition. Clearly, for Lee, the Sciborgs are all about teamwork. She hopes that next year, during the competition, the team as a whole will be more prepared for what is to come.