A Respect for Literature in All Its Forms: A Profile of English Teacher Mr. Grossman

As a songwriter, poet, and literature enthusiast himself, Mr. Grossman has a lot of personal experience that he uses to enrich his lessons. His approach to teaching is unique and vastly rewarding. 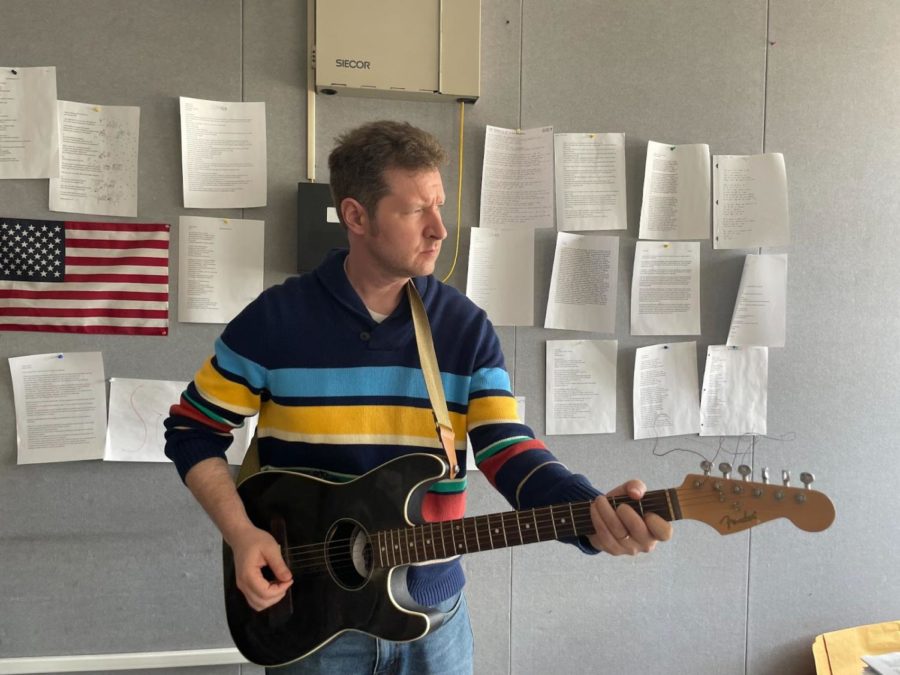 An audience of thirty, packed into a stuffy venue, watches an artist at work. On the stage, a man wields a guitar and professes mystical soliloquies in verse. The spotlight is blinding and the crowd’s glares are not encouraging. Despite this, the performer maintains his composure and takes a quiet breath. With gentle force, he plucks the strings of his guitar and allows the vibrations of his voice to fill the room, but only just so. He looks to the sky and sings his final line, “It takes uncertain leaves to make uncertain tea.” The performance ends with one last strum of his guitar. He lets the chord fade into oblivion. Then, there is a brief period of deafening silence before an explosion of applause. A piercing bell cuts it all short. It’s time for fourth period. Mr. Grossman wishes his students a nice rest of their day and smiles after another successful performance.

Sam Grossman, my former 12th grade AP English Literature: Creative Writing teacher at Bronx Science, is more than happy to make the classroom his stage. A songwriter, singer, and poet, Mr. Grossman is not only a teacher of writing, but a practitioner and student of the art form itself. His unique approach to teaching English expands beyond the course curriculum. He shows us students how to apply our learnings to the world around us, and how to find joy in doing so.

Long before he ever planned to be a teacher, Mr. Grossman fell in love with music. As a child, his father sang him to sleep every night, choosing songs from a wide array of artists. But it was, as Mr. Grossman said, The Beatles specifically who really made him “take it all more seriously.”

When he began to play the guitar, Mr. Grossman learned through the lens of The Beatles’ music. Most striking to him was the balance between simplicity and expertise that the band displayed. Although their music is not “overly complicated,” said Mr. Grossman, you can use “a certain level of music theory” to understand why their songs sound so good.

At Fieldston High School in the Bronx, where Mr. Grossman attended, he joined his first band. Although he juggled many different extracurriculars during his teenage years, being a part of his band ‘Shamus McNasty’ ultimately called to him most. After Mr. Grossman graduated from high school, he decided to major in English at Yale University, largely because he “wanted to be able to write great songs.” At Yale, Mr. Grossman was able to play in numerous other bands, exploring genres such as britpop and country, and even teaming up with award winning violinist Itzhak Perlman’s son, Rami. At the end of his four years in New Haven, Mr. Grossman returned home to New York City, ready to be a part of more music.

Soon after, Mr. Grossman joined the band ‘The Wowz.’ The band, a trio (and later quartet) of musicians, was Mr. Grossman’s biggest musical success. The band released three albums over seven years, performing a brand of woozy folk music with undoubtable Beatles’ influence. In 2010, their song “Happy Today” was featured in the 2010 motion picture “It’s Kind of a Funny Story.”

Alongside his music career, Mr. Grossman had also begun a career in teaching. After college, Mr. Grossman became a substitute teacher for different schools around the city. After a couple years, however, he needed to go to graduate school in order to maintain his substitute teaching license. He attended graduate school at The City College of New York, and after four years found himself on the job market, looking to become a full-time teacher.

During the summer of 2013, Mr. Grossman joined Bronx Science’s English department. Although he found his work “very difficult” at first, Mr. Grossman also found working at Bronx Science to be “instantly rewarding.” Eight years in, Mr. Grossman said that “I get a little bit better each year, but I find it increasingly fulfilling as I continue to do it.”

During the current 2021-22 school year, Mr. Grossman has taught both first year English and senior-level AP Creative Writing. Given his musical background, studies in English, and eagerness to spread his own passions to others, being an English teacher is something that Mr. Grossman can truly say that he loves. Although he says his life would not be complete without the music recording and shows he does outside of school, Mr. Grossman finds the act of teaching to be “entirely fulfilling.”

Mr. Grossman’s eagerness about his job is evident to the students on the opposing end of his teachings. Rather than just preparing his classes for final tests or AP Exams, Mr. Grossman personalizes his lessons in every way he can. As Mr. Grossman’s student, Avery Pratt ’22 said, “Just how much excitement he applies to all of his lessons is very tangible, because you don’t feel like he’s teaching you a book, you feel like he’s giving you a personal recommendation.”

For Mr. Grossman, this is a very important focus of his lessons. As an avid writer himself, he looks to provide the “spark” that he felt when he was our age reading David Berman poems and listening to Bob Dylan songs. These recommendations demonstrate that “great” literature is not only restricted to the classics that someone decided were great at one point in time, but encapsulates all those songs and poems and books which strongly impact us personally.

When Mr. Grossman shares his own music, he reveals himself to be a student of English himself, helping us students relate to him, while learning directly from his application of the literary concepts in our course curriculum. Anna Ostlund ’22 said that it is “very refreshing to see a teacher who’s very passionate about something and will try to incorporate that into lessons,” and that “it’s a sweet and thoughtful thing for him to do that through music.”

Admittedly, for Mr. Grossman, it’s not always easy to perform vulnerable songs in front of so many jaded teenage eyes. Mr. Grossman says that he feels “a little bit terrified” when he performs, but that he is always “proud” to be sharing his creative process with his students who are blossoming writers themselves.

Because Mr. Grossman shares a part of himself with the class in the form of songs that are deeply personal to him, he leaves students feeling a personal connection with him. As a result, students often feel compelled to share their own personal anecdotes during class discussions, as well as confide in Mr. Grossman outside of the classroom. For Avery Pratt ’22, Mr. Grossman even became the “primary consultant” for his personal statement in applying to college. Avery says that Mr. Grossman helped him paint a clear, concise picture in his essay, that the tools Mr. Grossman provided were “groundbreaking,” and that they really helped him get into the college he wanted to go to.

Walking into Mr. Grossman’s class each day, it was hard for me to know exactly what I would be walking into. I might be privy to one of Mr. Grossman’s impromptu performances. Our class might be listening to rap music and analyzing the poetry inside its lyrics. Mr. Grossman might put himself into the rows with the students and lead open discussions as he learned from art alongside us. One thing that’s guaranteed each day is that Mr. Grossman cares about what he is teaching. Mr. Grossman’s approach to teaching is unique but vastly rewarding. Avery Pratt aptly describes our class as being subject to a “jazz-based approach to teaching.” Mr. Grossman’s lessons involve “a lot of improvisation,” but they are “never hasty or shoddily constructed.”

Being in Mr. Grossman’s class this past 2021-2022 academic year has truly influenced me as a person. Whenever my English classes delved into creative writing in the past, I felt lost. I never felt that I really “understood” forms of writing such as poetry, and I took AP Creative Writing in order to leave my comfort zone. Mr. Grossman helped me to realize that I had the “necessary” creativity inside me all along. He helped me realize that the music I love is a form of creative writing itself, and that it is okay for me to follow whatever gives me motivation, no matter how atypical those subjects might be.

I have left Mr. Grossman’s class as a stronger writer and poet. I understand better how to write personal statements, largely due to my one on one meetings with Mr. Grossman regarding my college essays. As a musician myself, I’ve even grown as a performer, learning from Mr. Grossman to take myself less seriously on stage and to embrace fear as an aspect of exciting performances.

When I was interviewing Mr. Grossman for this article, I asked him what advice he had for Bronx Science students. He thought for a few seconds and then smiled and told me he wanted to share a string of lyrics from the song “Advice To The Graduate” by his “hero” David Berman. The lyrics he shared go as follows:

Well, don’t believe in people who say it’s all been done

They have time to talk because their race is run

So get in some licks

And hold your head up

And soon you’ll be drinkin‘ from that crystal cup.

As I have now graduated from Bronx Science, to further the pursuit of my own crystal cup starting in college this fall, I’m immensely grateful for the teachers like Mr. Grossman who have helped me along the way.

“Just how much excitement he applies to all of his lessons is very tangible, because you don’t feel like he’s teaching you a book, you feel like he’s giving you a personal recommendation,” said Avery Pratt ’22.