Before our Valedictorian and Salutatorian graduate from Bronx Science and continue on with their journeys in higher education, they have advice, memories, and gratitude to share with the Bronx Science community. 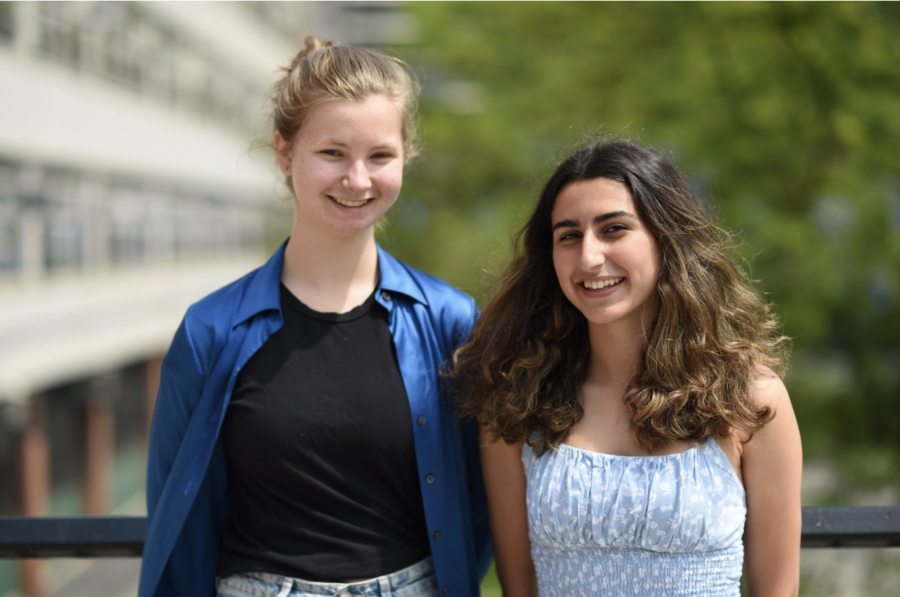 Pictured here are the Valedictorian Jennifer Khosid ’22 (left) and Salutatorian Aliya Fisher ’22 (right) of the graduating Class of 2022.

As our first school year that has been fully in person comes to a close, due to the ongoing COVID-19 pandemic, the Class of 2022 is excitedly preparing for their graduation from Bronx Science. Among them are Jennifer Khosid ’22 and Aliya Fisher ’22, Valedictorian and Salutatorian, respectively, for the Class of 2022. Khosid and Fisher earned this high honor due to their outstanding academic records, reflecting their true dedication to Bronx Science. They plan to deliver speeches during Bronx Science’s 94th Commencement Ceremony on Thursday, June 23rd, 2022, at Arthur Asche Stadium.

Khosid, Valedictorian, has a GPA of 99.166 and Fisher, Salutatorian, has a GPA of 99.092. During their time at Bronx Science, both Khosid and Fisher were dedicated to their studies, and even more so dedicated to many activities within the Bronx Science community. Both Khosid and Fisher are involved in debate, Khosid in Lincoln Douglas and Fisher in Policy. Fisher discussed how important her role as captain of the Policy debate team was over this past year, as she strengthened the team after coming back to in-person debate after last year in which it was fully remote on Zoom.

Fisher is attending Stanford University in September 2022 and is planning to major in biology while continuing to explore her interests in the humanities, specifically the field of politics. Fisher is ecstatic about being exposed to groundbreaking ideas, and “learning in a way where I feel like I am making a difference and changing the way that we view things.”

Khosid is also a part of the school’s Mock Trial team, is a dedicated member of the National Honor Society, and is part of the math research program, studying computational neuroscience. Fisher serves as the Editor-in-Chief of the Bronx Science Journal of Biology, a biology publication which she is in the process of editing and publishing for this school year and last school year. She is also the captain of the Girls’ Varsity Softball team.

After graduation, Khosid plans to attend the University of Chicago starting this September 2022, to study economics and to minor in data science. She is fascinated by economics, as she uses it to view the world through a new and innovative lens. This passion has catapulted her towards the trajectory of a future career involving data science and econometrics, most likely in a corporate field, which she plans to pursue after completing graduate school.

Education is a value that everyone involved with the Bronx Science community holds very dearly (students, faculty, parents, and alumni), and Khosid and Fisher are exemplars of this value, as they both explain their own thoughts regarding the educational process. “Education is about being given the tools to make the world a better place and improve it through science, and developing new technologies and learning about the world in a way that makes it so that you can go out and change it,” said Fisher. She follows this interpretation in her own way, completely embracing all of her studies and truly looking forward to continuing to do so at Stanford University this fall. Khosid speaks about the privilege of education, emphasizing that “education is really synonymous with opportunity….we see a lot of disparities in the allocation of education.” Khosid is extremely grateful to be at an institution such as Bronx Science that provides such a high level of educational excellence, and she believes that everyone should be fortunate enough to receive the same level of learning across America and the world.

Both Khosid and Fisher explained that in their time at Bronx Science a large contribution towards their academic success came from influential teachers and the subjects that they teach. Khosid is deeply interested in the material found in her AP Economics course, and immediately brought this up when asked about noteworthy classes, saying, “Micro and macro economics are a really interesting way to think about the world. That, in general, is a good way to think about classes — it’s something that changes your worldview or how you conceptualize something.” Khosid also worked with Mr. Symons, Social Studies teacher and Mock Trial Faculty Advisor, through her involvement in Mock Trial, and found that Symons fit her definition of an influential teacher. “Influential teachers have just been….somebody who pushed you towards academic excellence, expected a lot from you, and then really counted on you to show up and do it.”

Fisher also spoke on her experience with inspirational teachers at Bronx Science. She felt extremely drawn to the lessons in her cell biology class with Dr. Tracy LaGrassa, Biology teacher, who Fisher describes as influential in the presentation of her lessons and her individual teaching style. Fisher emphasizes that Cell Biology was one of her favorite courses that she took during her four year career at Bronx Science. “It was very different from a traditional class,” said Fisher. “It was very free form, so we read a lot of scholarly articles and explored our own topics of interest through research and independent reading.” Fisher appreciated the ways in which this course exposed her to applying creativity and new forms of exploration in the scientific environment of the cell biology classroom.

As their careers end at Bronx Science and their college careers begin, Fisher and Khosid have useful advice to offer to current Bronx Science students during their remaining years at Bronx Science as well as advice for their fellow graduating seniors for success in college and the world beyond. Both Fisher and Khosid highlight the importance of a school-life balance (or work-life balance) and taking advantage of the unique community that Bronx Science has to offer. Fisher explains, “Don’t be close minded about the things you could see yourself doing, and don’t put yourself in a box before you try new things.” She adds that while she could have never imagined herself pursuing debate, it is now one of her favorite and most meaningful activities that she partook in during her time at Bronx Science, and she urges all students to pursue new opportunities. Khosid wants students to know that by pursuing extracurricular activities, forging friendships, and making time to prioritize yourself while keeping up with school work, you can absolutely maintain a school-life balance. For Khosid, pursuing this balance was one of the best and most meaningful positive experiences that allowed Khosid to enjoy her time at Bronx Science.