Health and Happiness First: A Profile of Health Teacher and Dean, Christopher Dahlem

An in-depth profile of a teacher who puts health and happiness first. 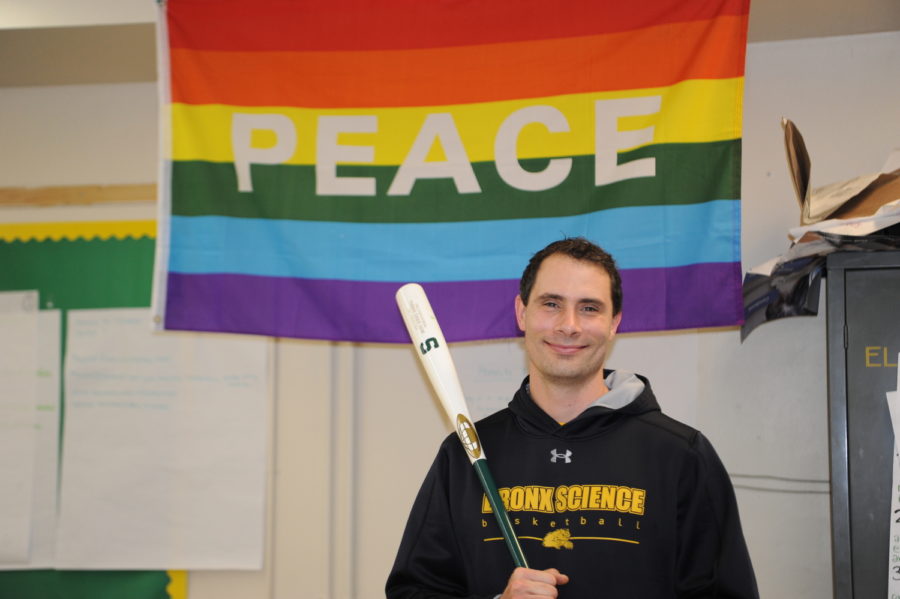 In his Health class, Mr. Dahlem poses with a baseball bat in front of a Peace sign, a representative image of his personality and teaching style.

There is power in patience.

That is the lesson that Bronx Science Dean and Health teacher, Christopher Dahlem, learned throughout his six years teaching at the P811M Mickey Mantle School of Specialized Education (District 75), before he began working at Bronx Science.

“Patience has gotten me farther with a lot of students than I would have gotten without it,” Dahlem said. Dahlem was the Physical Education teacher at Mickey Mantle, and he spearheaded the creation of its athletic program. Prior to his employment, Mickey Mantle had no athletic program whatsoever, making Dahlem’s action the first of its kind, and with long-lasting benefits.

Christopher Dahlem, now teaching at Bronx Science, is thought of by many students as one of the most renowned adults in the school. His classroom humor and unabashed honesty are features that show students it is okay to feel and to make mistakes.

When I first began attending Bronx Science, Mr. Dahlem was my ninth grade Physical Education teacher. His strong command of the class and humorous style of teaching was refreshing and new, although the ninth grade class was a tough crowd for comedy. Mr. Dahlem’s demeanor has always been unusually honest. He aims to relate to people by talking about his own experiences, putting students – especially ninth graders – at ease.

“You try to make a relationship between your experience, and those of the ones whom you are teaching,” he explained.

Dahlem values those relationships just as much as his students do, and acknowledges that they have let him reflect on his own memories of adolescence.

“It’s been helpful because I can relate with a lot of emotions and feelings from when I was sixteen or seventeen years old — and I had a lot that I didn’t even address at the time,” he said. Dahlem experienced Attention Deficit Hyperactivity Disorder (ADHD) and impulsivity when he was younger, which explains some of his teenage experiences. He hopes to foster connections with students so that they feel seen and confident – things that he struggled with in high school.

“I want the students I teach to feel safe, and I want them all to know — all 50 of them in Physical Education class — that I know them. I want them to know that I am a teacher who really cares,” he said.

Growing up in Mamaroneck, New York, and attending the small Rye Neck High School, Dahlem felt annoyed with the pressure to fit into a singular niche and to have one outstanding quality. He was involved in sports and music alongside other endeavors, and felt pressured to brand himself as just one: an athlete or a musician. That is why as an educator, he tries to see people for who they really are, not just what they might be known for. This is an example of how his own reflections on his teenage years have shaped his teaching style.

“Everybody had a niche, and it seemed like ‘that was what they did,’ and I didn’t like that. I didn’t like just being the kid who was the quarterback or the tuba player. I just wanted to be who I was,” he explained. “So when I say I want to be known, as a teacher I want them to know, that I know who they are.”

Beyond the classroom, Dahlem takes the same approach in trying to make sure every student feels seen. Striking up conversations, cracking jokes, and waving at students as they walk by are ways that he ensures they feel noticed and cared about.

“I think Mr. Dahlem is well known because of how outgoing he is to everyone. Even if you don’t know him, he will smile at you in the halls or crack a joke,” said Kiele Morgan ’23, a student in Mr. Dahlem’s Health class.

Dahlem’s revelations and knowledge as a Health teacher have motivated him to be an avid supporter of student mental health, especially during this 2021-2022 academic year. He loved seeing the shift towards mental health awareness amongst the faculty and administration during the period of remote schooling and the return to in-person classes, but also said that as the year has progressed, the emphasis on mental health has declined in favor of prioritizing work again.

“We need to celebrate more,” he said. “We’ve got to do more to celebrate 100% of the student body, and give opportunities to simply feel comfortable.” To do this, Dahlem proposed ideas such as having more recreational events during lunch periods, making after school events more student-friendly, and even holding a concert in the courtyard.

Mr. Dahlem is also a huge proponent of ninth grade Health classes. He believes it would equip students with knowledge, habits and resources that could help them deal with the stressors of school, before they become entwined in the busy Bronx Science life.

One aspect of Dahlem’s life that he brings into the classroom is his job as a volunteer firefighter: one special day every year, he brings his firefighting gear to the class, allowing students to try some of it on, and comically demonstrates how he can fit through small spaces, like under a student’s chair. The “fireman display” – as Morgan calls it – is well-known by the student body.

Thirteen years into the job, and about to be appointed as a Lieutenant at the department he works at, Dahlem has made volunteer firefighting a part of his identity. He began firefighting in 2008, following in the steps of his volunteer firefighter Uncle. His Uncle would take young Dahlem to parties at the fire department, which had a lasting influence on Dahlem’s perspective of the job. The physical caliber and mental toughness – especially in braving steep heights – required of volunteer firefighters, posed an enticing challenge to Dahlem as he got older. He can confidently say now that he has overcome his fear of heights.

“I thought that it would be a great challenge – something new,” he said. As for his soon-to-be promotion, he is proud but wary, considering what power positions entail. “I definitely do not want to have a rank as Chief…I want to actually do the things you need,” he said, describing the Chief as someone who sits around and barks orders over a radio.

Dahlem attends weekly training sessions to maintain his physical fitness and efficiency in responding to fires. Sometimes, he gets called to work spontaneously. It is all worth it in the end, knowing that he helps people and saves lives, but it is a stressor on his family time.

Dahlem is a husband and father of two children: a twelve-year old boy named Aidan, and a four-year old daughter named Millie. Aidan has recently taken up track and field – running an impressive 6:16 mile – and Millie does gymnastics and soccer. Sports was Dahlem’s love growing up, and evidently, it is that of his kids’ as well.

“It is a love of his, really,” he said, discussing the positive mental health benefits he has seen track and field have on his son. Aidan has been diagnosed with Attention Deficit Hyperactivity Disorder and Obsessive Compulsive Disorder, both of which Dahlem says have reduced in symptoms since Aidan started running in December. “I just want him to be happy,” he said.

As a result of Dahlem’s time being stretched thin between teaching, coaching, and volunteer firefighting, he realized he was not spending enough time with his family. This year, he decided against coaching in order to focus on spending more time with his family and children. The COVID-19 isolation period taught him a lot about balancing and focusing his energy. Although the decision was difficult, he wants to make sure he is there to watch his children grow up.

Dahlem has coached the Cross Country team, the Indoor Track team and the Junior Varsity and Varsity Baseball teams at Bronx Science in the past. He intends to return to coaching eventually, once his children are out of their younger years, but for now, he is a teacher and Dean at Bronx Science. Once he does return to coaching, he says he will finally “do it 100%.” Due to his other obligations, he feels he has never coached exactly the way that he wanted to. But he has amassed stacks of notes from his years of experience, and can’t wait to put them to use when he does return.

Instead of taking off grade points for late work in Health Class, Dahlem focuses on quality of what work his students do put out. His class is much more laid back, as students give answers to his questions without raising hands. “It has a big impact on the overall vibe of the class, as more of a community of people having a conversation rather than a strict lesson,” said Morgan.

Driving his teaching style is Dahlem’s appreciation for the students. That is, in fact, what he says he loves most about his job. “You know that you are going to have students who are academically strong, who are going to give you what they can. They’re there to learn; that’s a luxury,” Dahlem said. His experience teaching at other schools has taught him the value of students who actually want to learn.

“Especially in health, which is about communicating your feelings and experiences, Mr. Dahlem sets a good example of for all of us, not only as students, but as people,” said Morgan.

All in all, Christopher Dahlem reminds us all about the value of our health and happiness amongst the stress and deadlines. It is through the sharing of his experiences that he relates to the student body and has developed such a well-known persona, facilitating connections that he maintains throughout students’ four years at Bronx Science. Teaching affords him the opportunity to share his own life lessons with students, almost in a way that is like going back and teaching his old self. One of his most confident pieces of advice sums up his character quite well: “Happiness is paramount.”
“Especially in health, which is about communicating your feelings and experiences, Mr. Dahlem sets a good example of for all of us, not only as students, but as people,” said Kiele Morgan ’23.