The establishment of a French community in New York City brings a touch of France to downtown Manhattan. 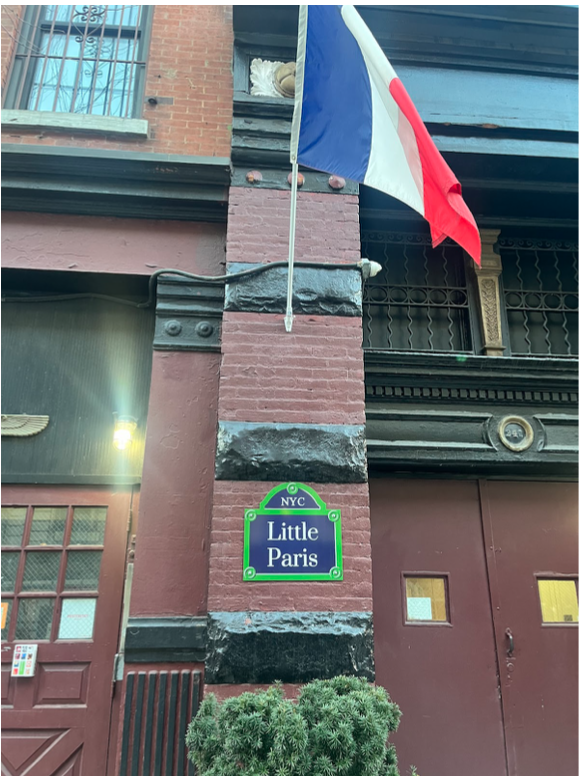 A 'Little Paris' sign, along with the French Flag, mark the official French quarters of New York City. It can be found on Centre Street in Soho.

New York City is a cultural melting pot. The city is known for its countless neighborhoods that provide a taste of their native food, language, and architecture. However, many New Yorkers don’t know of a little gem hidden in SoHo.

Little Paris is located in lower Manhattan and features a multitude of  French cafes, restaurants, and language classes. Not far from Little Italy, Little Paris is a small street that is beginning to root itself in the downtown New York culture.

Paris is known as the cultural capital – as well as the legitimate capital – of France. It is known for its sites such as the Eiffel Tower, Notre Dame, and the Arc de Triomphe. However, it is arguably most noteworthy for its cafes and nightlife. Paris is well known for its ‘hole-in-the-wall’ cafes and shops. Little Paris aims to replicate that experience through a conglomerate of cute French businesses.

Elisa Marshall and her husband, co-founders of Maman Cafe, started their business on a whim, wanting a side project that could become a new and unique spot for New Yorkers to get their morning ‘Cup of Joe.’ She explains that the French inspiration came from her husband’s background. “From an aesthetic standpoint, we wanted to make sure we created something that resembled the south of France,” she said.

After visiting Maman, Allie Smithie ’22 commented on the environment in and outside the cafe. “Maman was covered in vines and flowers, and so it felt almost like we were in an indoor garden.”  Along with the extravagant floral aesthetic, the cafe offers a ‘no-tech’ zone inside. “I really liked that it’s a laptop-free cafe, so the cafe is full of chatter and conversation. It makes for a very lively atmosphere full of people laughing and talking instead of looking at screens,” Smithie said. The food and drinks are also exquisite. “The food is delicious; I recommend the raspberry-rose white chocolate cookie, the honey lavender latte, and of course a croissant,” said Smithie.

After its tremendous success, the Marshalls noticed an influx of other French businesses opening in the same area. Elisa Marshall remarked to her landlord that it was “like the Paris quarters over here.” This commentary became the seed for a new neighborhood in New York City.

The community started as a project with her landlord after “we noticed there was a hub of French businesses opening,” Marshall said. She jokingly commented that the cafe “started from a passion of wanting to do too many things.” But the community grew, as businesses such as Coucou French Classes, La Compagnie des Vins Surnaturels, Troquet, and Clic General Store expanded. Elisa remarked that she and her husband are excited about New York City’s own homage to French culture and inspired by the potential for future business. She noted that “we are stronger together than as individual businesses.”

Léa and Marianne Perret, founders of Coucou French Classes, comment in Time Out that, “There is not yet an official French neighborhood in New York City and we feel it’s important for France to be represented in New York City’s urban landscape.” The street provides a Parisian feel, from the cute cafes and French-styled buildings to the Western European architecture of the former police department headquarters building, now known as the Police Building Apartments.

After having gone to Little Paris, it is safe to say that there is an undeniable French feel in regard to the businesses. However, the region is still small, and unlike neighborhoods such as Chinatown and Little Italy, Little Paris is still in the early stages of growth.

There is infinite potential for growth, given the 60,000 french residents in New York City who can bring their own take on French culture. In fact, as Elisa Mershall began to describe in her story regarding the establishment of Maman, France is a vast country with many diverse French subcultures. Each of the twenty-six regions in France has its own unique qualities, all of which could eventually be represented in Little Paris.