A deeper look into the history of the residential neighborhood of Forest Hills, Queens. 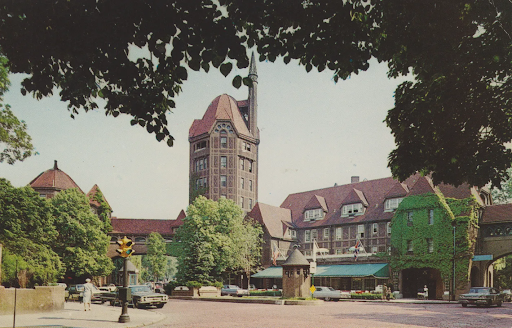 Picture this: you have just stepped off the R train to the 71st Avenue platform. As you exit, you may find yourself walking the lively sidewalks of Austin Street. A short stroll takes you to the historic Midway Theater, frequented by generations of Forest Hills natives since 1942, or to the magnificent Our Lady Queen of Martyrs church, originally modeled after the gothic Durham Cathedral in England.

For a picturesque snapshot of colonial America right in the middle of Queens, stand in Station Square. Situated near the Long Island Rail Road stop in Forest Hills, Station Square holds the same character it held on July 4th, 1917 when President Teddy Roosevelt gave his “One Hundred Percent American” speech shortly before the United States’ entrance into World War I in that same year.

In contrast to the typical asphalt concrete roads, the circular road is made up of a beautiful array of crimson red bricks. For those not as easily impressed, perhaps the colonial architecture will catch your eye  — whether it is the regal tower of the Forest Hills Inn, the complementary red colored roofs, or even the delicate windowed arches. Forest Hills’ lush trees adorn the red road with a vibrant green during summer, further adding to the small town charm.

Prior to the settlement of the Forest Hills area by The Dutch West India Company, the Rockaway, Lenape, and Delaware Native Americans inhabited the area. Due to the fundamental differences between the Native Americans and the Englishmen regarding private property ownership, Forest Hills was acquired for the price of three white clay pots. The development of the area to what is now Forest Hills first began with the founding of Forest Hills Park in 1895 by the architecture firm Olmsted & Eliot. In 1906, the Cord Meyer Development Company bought 600 acres of land near Forest Park and, consequently, named it ‘Forest Hills.’ On these lands, single family homes were constructed, and the area was further developed in 1910 when roads were laid down.

Forest Hills holds a small community called the Forest Hills Gardens. Margaret Sage, an American philanthropist who founded the Russell Sage Foundation, bought 142 acres of land in order to construct a neighborhood modeled after the garden communities of England. Grosvenor Atterbury, a renowned architect attributed to several innovations in construction, was commissioned by Sage to model the Forest Hills Gardens.

The historical beauty of Forest Hills has led to the dedication of many of its residents to preserve the beautiful architecture and significant historical sites. Michael Perlman  — a fifth generation resident of Forest Hills, a historian, and and a preservationist  — is on the forefront of this movement. Perlman writes articles for the Forest Hills/Rego Park Times, and he is a published author of the book, Legendary Locals of Rego Park & Forest Hills. An underlying theme of his works is a genuine passion for both the people and character of Forest Hills.

Perlman realized his passion for preservation after witnessing the demolition of the Trylon Theater Booth seventeen years ago. “I was disheartened,” Perlman said. “But simultaneously, it awakened the dormant preservationist within me. I wanted to make a difference in the neighborhood from then on, and to be as interactive as possible.”

This fervor led Perlman to establish the Rego-Forest Preservation Council, which is dedicated to protecting historical landmarks and buildings of cultural importance from being demolished. On the website, Perlman includes several petitions and fundraisers for restoration, along with lists of historical sites that are endangered. He also joined other preservation groups and partnered with Central Queens Historical Association’s historian Jeff Gottlieb to lead walking tours in Forest Hills.

“Once historical sites become endangered or demolished, all the history escapes. They are forgotten about, or left to be discovered in textbooks,” Perlman explained when asked about his muse behind preservation. Like many others, Perlman’s deep appreciation for Forest Hills has been passed down through generations. The hypothetical demolition of Forest Hills could mean the destruction of memories that successive generations hold of their parents or grandparents. It leaves us with nothing but lingering nostalgia for what we once had.

The Forest Hills Inn was a pocket of liveliness in the quiet neighborhood. Guests would partake in ballroom dancing, tea parties, and luncheons in the beautiful rooms of the Inn. The Windsor Room, which was the main dining room of the Inn, hosted dances on the weekends and dinner on weekdays. The Sidewalk Cafe in front of the Windsor dining hall offered guests a spectacular view of Station Square while they enjoyed a summer breakfast.

Today, it is now known to residents as Jade Eatery and Lounge.

A particular interest of Perlman’s is what was the Tea Garden in the Forest Hills Inn. The Tea Garden in its prime could be found behind an embellished gate on Greenway Terrace, which was also accessible through the Windsor Room. During warm months, guests would enjoy delectable cups of tea underneath the shade of lush trees on wooden rocking chairs. A line in The Forest Hills Bulletin from 1924 stated, “The Tea Garden of the Forest Hills Inn is a veritable fairyland when lighted with Japanese lanterns, with the trickling fountain heard in the background and a new moon shining overhead.”

Famous individuals from all over the country flocked to the Forest Hills Inn. The opening of the Inn and the movement of the West Side Tennis Club in Manhattan to Forest Hills in the same year of 1912 created public interest in this quaint garden community. In the mid 1960s, a “Celebrity Walk” was created in front of the Inn, which included handprints of Frank Sinatra, Barbra Streisand, Sammy Davis Jr., and Buddy Hackett.

The establishment of the West Side Tennis Club in Forest Hills was also followed by the construction of a 14,000-seat horseshoe shaped stadium which is now known by residents as the Forest Hills Tennis Stadium. The stadium’s first event was the finale of the International Lawn Tennis Challenge, where the U.S. defeated Australia.

The Forest Hills Stadium is not only a hub for tennis. Isolated from the city’s congestion and noise pollution, the stadium is situated perfectly for music festivals and concerts. Artists such as Frank Sinatra, The Supremes, Bob Dylan, The Beatles, Jimi Hendrix, Barbra Streisand, and The Who performed to lively audiences in the quiet Queens neighborhood.

Forest Hills is considered by many as a goldilocks medium between our current day and the past. However, the historical neighborhood is beginning to feel the consequences of the passage of time. Austin Street has become littered with garbage and is beginning to show signs of neglect. The Ramones mural near the LIRR station suffers from severe water damage; it was painted by artists Crisp and Praxis Graff in order to commemorate Forest Hills as the hometown of the punk-rock group.

Although it is important to preserve the architectural history of Forest Hills, resident Rajindra Ramkarran does not believe all change in our neighborhood should be resisted. When his mother’s neighbors on Nansen Street discovered that an immigrant family was looking to move onto the block, they sent a petition to the previous homeowner to prevent the sale from occurring. “The neighborhood definitely made you feel ‘the otherness.’ It made you feel like an outsider,” Ramkarran told me, when I asked him about Forest Hills in the early 1980s. Forest Hills is no stranger to discrimination. In fact, the Forest Hills Gardens has been notorious for discriminatory covenants for prospective residents.

“I’ve been here for about thirty-eight years now. I do feel like I belong here now, and I feel more comfortable being assertive and saying good-morning and good-evening to my neighbors. The neighborhood has become more accepting to people of color today, especially immigrants. Forest Hills is home to many immigrant families, but it wasn’t always that way,” Ramkarran explained as we discussed the recent changes taking place in Forest Hills.

Generations of my family have all had different experiences in Forest Hills. Fortunately for me, I’ve been able to experience a more inclusive and diverse community without losing the unique characteristics that many of the older residents strive to preserve. On warm summer days, I recall taking long walks with my Ajee (grandmother) through Forest Hills Gardens and admiring the beautiful homes, or spending time with my father and sister in Station-Square enjoying a fresh cup of ice cream. Despite the fact that Forest Hills residents come from all walks of life, a common love for our little center of the world ties us together.

But if you are aching for a taste of “Old Forest Hills,” Perlman recommends Eddie’s Sweet Shop on Metropolitan Avenue. This old school ice cream parlor is labeled as New York City’s oldest ice cream parlor. Stepping into the family owned shop will fill your sight with old fashioned wood topped bar-stools, marble countertops, and even little quaint tables and antique chairs for dining. All of the ice cream sold in Eddie’s Sweet Shop is made on the premises, using a recipe passed down through generations.

Forest Hills is an escape from the hustle and bustle of New York City, and it is right in the heart of Queens  — catch the R train to Continental Avenue Station and check it out!