Although the Omicron surge of COVID-19 is on the decline, booster shots are highly recommended by the CDC as a means of protecting yourself against future variants and surges. 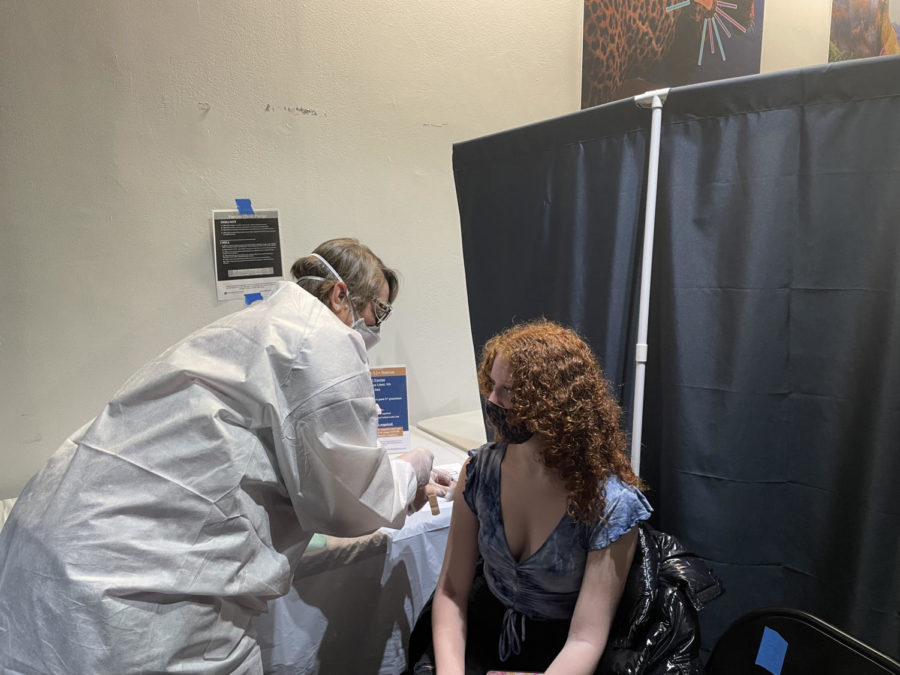 At the Natural History Museum, COVID-19 booster shots are administered in a side room of the building.

As I strolled through a narrow, unseen doorway, my eyes fixed on the large blue whale in front of me. The walls were adorned with images of aquatic life, and on the floor below me I could see patrons admiring the extravagantly modeled creature hanging from the ceiling. Despite the mild pain in my upper arm, I was relieved to be able to take my seat in the waiting area of the Natural History Museum after receiving my COVID-19 booster shot.

The experience of receiving my booster shot was similar to that of receiving my first two doses of the vaccine. After waiting in line for an hour or so, I was brought to a side room where all of the shots were being given, and talked to the nurse administering my booster shot. Then, I was moved to a 15 minute waiting area after receiving the shot near the iconic whale exhibit of the museum. The only differences were the band-aid-ed animals lining the walls and the pass that I received after my vaccine, which granted me a future, free museum admission to myself and three guests.

Over these past months during which time the Omicron variant has peaked, NYC Health has released data showing that  accounts for 98% of positive cases. Currently, there is a general decline in cases around the city. However, it is still extremely vital for any and all New York City students eligible to book an appointment for their booster shots, as protection against future variants and surges. Booster shot locations are becoming increasingly present around New York City, and everyone ages 12 and up are able to receive a vaccine.

If you are concerned about getting your COVID-19 booster shot or the effects of it, it is time to expel those doubts immediately; receiving the booster has been approved by the CDC and FDA for a number of months now and it has been received by many with little to no side effects.

I only felt a little tired the day after and just needed time to rest. Others, such as Isabella Randall ’25, felt differently.  “I did not have any side effects other than a sore arm for about two days.” Aside from feeling physically sick, there is also some concern around potentially missing school due to vaccine side effects, but nonetheless, protecting ourselves and those around us is more important than losing one day of classes.

If you still need to get boosted, use this link https://vaccinefinder.nyc.gov/ to find an appointment to keep yourself and others safe from COVID-19!
It is still extremely vital for any and all New York City students eligible to book an appointment for their booster shots, as protection against future variants and surges.