A Profile of the Actor, Dancer, Singer, and Model Zendaya

From her debut in Disney to the big screens, Zendaya has made an impact, not only on Hollywood, but also on a generation of young people who grew up alongside her as their role model. 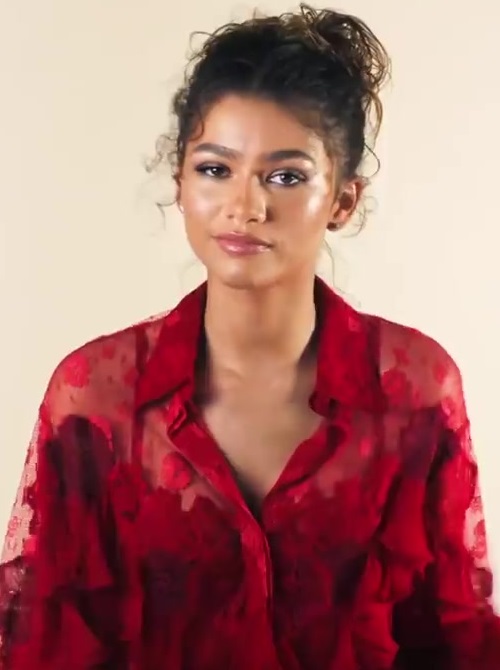 Zendaya is a revolutionary icon and celebrity for the younger generation.

She is Hollywood’s next big thing. With her varied résumé — as an actor, dancer, singer, and model — she is slowly taking over the industry. An icon, a role model, and a celebrity of her own making, Zendaya Coleman, or Zendaya for short, embodies how hard work and dedication can pay off.

She was introduced to the entertainment industry at a young age. Initially, a backup dancer, Zendaya danced her way to a lead role on Disney’s Shake it Up in 2010.

When I conducted a survey with Bronx Science students, about 60 percent of them said that they were first introduced to her as Rocky Blue, her character in the famous Disney Channel sitcom.

Saldon Tenzin ’24 said, “I think the representation she brings to the acting industry is great. She’s half African-American and back then, during the years of Shake It Up, most actresses were white. I think she not only proved she could do as much as her fellow counterparts but also showed others that a person of any race, gender, age, etc. could do it as well.”

During her Disney days, Zendaya appeared in multiple projects such as the 2012 hit Disney Channel movie Frenemies, alongside her co-star Bella Thorne. Subsequently, in 2014, she starred in the movie Zapped.

“Zendaya was so cool and funny in Zapped, and I just loved her character as a dancer, so much,” Mritika Rahman ’23 said. “Zapped is one of my favorite Disney Channel Original movies.”

Thereafter, Zendaya grew her fan base, even going as far as to write a book for her new pre-teen fans. Between U and Me was published on August 6th, 2013, and included personal photos, candid anecdotes, recipes, playlists, doodles, and advice from Zendaya to her fans. She told Business Wire in 2013, “The tween years can be really fun and exciting, but they can also be a tough time in a girl’s life. You’re just finding your voice and personal style…I hope this book will help girls through the tougher parts of the tween years and help them appreciate the fun parts.”

At 16, Zendaya returned to her earliest passion — dancing — by competing in the 16th season of Dancing With The Stars, where she was crowned runner-up. Eventually, Zendaya’s Disney contract came to an end, but not before she starred in and produced Disney’s K.C Undercover from 2015 to 2018.

“The only way I was going to come back to the Disney Channel was if I was in a position of more power,” she told Cosmopolitan in 2016. “One thing that is really important to me is diversity on the channel. It’s hard as a young person of a different ethnicity or background to look at the TV and not see anyone who looks like you. Representation is very important.”

Fairuz Raya ’23 agreed with the representation that Zendaya brought to Disney. She said, “Zendaya is a tall woman of color. She carries herself like the icon she is and is the representation that I loved seeing as I grew up. I’ve always been insecure about my tall height, but then I see Zendaya trailblazing her way through Hollywood, and I am reassured.”

With her daring, bold looks, Zendaya has made a name for herself on the red carpets. She also made headlines for her advocacy on diversity and is not afraid to call out the systemic racism that is prevalent in Hollywood. At the 2015 Oscars, Zendaya wore an elegant off-the-shoulder ivory gown. While the beautiful gown was already attention-grabbing, it was Zendaya’s dreadlocks that garnered negative social media attention.

When the E! News reporter Giuliana Rancic made negative commentary on Zendaya’s dreadlocks, stating that they must have smelled of “patchouli,” the teen responded with a widely applauded Instagram post. “There is a fine line between what is funny and what is disrespectful,” part of the Instagram post read. “… There is already harsh criticism of African American hair in society without the help of ignorant people…My wearing my hair in locks on an Oscar red carpet was to showcase them in a positive light, to remind people of color that our hair is good enough. To me, locks are a symbol of strength and beauty.”

This would not be the only time that Zendaya would call out disrespect regarding her appearance.

The same year, Zendaya posed for the cover of Modeliste magazine, but she wasn’t happy when the photos came back with heavy touch-ups on her hips and torso. “These are the things that make women self-conscious, that create the unrealistic ideals of beauty that we have,” she wrote in her Instagram post calling out the magazine. “Anyone who knows who I am knows I stand for honest and pure self-love.”

Modeliste pulled the edited photos before the issue was published, and released a letter from the editor thanking Zendaya for addressing the situation. “We are proud that Zendaya has taken this as an opportunity to address this situation, and create a very necessary honest and open dialogue,” the Editor-in-Chief, Amy McCabe, wrote.

Furthermore, her interest in the fashion industry grew in proportion to her career. In 2016, she became the face of CoverGirl, expressing her delight in joining the work of powerful, beautiful, and strong women of different races and ethnicities.

She went on to create the clothing line ‘Daya,’ which was made with the intent of being gender fluid and accessible for everyone.

Not only was her impact felt in the fashion world but also amongst the music industry.

After her hit album, she featured in music videos and albums such as Finding Neverland: The Album — the musical companion to the Broadway musical by the same name.  In 2016, she appeared in Taylor Swift’s ‘Bad Blood’ music video, dropped the single ‘Something New’ featuring Chris Brown, appeared in Beyoncé’s Lemonade visual album, collaborated with Latin pop singer Prince Royce on the song “X” in 2017, and finally starred in Bruno Mars’ ‘Versace on the Floor’ music video that same year.

In addition to music, she broadened her career experiences by being cast as MJ in Marvel’s Spider-Man: Homecoming (2017), her first feature film. She reprised her role for the trilogy with the latest movie Spider-Man: No Way Home (2021) which broke both domestic and international box office records.

Zendaya was also a part of the hit movie musical The Greatest Showman (2017), which was nominated for best original song at the 2018 Oscars for ‘This Is Me.’

In 2018, she started voicing characters in animated films like Duck Duck Goose and Smallfoot.

The following year, she went international by becoming a global ambassador for Lancôme, a beauty brand that sponsors other actresses including Lupita Nyong’o and Julia Roberts.

Zendaya teamed up with designer Tommy Hilfiger, in 2019,  for a collaboration that featured Black models ages 18 to 70.

She released more films, taking on the role of Folao, for the second season of Netflix’s The OA, starred in the two-person cast of ‘Malcolm and Marie’ alongside John David Washington in 2021, voiced the iconic Lola Bunny in Space Jam: A New Legacy (2021), and was featured in the sci-fi film Dune (2021) alongside Timothée Chalamet, Oscar Isaac, Jason Momoa, and others.

In her most recent project, she plays Rue, the lead role for the HBO original series Euphoria, which landed her an Emmy, making her the youngest woman to win the best actress in a drama series award.

Tenzin noted, “She’s contradicting all these claims that people made about her being a mere Disney actor. A ‘Disney actor’ usually stays in the world of shows and movies for kids and teens, but she made it out from that and succeeded brilliantly. She has inspired me as a young woman, and I hope to see her in new movies this year.”

Zendaya continues to be an inspiration to all with her honest personality, as well as her calm, cool demeanor. She continues to prove how much she deserves to be in Hollywood with her several sensational talents. We have just seen the beginning of what will be her award-winning career.

To see more of Zendaya, an episode of the second season of Euphoria is currently being released every Sunday on HBOMax.
“She’s contradicting all these claims that people made about her being a mere Disney actor. A ‘Disney actor’ usually stays in the world of shows and movies for kids and teens, but she made it out from that and succeeded brilliantly. She has inspired me as a young woman, and I hope to see her in new movies this year,” said Saldon Tenzin ’24.