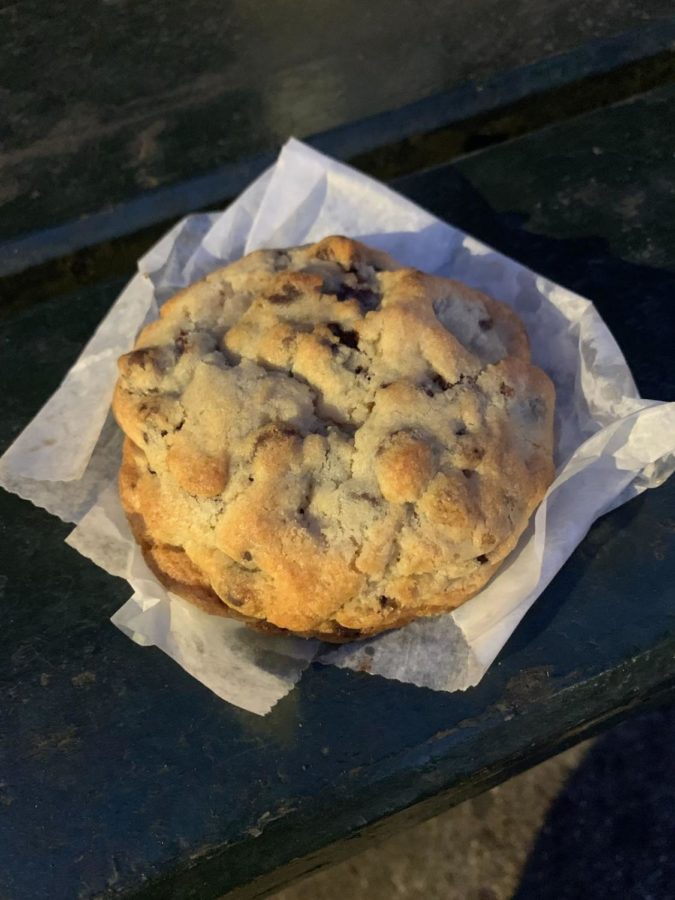 Randall isn’t the only one who has fallen in love with Levain Bakery and their offerings, however. Levain has already created a loyal customer base that loves the unique brand of their larger, more substantive cookies.

The bakery opened its first store on West 74th Street in Manhattan, a small but welcoming storefront, with a dark blue awning and golden lettering. But the real value lies within those doors, between the staff, and, of course, in the cookies themselves.

“I remember going with my brother the day that Levain’s opened — there was a gigantic line outside the door that went halfway down the street. It took forever, since there were only a few cash registers, but it was worth it. We got cookies for the whole family, and it was fantastic,” said Declan Hilfers ’22, whose favorite cookie is also the two chip chocolate chip.

When you first walk into a Levain bakery, you will see a display box to let the customer know just what they are about to eat. What does that consist of? Let’s start with Levain’s marquee item — their cookies.

The cookies from Levain Bakery, in contrast to what you might get at another venue, are large in all dimensions, with a muffin top shape concealing a heap of delicious batter and fill-ins.

“It’s a rare occasion that I myself can actually finish one of Levain’s cookies in one sitting. They’re like a full meal condensed into a single cookie,” said Joaquin Guevara-Ho ’22, who enjoys the generic chocolate chip cookie the most. As Guevara-Ho noted, one of the most notable aspects of these cookies is their size. The indulgent 6-ounce treats are much larger than a normal cookie that one would find at a regular bakery, allowing them to be extra gooey on the inside.

“My favorite part about Levain cookies is that they’re warm and gooey on the inside, and they melt in my mouth,” said  Vaibhav Hariani ’22, a chocolate peanut butter chip lover. Hariani normally buys Levain’s cookies when he is out with his friends, as it is hard to justify buying one for yourself alone. “I have only eaten a cookie solo once, and I always drink a lot of water after finishing one,” Hariani said.

The general consensus is that Levain cookies are good, but controversy lies elsewhere — in the pronunciation of the store’s name. During a conversation about it, I was surprised that my friend pronounced Levain as “Luh-Vuhn.” However, after bringing up what I thought to be a silly mispronunciation (I had always pronounced it as “Luh-Vayn”), it led to a heated argument.

“The name comes from a French word, pronounced “Luh-Ven,”” said Randall, a frequent visitor of Levain. She believes that the owners based the name off of the French word for leaven, which is Levain.

“I pronounce it the way it’s supposed to be said: Luh-Vayn,” said Hariani. Hariani has been going to Levain Bakery for as long as he’s lived in New York, so he should know how it is pronounced (not that I’m biased).

He has always heard people referring to the bakery as “Luh-Vayn,” a name based off of the American pronunciation of levain, a sourdough starter. Other variations of the name exist, but the most heavily disputed versions are “Luh-Ven” and “Luh-Vayn.”

No matter how you pronounce it, though, most people will know what you’re talking about, since Levain is so iconic among New Yorkers; in published reviews and on social media, the bakery is often referred to as having “New York’s Most Famous Cookies.” Many visitors flock to New York to try these giant baked goods direct from the bakery, and Levain even delivers to other states. Although the cookie is their most famous treat, they also have a variety of other delectable items, such as scones and croissants, that their customers can enjoy along with their coffee or tea.

Levain offers a gluten-free cookie option that tastes almost the same, or even better, some believe, than their regular cookies. This makes their famous cookies more accessible to people who are not able to include gluten in their diets. “I’m glad they have this option, since some of my friends are sensitive to gluten,” said Delara Moussavi ’22, who usually gets the chocolate-chip walnut cookie.

Levain Bakery was originally one small store on the Upper West Side, but it has since opened up stores all around New York City, and even expanded to other cities and to frozen cookies. However, the Upper West Side location is still the most popular and famous site from which to get their chocolate chip cookie, and there is usually a long line outside the doors. “At any rate, Levain is a staple unique to New York City,” said Guevara-Ho.
“It’s a rare occasion that I myself can actually finish one of Levain’s cookies in one sitting. They’re like a full meal condensed into a single cookie,” said Joaquin Guevara-Ho ’22, who enjoys the generic chocolate chip cookie the most.