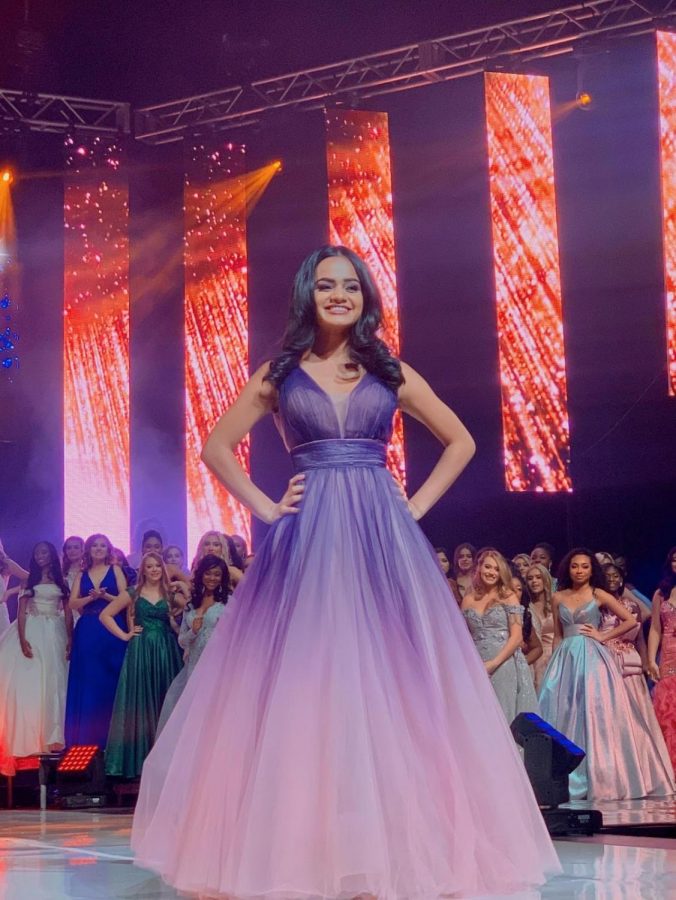 A finalist in the New York State 2020 Miss Teen USA pageant, Zoya Garg '21 said, “I had never in my life done anything even remotely close to a pageant. I am used to being on display in different ways with sports. In golf, you’re on your own, except when you miss shots, which is seen by the public. Flag football is the same way -- if you miss a catch, everyone sees it. But I had never done something that was solely about how I spoke and how I presented myself. I feel that I learned so much from the experience,” Garg said.

Zoya Garg ’21 is exceptional. Senior Council president, captain of both the Girls’ Varsity Flag Football and Girls’ Varsity Golf teams, and President of our school’s Latin Club, Garg has deeply involved herself in the Bronx Science community. A future Stanford University student starting this fall, a full-time tutor, a yoga instructor in training, a New York State finalist for Miss Teen USA, a featured interviewee for The New York Times, an experimental baker, a great friend, and a supportive daughter and big sister, Garg is much more than the sum of her academic accomplishments.

As someone who is constantly giving herself new goals, Zoya Garg embraces the challenges of  Bronx Science with great enthusiasm. Twice during our interview, she said, “Bronx Science rocks!” One of the major benefits of Bronx Science is the vast number of opportunities it offers, whether it is with diversity in courses, clubs, and sports, or activities outside of school. “It’s easy to pick an extracurricular up and say ‘this isn’t for me’ and then join a different club or a different team,” Garg explains. Garg has no regrets about trying various new activities during her ninth grade year. Regarding her brief membership in the Speech and Debate team, she said, “I really liked it, but I felt like I got to know more people at school through smaller clubs.” Her year of experimentation not only set her up for three more years of activities that she genuinely enjoyed, but also taught her a valuable lesson as well. “You have to look for it,” she said, explaining the importance of taking initiative and being a risk taker.

“Putting myself in uncomfortable situations propels me. I get comfortable with the idea of failing, and then I take more risks,” Garg said. I ask if she likes doing things outside her comfort zone. She explained, “I really like trying new things. That’s how you grow, right?” Garg continued. “I’m not doing it right, unless I was uncomfortable and I feel like, ‘Oh, I overcame this.’”

One of her biggest challenges cropped up when her mother signed her up, without her knowledge, for a New York State Miss Teen USA pageant during her junior year. Garg took it in stride, hoping to gain something new from the experience. She describes the chaos that she encountered when she arrived at the pageant: “Girls were practicing for their interviews by speaking to walls. While I definitely felt out of my element, I was inspired by how the women around me were putting themselves out there.” Garg learned to do the same that weekend.

Garg described an encounter with a teen from Yonkers competing in the pageant. “I was so scared that I would fall all over the huge poofy dress that I was wearing, or that I would forget to speak when they announced my name. Some of the fears were irrational, but more than anything else. I was worried about making mistakes in public.” The Yonkers competitor, seeing how nervous Garg was, told her to look around at all the women who were supporting each other for taking a risk. Now, Garg looks for opportunities to lift others up, the way that the Yonkers competitor did with her.

Empowered by her own experimenting, Garg tries to encourage friends and family to do the same. When she notices that there is something that they have always wanted to try, she uses her considerable positive energy to help them. During Garg’s sophomore year, she began to notice that her mother, who had given up her career to raise children, wanted to start working again. “She was always the funniest person in the room or at the dinner table,” Garg said. “I did not want her to sacrifice her own passions for our family, as she deserved to have both.” For her mother’s birthday, Garg wrote out by hand for her mother over a hundred notes that she had received through e-mails from friends or family that all shared the same admiration for her mom and her talents.

After only a few months of receiving the gift filled that filled her with encouragement, Zarna Garg found the courage to perform her first set in a New York comedy club, and become such a success that she performed later that year at Caroline’s on Broadway. Garg jokes that, at this point, she has been promoted from number one supporter to personal assistant. “I am editing videos, taking notes during her meetings, and enjoying every minute,” Garg said.  She also explains how she is taking on more responsibility at home. “My mom took so much of that burden and now all of us help her,” she continued. “I have had to step up in a more supportive role for my younger brothers and take on more household responsibilities, but it all becomes so worth it, whenever I see her on stage.” Garg does not deny that it is scary to put yourself out there, but she has never regretted doing it, and she believes the people she has helped do not regret it, either.

A highlight of Bronx Science for Garg has been winning her first student election and working as Senior Council President during the 2020-2021 academic year. “I had never done something like that before — I had only ever run for a leadership position within a community where I knew everyone really well, and the Senior Council President election was so public. It was similar to the pageant, but even more of a challenge for me, because it was with people I knew well and a community that I deeply respected, because I love everyone at Bronx Science. That was scary, but it was nice to see all those people come out and support me whether or not they were voting for me. Everyone was out supporting me by giving it a chance. I try to do those things for others.”

Garg’s schedule is demanding and busy, but her yoga practice has kept her rooted. “Yoga is the one place where I can shut everything off and focus on what I need both mentally and physically. Practicing breathing, movement, and gratitude a few times a week has kept me present throughout my time at Bronx Science.” Even beyond yoga, Garg says that her activities rarely feel like a burden. “I genuinely love everything of which I am a part.”

All of Garg’s activities are in some ways a challenge. Perhaps the most daunting of these is her pursuit of excellence as an Indian woman in fields that are traditionally male and dominated by Caucasians. Flag football, golf, student government, Latin and classics in general — none of these intimidate Garg. “One of the reasons that I try not to focus on the stress of all of these tasks is because I feel like I am on to something important,” Garg noted. Recently, Garg was tasked with recruiting ninth graders to join Latin club. She made a concerted attempt to attract all different kinds of members. “Now it’s such a diverse group of voices in what is thought of as such a Caucasian and male dominated realm of academia. Just knowing that I was able to contribute to this movement makes me so proud,” Garg said. She understands the importance of representation and helping others to see that they can belong in whatever field in which they are interested. “Representation grows more representation,” Garg said.

Garg is someone who is more excited about her friends’ birthdays than they are, an endearing over-thinker and over-preparer, and someone who cares deeply about her passions. She is always looking for new challenges to help her grow.  Zoya Garg’s willingness to take risks, her humor, and her grace, are all the secrets to her success.