A profile on this year's Valedictorian and Salutatorian. 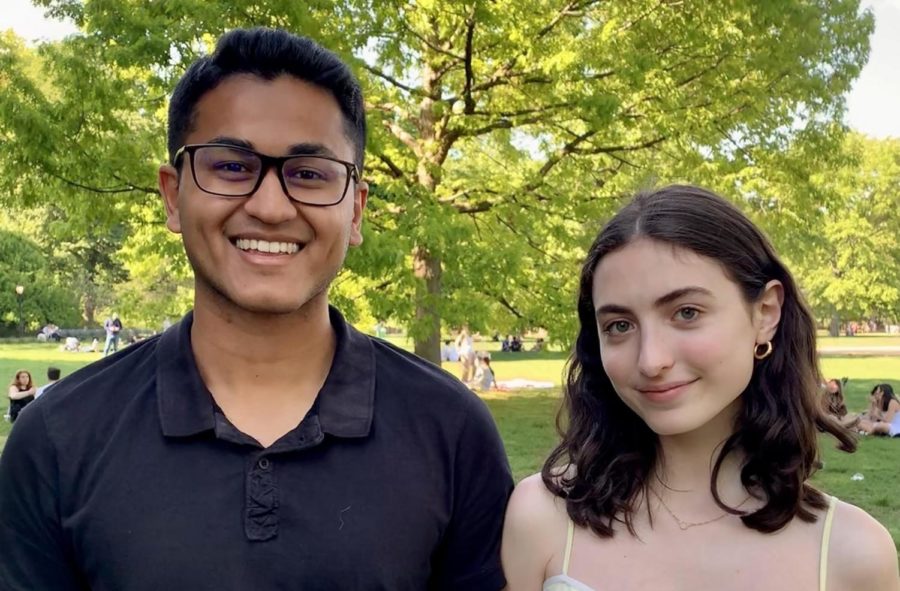 On Thursday, June 24th, 2021, the Class of 2021 graduated at the world-famous Arthur Ashe Stadium with friends and family joining them in-person or online via livestream. Ayanava Ganguly ’21 and Enza Jonas-Giugni ’21 are this year’s Valedictorian and Salutatorian respectively, and they have achieved these high honors amidst a year full of unprecedented challenge and adaptation, due to the Coronavirus pandemic. Both students spent a year and a half of their high school career engaged in fully remote learning.

Ganguly has a GPA of 99.32, and Jonas-Guigni has a GPA of 98.86. While they worked very hard in school, both students strove for excellence outside of academics. Outside of school, Ganguly spent his time perfecting his debate skills as co-captain of Public Forum and conducting research at Memorial Sloan Kettering Cancer Center and his home. He was also an active member in NHS, Big Sibs, the Current Events Forum club, and is a part of the Bronx Science Varsity Soccer team this year. Jonas-Giugni displayed her leadership skills as captain of the Speech team and a Big Sibs Director, and also spent her time as an editor of The Science Survey and the NYC Periphery Literary Magazine, performing for the Wingspan Arts Theater Conservatory, and conducting research.

The Bronx Science Speech and Debate team has played a vital part in creating both of their unique high school experiences. “Debate is where I first came out of my shell and integrated myself into our Bronx Science community. It’s where I developed my own voice, and where I found a family that has supported me throughout my career,” said Ganguly. Jonas-Giugni is equally as thankful. “Whether I was reflecting on the experience of meeting my 10 donor siblings in a poetry program of my own creation or dramatically acting out the final scene of Inside Out with my Duo Interpretation partner, speech gave me an outlet to express myself and have fun,” said Jonas-Giugni.

Both Ganguly and Jonas-Giugni fiercely believe in the transformative nature of education. “For me, education is an opportunity to expand my perspectives and become a better person in my community,” said Ganguly. “Education means wrestling with ambiguity, engaging in open forums of discourse, considering the familiar through unexpected angles and new perspectives, and expanding my narrative imagination by analyzing literature alongside its historical context,” said Jonas-Giugni.

Both STEM and humanities classes have stimulated Jonas-Giugni’s intellectual curiosity. “In my AP Calculus BC class with Mr. Fomin, I learned the importance of grappling with incongruous truths by considering Gabriel’s horn, a provable mathematical paradox concerning a solid which has finite volume but infinite surface area. In American Studies, the debates which arose every time Dr. Davis or Dr. Abrams asked, ‘Who is an American?’ illustrated the value of attempting to respond to questions which have no singular answer,” said Jonas-Giugni.

As he reflects on his Bronx Science experience, Ganguly will remember AP Physics 1 with Mr. Seoh as his most challenging yet favorite class. “The class forced me to change the way I thought about the world as a physical space and provided me with a different lens to view every day moments— now, when I kick a soccer ball, I’m reminded of our kinematics unit where we discussed projectile motion,” said Ganguly.

Regardless of what class they were in, both Ganguly and Jonas-Giugni always stayed on top of their work during their four years at Bronx Science, bringing them to the top of their class. “When I was told about being Valedictorian, I was quite surprised, but once that wave passed, I felt very honored. Throughout my Bronx Science career, I have come across so many talented, bright individuals well deserving of this honor, too. Having the opportunity to represent the whole grade at graduation is something that I cherish,” said Ganguly.

“To me, being Salutatorian is a testament to the supportive environment of Bronx Science. In my ninth grade year of high school, I was diagnosed with cancer and had to go on medical leave for the remainder of the year. Before returning to school in the fall of my sophomore year, I was so nervous about reacclimating! On my first day back to school, after a few hours in the building, I went to the second floor girls bathroom and just cried tears of relief. I had missed the Bronx Science community so much. All of my teachers and classmates were so welcoming, and treated me like I was just normal Enza. They made me feel confident about the scarves that I wore to cover my bald head, and were there to listen when I was finally ready to discuss the details of my treatment,” said Jonas-Giugni.

Ganguly and Jonas-Giugni will undoubtedly continue to do great things in their future. Ganguly looks forward to studying Biology and Statistics at Princeton University this coming fall. “I can see myself entering the field of either Public Health or Immunology through the lens of a biostatistician, someone who can analyze big data to find patterns and trends in our combatting and handling of disease,” said Ganguly. As evidenced by the current Coronavirus pandemic, Ganguly’s passions will translate into highly necessary work.

Jonas-Giugni will attend Yale University in the fall. “I value interdisciplinary learning and a liberal arts education, so I’m just looking forward to being able to write a philosophy paper on John Locke one moment, and then close my laptop and head on over to a Mathematical Analysis class the next,” said Jonas-Giugni.

The two have some essential advice for those still in their high school career. “When making your choices, whether it is with what clubs to join, what classes to take, or who to befriend, choose in the way that makes you happy, not in the way that you think that you are expected to choose. At the end of the day, it is your life that you are shaping, and that deserves the respect to be under your control,” said Ganguly.

Jonas-Giugni agrees that happiness is a priority, and understands how easy it is to fall into a trap of thinking that having exams and work means you cannot have fun. “Once I finally stopped feeling guilty about taking a break from my homework to hang out with my little sister Michaela, or to go to the Met after school with my friends instead of taking the BX10 straight home, I felt so much better! You should never feel guilty taking a break just to relax, to make some memories, and have a good time — you deserve it!” said Jonas-Giugni.

The two students give valuable, timeless advice, and their achievement, impact, and spirit will forever occupy a special place in Bronx Science history.