Gruson on lessons learned and the journey to his career in what he calls the “hidden utility.” 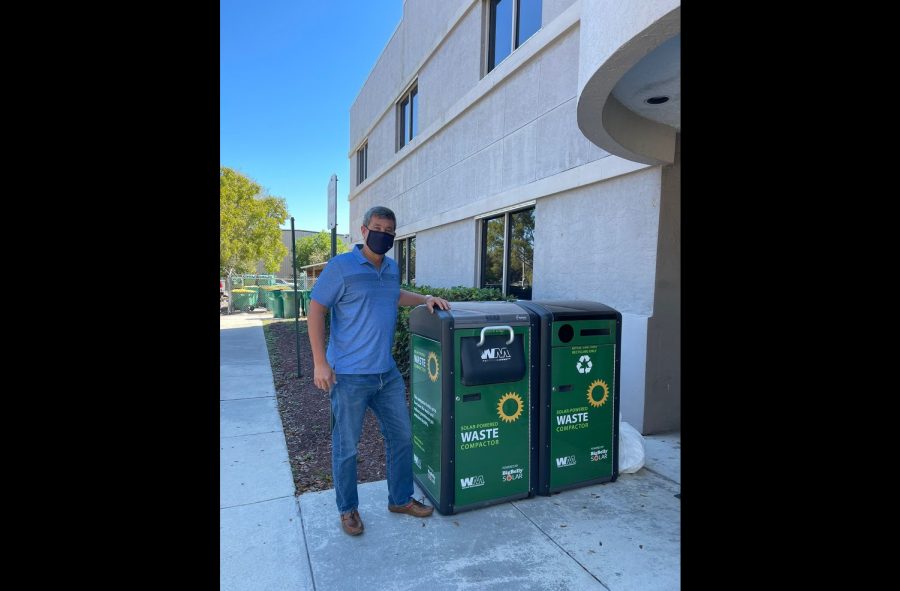 Gruson stands next to BigBelly waste and recycling units. Although recycling is useful, "recyclable does not mean impact-less," he warns, as is still a form of disposal. Consuming less and repairing are better alternatives — that's why "reduce" and "reuse" come before "recycle" in the three Rs.

‘Matter is neither created nor destroyed’ states the Law of Conservation of Mass. It simply changes form. Instead of sending matter to rot in landfills, Andreas Gruson ’87 diverts it to a better use in the circular economy.

Gruson works in what he calls the “hidden utility”: environmental services (EVS). “This deals with the handling, transport, processing, and ultimate disposition of ‘spent’ materials from consumers and industries,” he explained. A strong EVS industry is vital to the development and health of emerging countries. Having worked extensively in South America, Gruson has seen firsthand that without good environmental services, waste would rot in the streets and people would often get sick. “An economy cannot progress like this — full stop.”

EVS is also a key player in sustainability. Gruson noted that EVS should not be referred to as “waste management,” which implies the dated throwaway mentality of the linear economy rather than the thrift of the circular economy.

Historically, almost all materials have gone to rest in a landfill, a graveyard of sorts. But that is no longer the case. “This is not a waste business. We are redirecting resources back into the circular economy to be used as long as they are viable,” he explained. That means that materials once considered disposable — plastics, for example — are being remade and reused to the fullest of their potentials, whether it is as consumer products or for practical uses. That is the circular economy in action: it rejects this “end of life” concept and eliminates waste and pollution by design.

Gruson’s focus on the circular economy started in 1983, the year that he came to Bronx Science and took a shop class with teacher David Orlow, who became a mentor for Gruson. “He taught me to love metalwork and to always look for new opportunities, which I continue today at FleetGenius.” One of Gruson’s high school hobbies was to collect scrap metal and exchange it for money at a nearby metal plant. “I didn’t know it back then, but that was sustainability and the circular economy in action,” said Gruson.

After Bronx Science, Gruson attended the University of Pennsylvania and Columbia Business School. With scrap metal origins in mind, he ventured into investment banking in the EVS industry and, in 2000, bought a small waste company in Westchester. “The rest is history,” he said.

Gruson invests in, acquires, and manages companies focused on solutions for the circular economy. “I like to think that I made a career out of environmental sustainability before it was hot,” he said. He is currently the CEO of FleetGenius LLC, the chairman of Compology, and a board member of BigBelly Solar — the company responsible for the solar-powered trash compactors appearing all over the curbs of New York City and other large cities around the world.

No matter where Gruson’s career takes him, he abides by a guiding tenet: look for a big problem, and then find a solution for it. “You can build a business out of that. If you follow that rule, you’ll be successful no matter what.” He likes to give the example of BigBelly and trash pickup. New York City produces 12,000 tons of garbage daily. An average garbage truck can hold 12-14 tons. That makes over 1,000 garbage truck trips a day. Problems with this volume of trips include emissions, pollution, and the cost of labor. “The fewer times you send a guy with a truck to empty the bin, the better. Even 10% is huge,” said Gruson. Even outside of the huge reduction in expenses and GHG emissions, fewer truck trips every day mean less traffic, better air quality, and less sound pollution.

An additional issue is what EVS calls “vectors”: vermin, such as rodents and bugs. They eat garbage on the streets and multiply, posing a nuisance to humans at best and a threat to public health at worst.

If trash pickup, pollution, and pests are the problem, BigBelly trash containers are a solution. These closed containers can only be opened with a strong push on the foot pedal or a pull to the handle, cutting off a major food source for vectors. BigBelly containers also compress trash, meter waste, and send notifications for pickup only when they are full, reducing unneeded truck trips and streamlining the pickup process to the maximum. Additionally, they are solar-powered and self-sustaining (though they do need to be cleaned occasionally). For millions of urban dwellers, BigBelly’s innovative garbage bins mean fewer pests in the streets, lower labor costs, and less pollution all around — improving quality of life quietly but drastically.

FleetGenius was also a result of this problem-and-solution strategy. According to Gruson, there are 9 million steel dumpsters and several hundred million plastic waste containers in the United States. These constantly need to be cleaned and maintained, as plastic breaks and smells while steel rusts and warps. With 19 convenient U.S. locations, FleetGenius has the solutions. Its new SuperSuds system, for example, recycles and filters any wastewater produced, reducing water consumption by 90% from wasteful conventional methods. Plastic’s traditionally short life cycle poses another issue. Cracked plastic would typically be thrown away and replaced, but FleetGenius has pioneered plastic repair with its patented Poly-Welding process that restores to like-new condition. (If it is beyond repair, which is rare for FleetGenius’ expert welders, materials are recycled.) “Why build a new one with all the pollution, environmental impact, and cost when you have a perfectly good one that just needs some fixing?” asked Gruson.

Returning to the basics is at the core of Gruson’s job. The point is to fix things, be scrappy, and not give up on the usefulness of materials. “Consumerism and the need to own things took off in the boom years, the 1950s. Everyone needed to own stuff and replace it.” He’s happy to be part of the shift away from that mentality and go back to the attitude that reusing, repairing, and stretching should be the norm. “The shared economy is taking off, but it’s not just Uber and Lyft.We’ve gotten to a point where there’s a realization that you don’t need more stuff and can better utilize stuff if you share it.”

Most importantly, solutions should not be too sophisticated. “Don’t think too sexy — think basic,” said Gruson. Think about everyday objects or routines and their impact. What problems do they create, and how can you solve them? “Individually, sustainability could be as simple as making sure you turn the lights off when you leave a room. Also, be careful that you don’t create another problem when you solve one.” Gruson is a firm believer in the idea that small actions can have a compound effect; he advises against the passive ‘home-run’ mentality. “Don’t wait for the home run. You need to hit a lot of singles to make an impact.”

To all Bronx Science students, he has one more piece of advice. “Life is a winding road that doesn’t make a whole lot of sense at the time, but will when you look back on it,” he reflected. The important thing is, don’t stop and don’t stress too much. Enjoy the ride.”
“I like to think that I made a career out of environmental sustainability before it was hot,” said Andreas Gruson.