The Willow in Kew Gardens: A Mutual Relationship

How an independent, women-owned bookstore serves a Queens neighborhood, and how its community serves them. 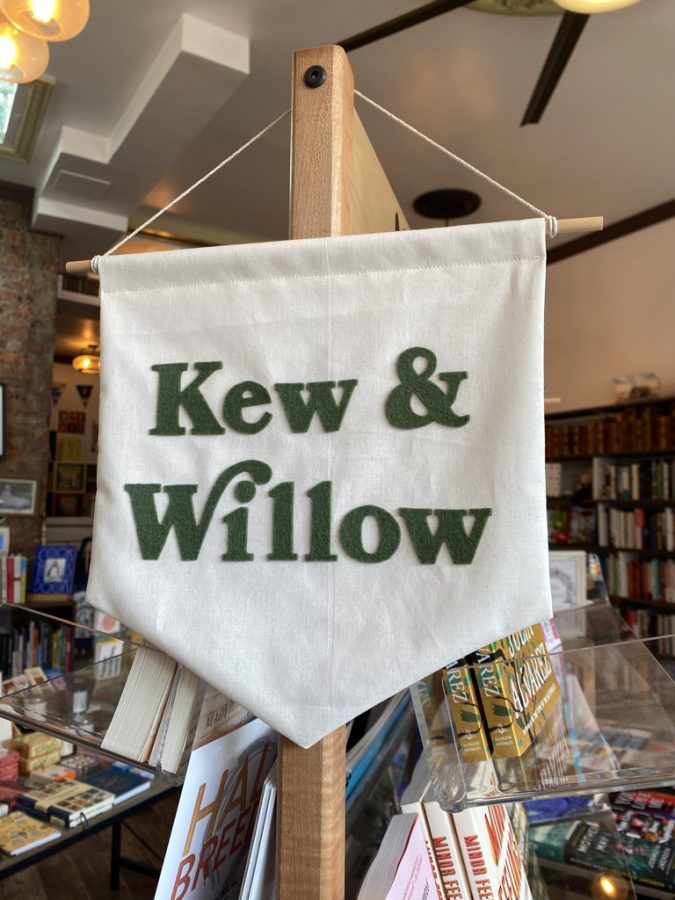 Kew and Willow is one of the only independent bookstores located in Queens.

I spent this past Christmas Eve 2020 like all of the others, finding the perfect last-minute gift for my loved ones. Due to the Coronavirus pandemic, most of my family’s shopping for one another had been done online, but there was one store that I had to browse through before the season ended — Kew and Willow, an independent bookstore located on Lefferts Boulevard in Kew Gardens, Queens.

The shop is small, a 750 square-foot space slipped between a local barbershop and a family-owned real estate office. Because of this, and New York’s COVID-19 guidelines for reopening, appointments must be made prior to visiting and are allotted to customers for either fifteen or thirty minutes. Three customers, at most, may occupy the store at once.

I had arrived a few minutes early to my appointment, so I waited outside of the bookshop, six feet away from a mother and daughter who were equally eager to peruse the multitude of books that awaited them inside. The weather on that day in December 2020 was brisk, but not below freezing, so I quite enjoyed studying the facade of the store, taking in its interior through the three large glass window panes.

Kew and Willow’s storefront is colorful, warm, and inviting to all who pass by. Canvas tote bags designed for book lovers adorn the window, which opens up to a well-organized display of picture books and miscellaneous novelty items. Children’s stories about Hanukkah, feminist memorization games, and eco-friendly stationery can all be found here. Once you enter the shop, there is an extensive array of books to explore, spread on tables in the center of the room and displayed on stacked wooden shelves along each wall. I chose to visit my usual spots: the “New and Loved” section to the right, the monthly themed table that awaits you as you walk in, and the enormous fiction display to the left.

I asked for help in finding a book for my aunt, a writer who introduced me to the bookshop. I had one request. I wanted a contemporary book written by a woman of color. Owners Vina Castillo and Holly Nikodem, though I did not know their names at the time, offered their assistance immediately. Instinctively plucking out novels from the fiction section like Little Fires Everywhere (“She already read that!” I lamented) and Crazy Rich Asians (“I’m not sure if she’d want a romantic novel,” I said), the owners seemed to have the anatomy of the bookstore ingrained in their minds, as they navigated its contents effortlessly. Though I settled on A Burning, a debut novel by an Indian author,  I noted their recommendations for myself (“Interior Chinatown — it won a National Book Award!” they remarked).

Vina and Holly founded the bookstore in 2017 with their friend Natalie Noboa. Vina, with her short curly hair, clear glasses, and contagious smile, was born in New York but “grew up all over.” She lived in almost every borough, stayed in Long Island and the Dominican Republic, spent “one random year in Florida,” and has been in Queens since her senior year of high school. Holly, a brunette with intelligent eyes and dark rectangular frames, is from New York but lives out on Long Island in Massapequa. Growing up, she spent a good majority of time “visiting family in Queens and friends in Manhattan,” so she has always been comfortable in the city.

The friends first met while working at the Barnes and Noble located in Forest Hills. After working together for about two and a half years, they received the disheartening news that the store was to be closed, in the summer of 2015. With this location shutting down, along with the two in Bayside and Jamaica, the coworkers had realized that Queens was left with only one independent bookstore to serve the whole borough — so they sought to establish their own. “We were in a group chat with everyone who worked with us at the now closed Barnes and Noble in Forest Hills,” said Vina. “I asked the group to open a store with me and that got the ball rolling to where we are today.”

The group had known they wanted to open in Forest Hills or Kew Gardens, but settled on the latter after two locals gave them a tour of the neighborhood. They found their location during that walk around town, and the locals remain regular customers to this day. To me, however, the decision surrounding the store’s location has always been predestined, as this neighborhood seems to hold great importance in the co-owners’ hearts. As a teen, Vina would frequent Kew Gardens, grabbing pizza from local restaurants and watching the nearby theater’s movies after school. For Holly, the neighborhood is right by the Long Island Rail Road, making it perfect for her commute.

The name of the store, of course, also takes from the neighborhood, hence the “Kew” in Kew and Willow. As for “Willow,” the group wanted to represent a tree in the store’s name to pay homage to the neighborhood where they met, Forest Hills. Taking inspiration from Harry Potter, a series that Vina is very fond of, they picked this plant because of the infamous Whomping Willow.

The path from the drawing board to establishment was not easy for the booksellers. When banks would not take them seriously in their search for startup capital, they decided to run a Kickstarter campaign and crowdfund the bookstore. Crowdfunding is a common practice for small business owners, as it allows them to fund their venture by raising small amounts of money from many different investors. “We figured if we really wanted to be a community bookstore, approaching the community we were hoping to serve and asking for their help and investment would be best,” said Holly.

The owners built a strong social media presence in order to promote the campaign, and they actively participated in several events in the Kew Gardens neighborhood to reach out to the community and spread the word. They set up pop-up shops to sell books at local coffee houses and organized tables at flea markets and community art days. After two hectic months, thanks to the support of more than 800 backers, the Kickstarter campaign resulted in funds exceeding their goal of 70,000 dollars. Many of their investors did not live in Queens, but understood the value in promoting independent bookstores and contributed nonetheless.

True to its goal (and its investors), Kew and Willow is a genuinely local bookstore that serves its community well. Wedged between bookshelves is a small mahogany desk replete with flyers, business cards, and brochures advertising local groups, authors, and businesses located in Kew Gardens. Here, I had found handbills advocating for Aleda Gagarin for city council, prints depicting the “reading list for the revolution,” leaflets containing recommendations from indie booksellers, cards presenting the Twister Twilogy series, and papers instructing customers on ways to buy Girl Scout cookies (with free shipping, of course).

Along with the bookstore’s earnest engagement with local talent and community members, there are several eclectic aspects that differentiate it from online retailers and other indie bookshops. Kew and Willow organizes blind dates with books for their readers, selling novels wrapped in Kraft paper and providing ambiguous, concise blurbs. It is home to Queens’ nerdiest gumball machine, which releases book recommendations and coupons instead of candy for 25 cents each. (All proceeds go to 1000 Black Girl Books, a campaign promoting literacy and girls’ education.) In winter, I received Daisy Jones and the Six as a recommendation, and this spring I received Making Friends, a middle-grade graphic novel.

The store’s inventory is large and diverse, reflecting the sellers’ own taste in literature. Although Holly claims that no bookseller truly knows their favorite book, she currently loves the Darker Shade of Magic by V.E. Schwab. Vina’s last read and new favorite is Clap When You Land by Elizabeth Acevedo, a novel that she believes accurately portrays the Dominican experience from a young adult’s perspective. “It’s the first time I saw myself and my roots reflected in a book,” she said, and recommended it to me when I asked for books with queer women protagonists for a friend’s gift.

I ultimately selected Her Body and Other Parties, a book of short stories, and Juliet Takes a Breath, a young adult novel, as the final two contenders. Holly helped me decide on the latter. “When giving a book, it might be best to give the gift of a single narrative rather than several short stories,” she said.

Similar to the plight of all small businesses during the pandemic, COVID-19 has severely changed the way that the bookstore has conducted its services this past year. “COVID really forced us to continuously reinvent how to serve our community,” said Holly. Because the Kew and Willow website had been well established prior to lockdown, she and Vina were easily able to redirect their customers there once the store shut its doors in March 2020. During those first few weeks, they spent their time ensuring the community that they were still there, now operating online instead of in person.

The owners began the transitioning process by utilizing the store as a warehouse, fulfilling orders from customers who were in quarantine and wanted to occupy themselves with activities like reading and jigsaw puzzles. Once they regained their stride and became comfortable in the virtual retail environment, Holly and Vina hosted several virtual events, such as author panels on a live video platform called Crowdcast, and storytelling on Instagram Live. The duo even started a book club on Zoom and held virtual discussions in which their customers could partake. Eventually, they were able to provide contactless curbside pickup and local delivery by hand, for Queens residents, and they created personalized care packages for them. Because of the owners’ creativity and resilience, the bookshop remained active throughout the Coronavirus pandemic, allowing customers to be able to browse its collections in person once again.

Yet for Holly and Vina, it was not themselves who kept the leaves of Kew and Willow nourished and alive during this difficult time, but instead its community of engaged supporters. “We managed to pull through the worst of the pandemic lockdowns primarily because our neighborhood wanted us to. They made it a point to order from us to make sure we’d be there when they could visit again,” said Holly. “So many people stop by now and say ‘We’re happy to see you made it.’

We respond with, ‘We couldn’t have done it without everyone’s support.’”