Dragons and Diligence: The Art of Nick Lin ’22

A slight perfectionist and Copic marker enthusiast, Lin has been honing his colorful fantasy style for years. 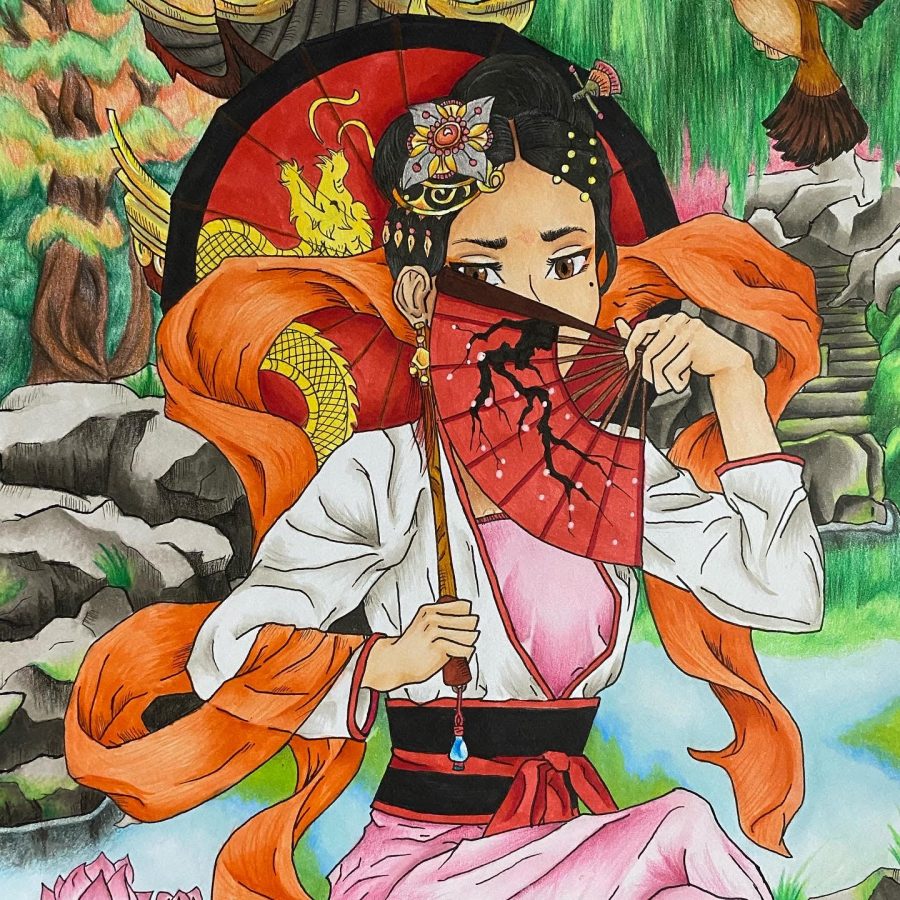 Nick Lin '22 submitted this drawing to the Copic awards last year. “My inspiration for this piece was a Chinese poem about Spring. I thought ‘Okay, you know what, since I’m submitting for this competition, I might as well do something around my heritage and my race,’” said Lin.

Observing Nick Lin ’22’s drawings, you feel as if you are staring through a portal to an alternate universe; the brilliant colors and creatures on the paper enchant you, drawing you into a fantastical world. The details betrays no evidence of human interference, and the pictures seem to radiate with a life of their own.

The process of creating these visuals is much less magical for Lin. Almost the entirety of the scenes in his works are drawn from memory, meaning that he has to take a trial-and-error approach to drawing. Lin will usually work for an hour and a half, then come back after a break to assess what he has done and what he wants to add. If he likes where the drawing is going, which is, according to Lin, not the majority of the time, he will continue and begin adding details.

It is easy to spot these subtleties while examining Lin’s pieces. In one black-and-white drawing of a steampunk machine (an Industrial Revolution-inspired contraption used in science fiction), hundreds of tiny dots line what appear to be clouds hovering over a dark Earth. Further upwards, scores of gears, some barely perceptible, turn against one another on the machine – a complex system of winding, shaded lines connect them.

For his more ordinarily colored drawings, Copic, a Japanese brand of refillable markers, is Lin’s secret weapon. The markers allow him to easily blend colors together, adding vividness and a bold neatness to each picture. When given the opportunity during an A.P. Physics class, Lin brought his collection out, speaking with such enthusiasm that one may have thought the markers were encrusted with diamonds.

Lin has also been featured on Copic’s U.S. Instagram page, which has nearly 140,000 followers. “I never thought I’d get recognition from the actual brand. I have a small following on Instagram. I usually rack up around 60 likes, but once they posted it, it received 1,482 likes. It gave me a sense of validation,” said Lin. The posted piece depicts a half-human creature interacting with two dragons; differing shades of orange, green, and blue coat the paper, a testament to Lin’s command of the markers.

Besides Instagram, this piece and several others can be found in last year’s edition of Dynamo, Bronx Science’s literary magazine. For Lin, finding places to feature his work and art competitions can be hard due to age limits and odd requirements (one opportunity he turned down involved drawing scenes from The Bible), but he is looking into the possibility of eventually winning an art scholarship.

Lin has also been looking to the future as he tries to juggle school and extracurriculars on top of his artwork. He admitted that drawing has become a lower priority for him during the pandemic, saying, “I’ve found so many more things to do that I’ve had to push art aside. I joined Science Olympiad, so that’s taking up three days a week. I also have prep on Fridays, Saturdays, Sundays, and for the SAT, and then, when I don’t have that many things to do, I’ll be studying or completing homework or playing games with my friends.”

It is hard not to be reminded of the fact that Lin is still a Bronx Science student from these remarks; there is a recognizable feeling of being in the (virtual) company of a slight perfectionist. Indeed this diligence is reflected in his artwork as well; the detail and naturalistic feel is not the result of a casual sketching session. As Lin mentioned so many times throughout his interview, there is an obvious gap between the bird that he sketched “really rudimentarily” in his Kindergarten art classes and the drawings that he creates today.

“[During those classes], I would see people who were doing full-on oil paints and really realistic stuff, and I would just keep getting discouraged. I would say to myself, ‘I’m never going to be as good as them.’ That was in my head for a long time. I kept drawing, and one day, I looked back at my profile with all of my past art; I hadn’t realized that I was improving until then, because I was always comparing myself to other people,” he said.