Dr. Jill Biden, an Educator at Heart and Our First Lady

A look at the life and legacy of Dr. Jill Biden. 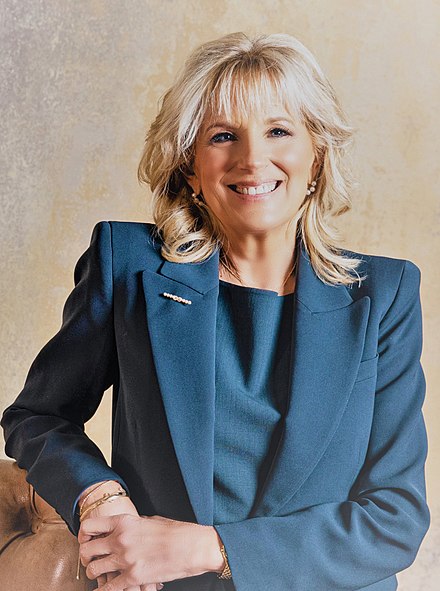 Photo by Cheriss May. Public Domain

One cannot discuss the life of Jill Biden without discussing her role as First Lady of the United States. To those close to her, however, she is not solely defined by the fact that she is President Joe Biden’s wife, but also by her life’s work as an educator. Dr. Biden has always said that teaching is not what she does, but who she is. In fact, she is the first First Lady to keep her job as a professor at Northern Virginia Community College, just as she did as Second Lady when her husband was the Vice President. Mr. and Ms. Biden have been married since 1977, surviving tragedy, illness, and the spotlight of public life.

Jill Jacobs grew up in Willow Grove, Pennsylvania, just outside of Philadelphia. As a child, Jill was headstrong and independent. She often clashed with and disobeyed her mother, and at night she would sneak out and run across the Pennsylvania Turnpike with a friend to go swimming. She married young at age nineteen, to a man named Bill Stevenson. The two would have a rocky marriage and would divorce five years later. She would go on to meet a U.S. Senator named Joe Biden on a blind date. Mr. Biden had lost his first wife and baby daughter Naomi in a tragic car crash in December 1972, and was sworn in to the senate at the hospital where his two injured sons, Beau and Hunter, were recovering.

In her memoir, Where The Light Enters, Dr. Biden talks about how it took Joe Biden five tries before she finally agreed to marry him. Since her first marriage had ended in heartbreak, she was reluctant to give her heart to a new man, not to mention one who was a public figure. Since their first blind date, Ms. Biden had grown close with not only Mr. Biden, but with Beau and Hunter as well. Mr. Biden has always talked about how he took Amtrak every day between Wilmington and Washington D.0.C so that he could tuck in his boys at night. During the day, Jill would take care of the boys along with Joe’s sister Valerie, often picking them up from school. When talking about how she made the decision to say yes to marrying Joe, Ms. Biden talks about how she did not want the boys to lose a second mother.

After she got married, Ms. Biden pursued a Masters in Education at West Chester State College. She had begun teaching English at St Mark’s High School in Wilmington while dating Joe, and it had become a passion of hers. After getting a second masters, this time a Master of Arts degree from Villanova, Dr. Biden went to teach English to disabled students at a psychiatric hospital. She describes this work in her memoir as some of the most fulfilling work she has ever done. All of this was done while her husband continued to rise in the political world. He was head of the powerful Senate Judiciary Committee and had a short lived campaign for president in 1988. Just like today, nothing stopped Dr. Biden from pursuing her career or her passions, and even as Joe Biden suffered multiple severe health issues, Jill was always by his side.

Throughout the 1990s and early 2000s, Jill Biden would teach English at multiple high schools as well as at Delaware Technical and Community College. She and Joe raised their daughter, Ashley, and Beau and Hunter started having kids of their own. The Bidens had a good, stable life, full of family and careers they loved. In 2006, however, Joe Biden was called into an important family meeting. He was widely expected to run for the presidency in the 2008 election, and he thought he was being brought in so that those ambitions would be put to rest. Instead, Dr. Biden and the rest of the family urged him to run. They believed that the time was right for someone like the then Senator Joe Biden after the turbulent years of George Bush’s administration. They were willing to give up their lives to help him because they believed in him. With the blessing of his family, Mr. Biden ran for the presidency.

After Barack Obama and Joe Biden were elected to the presidency and vice presidency, life changed for Jill Biden, now the Second Lady of the United States. Despite this, Biden was determined to keep teaching, breaking the glass ceiling and getting a job at Northern Virginia Community College, the same school she teaches at today. She goes by the name “Dr. B,” and many of her students don’t even recognize her. Those who do are pleasantly surprised, and pledge to keep it a secret from fellow students. Dr. Biden describes how the secret service dresses up as students and sits outside her classroom all day so they don’t blow her cover. For the students, however, Dr. Biden runs a normal college classroom and cares deeply for those whom she teaches.

Through two terms as Second Lady, the loss of her son Beau to brain cancer in 2015, and now as First Lady, Biden has continued to teach. It is truly a historic achievement.
Dr. Biden has always said that teaching is not what she does, but who she is.