Japanese Olympic Figure-Skater Yuzuru Hanyu and His Rise to Fame

Yuzuru Hanyu is the gold standard of preternatural skill and character, both on and off the ice. 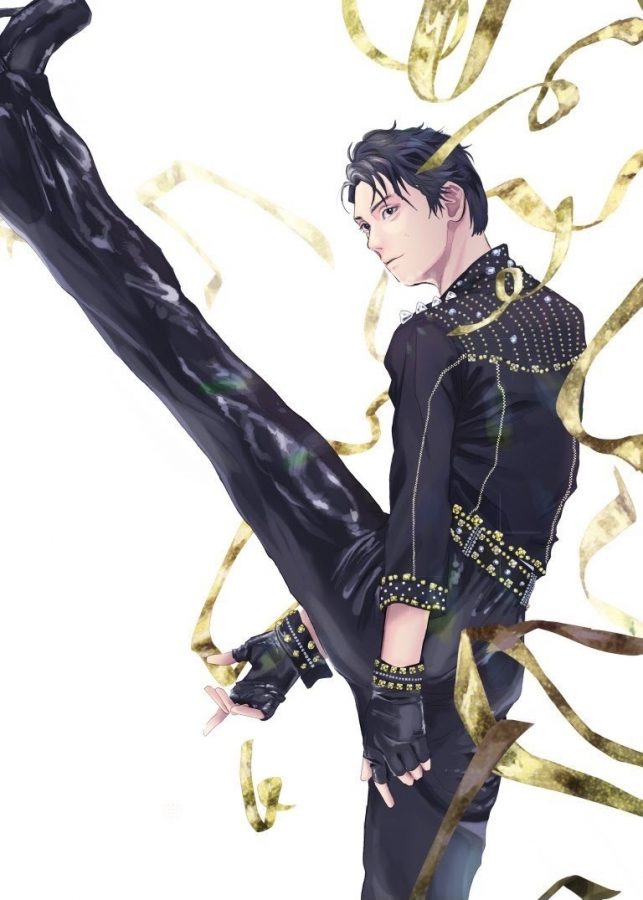 Yuzuru Hanyu’s 'Let Me Entertain You' program was held at the Japanese Nationals. Here is an artistic rendering of the moment.

At twenty-six years old, Yuzuru Hanyu’s accomplishments are nothing short of impressive. Having won two Olympic medals at the Sochi 2014 Olympic Winter Games at age 19, only to defend his title by winning gold again at PyeongChang 2018, he is the first Asian skater in the men’s singles category to achieve an Olympic medal. He has also broken 18 world records and counting such as the hundred point barrier in the men’s short program, two hundred points in the free skate, and exceeded the total three hundred points in the new +/-5 Grade of Execution (GOE) scoring system, proving that it is possible to go past the fluorescent yellow tape mark. Needless to say, Hanyu is the epitome of figure skating, with ‘The New York Times’ reporter Jeré Longman dubbing him “Michael Jackson on Ice.” However, behind those triple salchows and sharpened blades lies a person whose whole is greater than his parts, in that he is not limited to only his ice skating abilities but also a blend of charisma, humor, modesty, and values deeply rooted in Japanese culture.

Hanyu started ice skating at just four-years-old. His mother originally took him to his sister’s figure skating lessons as therapy for his asthma, but after watching the heavily publicized competition between Russian skaters Alexei Yagudin and Yevgeny Plushenko, Hanyu became inspired and entered his first novice-level competition at the age of ten.

Hanyu’s family has undoubtedly been a crucial part of his success. Their faith in him may have fueled his ambition at a young age, evident in an interview where he claimed that he could become a gold medalist, only to manifest it years later. Even though his family wholeheartedly supported his career, they also pushed him to do well in school, citing that he should not only have skating for show, and in September of 2020, he graduated from Japan’s prestigious “Waseda University.’

Part of Hanyu’s appeal comes from the grace with which he handles tragedy. In 2011, he was caught up in the 8.9 magnitude Tōhoku earthquake and tsunami, which killed 15,897 people. Later on, he revisited areas that were decimated by the disaster and recalled how he and his family were trapped in the school evacuation site for days without running water or food. He said that in the beginning, everyone got two small rice balls, but after a while, two people resorted to sharing one. He recounts his appreciation for the rock-hard food from the lack of hot water, by taking tiny bites. He described restless nights and the inability to practice, as his home rink was completely destroyed and how the situation still haunts him.

As he gave this interview, you could not help but feel for the victims as you started to see the gravity of the situation. In this way, he became an unofficial spokesperson for those who were caught up in the earthquake. Hanyu’s teary eyes and wavering voice remind us of his humanity, despite accomplishing amazing things. Yet if this earthquake taught us anything, it is that Hanyu will let nothing slow him down, and that includes natural disasters. Since then, he has attended sixty different ice skating shows to raise money and donated his Olympic winnings and previous campaigns towards Tōhoku relief. In addition, he conducted an ice show with other skaters and donated the royalties from his two autobiographies in order to rebuild his old hometown skating rink.

Hanyu is regarded as a beacon of hope for the victims; he went into his competitions to distract them and put a smile on their faces. He handled the immense pressure with poise at such a young age and his selfless attitude is remarkable. Hanyu stopped taking the ice skating rink for granted and relishes the spotlight every chance he gets. Even casual viewers can tell that he truly loves performing with the way he expresses himself through the motions in Notte Stellata, as a tribute to the victims at the PyeongChang Figure Skating Gala.

Having been a casual viewer myself with no knowledge of figure skating terms in weeks prior, I fell down the rabbit-hole of watching performances where he combines raw artistry and musicality with technique in order to create visually appealing, yet effortless arrays of jumps followed by toe sequences. My all-time favorite routine is “Parisienne Walkways.” If any one of his pieces could capture his “Michael Jackson” essence, it would be this blues-genre, electrifying performance. It does not come as a surprise that he broke the Short Program Olympic record in the men’s Figure Skating event at the Sochi 2014 Winter Olympic Games with it.

In “Parisienne Walkways,” there’s a correlation between the shrill, electrical, confident ring of the music and the way that Hanyu moves with such long, smooth, and high leg kicks. The way that he snaps up his head always fits the beat, and his sporadic jumps are never overused, but rather nestled in between his fluid turns at the end of every note.

He uses his arms often as well, raising and positioning them in ballerina form. In actuality, Yuzuru mimics a lot of the grace and rigor of ballet in his performance, taking it on ice instead. He goes from one sequence to the next, interconnecting the steps. This program is truly a masterpiece that draws out all parts of the music and Hanyu’s talents. An Instagram fan account by the name of “yuzuu.pooh” had similar thoughts. During the interview, they said, “Being a person who loves art in general, the way Yuzu moves, exuding so much confidence, fluidity, musicality, elegance, his shiny costumes…it was all very satisfying and pleasing to my eyes.”

Despite his “coolness” on the ice, both figuratively and literally, records are not all that Hanyu has broken. On numerous occasions, he has broken gender stereotypes and toxic masculinity. In this way, Hanyu stands out, if not already enough. His fans have a running joke that you can identify him in a crowd of skaters by spotting the most bedazzled and sparkliest costume. He is known for his over-the-top, colorful outfits like in “Let’s Go Crazy.” His body frame is also rather small, and “feminine.” But perhaps, most of all, he utilizes many moves that are popular in women’s figure skating that require tremendous flexibility like the Biellmann Spin.

As successful as Hanyu is, his ambition comes at a cost — his health. There are too many accounts to name in which he has been injured, leaving his fans nervous wrecks after he disappears for several weeks. He has always been one to reach beyond the limits, yet he does not consider his body’s boundaries. To become an Olympic champion, he relied on painkillers and sheer willpower in order to get through his programs.

On several occasions, he was worried that he would never skate again. He constantly seems to be in a race against the clock. With an ice skater’s prime being around 25 years of age and a new batch of young energetic athletes entering the field, Hanyu expressed his wish to jump the quad axel at Beijing 2022, a jump never done before in competition. However, people are worried about his health, especially considering his history of injuries.

After passing out and crashing into China’s Yan Han in the ‘2014 Cup of China’ during warm-ups, spectators were unsure if he would still perform. He was ushered off the ice with a bloody forehead and chin. However, against all odds and a quick trip to the hospital, Hanyu delivered an unforgettable performance with bandages wrapped around his head.

He fell during almost all his jumps, leading to deductions, but it was all the more emotional when he picked himself up over and over and attempted the jumps again, even though he had not fully recovered from his injury. His falls were stark in comparison to his usual clean skates, which made it harder to watch. He could have opted-out of the competition with his doctors’ and coaches’ recommendations, but he put his country and fans over his health.

That being said, Hanyu never lets his ambition get in the way of his sportsmanship. He stated that he feels most satisfied when all of his competitors skated well because it pushes him to try harder.  Many people credit him and the new wave of skaters with overturning the sour precognition of skating rivals such as the infamous Nancy Kerrigan and Tonya Harding duo or Aleksey Yagudin and Yevgeny Plushenko. Hanyu and his competitors are respectful of each other’s cultures and have even helped each other to learn various languages for worldwide interviews.

Although they are scored individually, skating has become somewhat of a team sport now. Hanyu hugs his rink-mates, conducts interviews, and spends time with them off the ice. Fans live for these friendships, especially Hanyu’s notable bond with Javier Fernández, the Spain representative. A perfect example of the chemistry between the skaters is the “This Is Me” performance at PyeongChang 2018. The figure skaters link arms and carry one another while dancing, eventually collapsing into a tight group hug.

Of course, none of this would be possible without the fans. Hanyu has said repeatedly that he feels grateful for all the love he receives from all over the world and that his fans are extremely respectful of his personal space. Many middle-aged women flock to his competitions in masses, holding signs and making banners with thousands of messages on them.

At the end of all of Hanyu’s performances, a “pooh rain” occurs. Inspired by his infatuation with Winnie the Pooh, fans throw plushies of the character instead of traditional roses onto the ice. Hanyu fans like to joke that he is single-handedly saving the Pooh toy industry. The mutual trust, dedication, and love Hanyu and his fans have for each other is remarkable.

Hanyu has certainly taken Japan by storm. Subways and public spaces are plastered with photos of the skater, and he is the youngest recipient of the People’s Honor Award, given by the prime minister. “While running my fan page, I’ve come to realize that there are many different types of people supporting yuzuru: people from other fandoms and people with other interests. For example, anime fans, K-pop stans, fans of other sports, elderly people, young people. I think that this joining of other fanbases helped spread and expand yuzuru’s popularity,” wrote yuzuu.pooh.

Despite his popularity, Hanyu and his family prefer to stay out of the limelight. “I’ve also noticed that he has a mysterious aura about him; he doesn’t share anything too personal, and doesn’t even have any social media, which I think just adds to his charm since it’s so rare nowadays.”

We know that Hanyu will continue to amaze us and break more records in the years to come. Although the COVID-19 pandemic has put a strain on his regular training schedule, this means that he has more time to rest to prepare for Beijing 2022.
“Being a person who loves art in general, the way Yuzu moves, exuding so much confidence, fluidity, musicality, elegance, his shiny costumes…it was all very satisfying and pleasing to my eyes,” wrote yuzuu.pooh.