The Style of a Poet: An Expose of the Poetry of Allie Smithie ’22

Allie Smithie’s unique poetry creates a fusion of macabre concepts and the true emotions of a teenager. 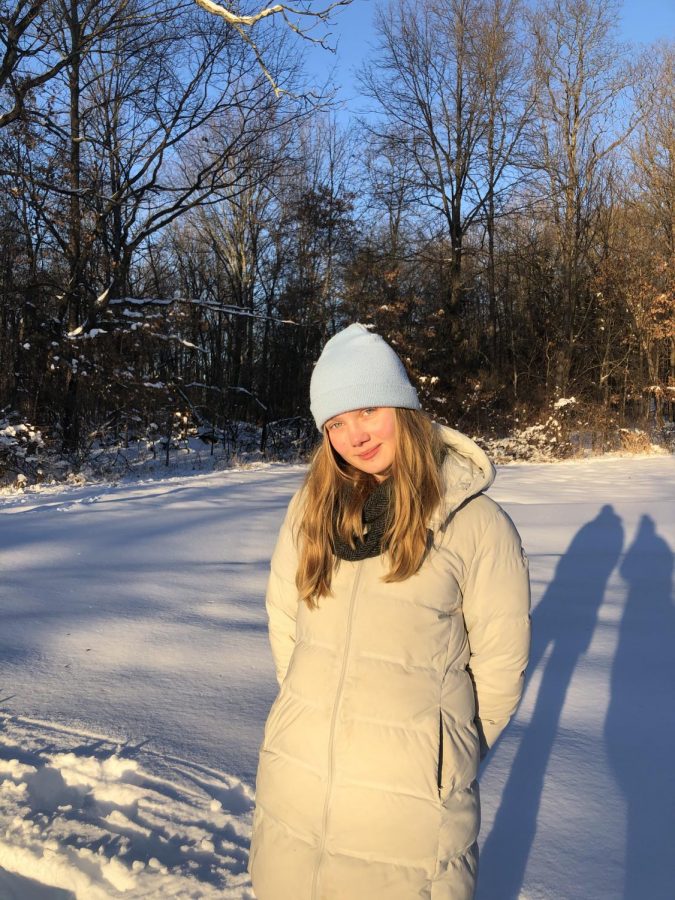 Allie Smithie '22 often takes poetic inspiration from nature, in particular from the British countryside where she spent her childhood.

I will love you when you are calcified, just as I loved you in your youth

For your viscera will remain as soft

As the day of your birth.

While I can’t speak for other readers, I found this excerpt from Allie Smithie ’22’s morbidly fascinating poem, titled “An aging surgeon addressing his dying wife,” to be both intriguing and unexpected. The vivid imagery created by a declaration of love begs the question: What inspired these lines?

As an avid museum visitor, scarf knitter, Upper East Sider, and fan of The Smiths (not to be confused with a fan of Morrissey), Smithie seems to be a completely different character than the  narrator of her poems. Her ability to write from the mind of another creates a pleasantly surprising distinction between creator and subject, although many of her poems do reflect the experiences of a New York City teen. For example, references to the subway system and songs from our shared playlists (a favorite being “Heaven or Las Vegas” by the Cocteau Twins) are reappearing guests in many of her poems.

A train surfaces in the first stanza of “Bird Lipped Truths,” another Smithie poem with striking imagery:

the small shifting swells of bluegreengrey

Maybe you could talk freely?

speak to me truly

Taking the bulk of her inspiration from a motley assortment of her own experiences in the city, philosophical questions posed by men from two-hundred years past, and various religious systems, Smithie attempts to find a balance between imagination and reality.

Smithie began her journey as a self-taught poet in middle school, but her love for language began at an earlier age. As a child, Smithie would fall asleep to her mother reading aloud Edgar Allen Poe’s poems and short stories, and Smithie still regards Poe as one of her favorite poets. His influence provides some context to Smithie’s attraction to dark subject matter, as the two share an interest in the macabre and the exploration of other uncomfortable concepts. Having written her first vignette in seventh grade, Smithie found the activity to be more enjoyable than expected, and went on to indulge in a series of poetic works.

Unfortunately for fans of her poetry, there is not a formula to replicate the Smithie style, but she did share a few of her secrets with me. Although Smithie’s work has gradually moved more toward philosophical and imaginative writing, rather than purely observational pieces, she still uses note-taking as a way of capturing her often fleeting thoughts.

“Sometimes I annotate in the margins of my books, and I have a Google Doc where I write down short snippets that come to me sometimes when I’m outside,” said Smithie.

Focus in any field of interest can influence perspective in unanticipated ways. A scientist may view their surroundings in a scientific light, while a judge may view theirs through the eye of the justice system. In Smithie’s case, her interest in poetry allows her to view each individual, action, and event as a possible line in a stanza. Note-taking allows for the documentation of these lines where mere memory falls short.

In terms of specific language, Smithie sometimes looks to her thesaurus to find the word she believes will have the strongest impact upon a reader.

“I think that gruesome and harsh language can stand out to a reader almost as much as flowery language, and I think that both are pretty hard to accomplish. I try to create a distinct unpleasantness in the reader that stays even after they finish reading my piece,” said Smithie.

A passionate environmentalist and self-proclaimed nature-lover, Smithie translates these subjects into her poetry, evident in the human-made landscape depicted above. The amalgamation of myth and truth continues to appear in Smithie’s personal favorite piece, “the Machinations of our Own Desire,” which she believes to be her best work.

“It’s one of my longer poems, which is more philosophical and relates my own experiences with a greater God — a lot of my poetry is centered around grappling with the idea of religion,” said Smithie.

Smithie’s religious family background led her to develop a special interest in what she states is a “dominating ideology that influences all aspects of society, because of the belief in something we don’t know exists.” This idea of religion as a system of blind faith is a controversial subject and is one that Smithie herself struggles with.

As Smithie writes,”though god never spoke, I felt him in my eye like a small Pebble, which keeps me from sleeping, and maybe if he were in my ear, instead, humming, I would repose, for I am no prophet.” This line from her poem “the Machinations of our Own Desire” reveals an inner turmoil that Smithie faces with regard to the existence of a higher power, and how unanswered questions prevent her mind from attaining the peace she believes would come from the confirmation of a god.

Smithie explores other topics in her poems, many of which are far less macabre than those mentioned above (my personal favorites) and more suitable for the timid. As for the future, Smithie simply responded “Duh” when asked if she plans on continuing her poetic peregrinations. In the meantime, Smithie’s works can be found interspersed throughout Bronx Science  Dynamo lit mags and hidden in her notebooks.
“It’s one of my longer poems, which is more philosophical and relates my own experiences with a greater God — a lot of my poetry is centered around grappling with the idea of religion,” said Allie Smithie ’22.