Aziz 'Hax' Al-Yami '12 is an esports icon, famous for his incredible technical skill at Super Smash Bros. Melee. The 26-year-old has also created and now sells his customized controller, the B0XX, as an alternative for people with sustained hand injuries. 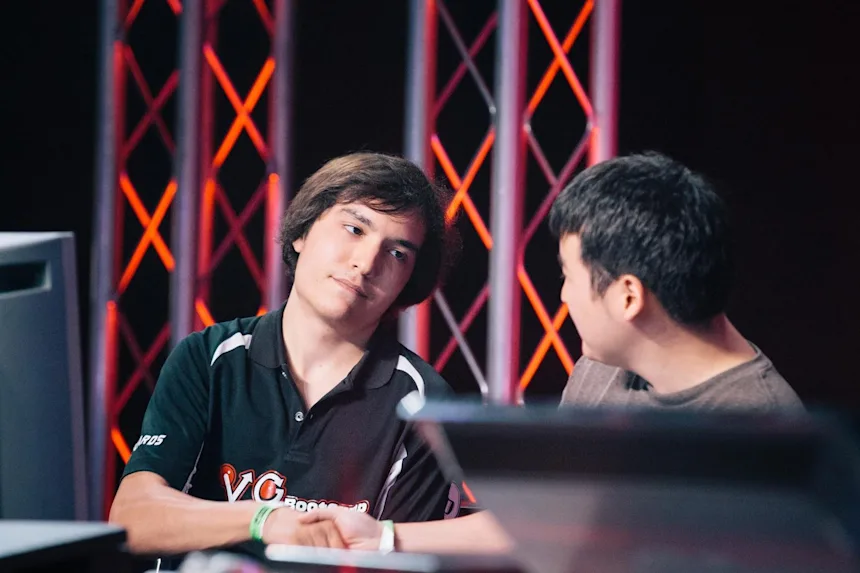 Aziz ‘Hax’ Al-Yami ’12 is an esports icon, famous for his incredible technical skill at Super Smash Bros. Melee. The 26-year-old has also created and now sells his customized controller, the B0XX, as an alternative for people with sustained hand injuries. Even though he has those two full-time jobs, he still finds the time to run tournaments and create in-depth videos about Melee on Youtube.

How did you first get into Smash Bros. and gaming as a whole?

I had [Super Smash Bros. Melee] the day it came out, but before that, I had Super Smash Bros. 64 in the 90s. Back then, it was either you grew up playing the PlayStation 1 or the Nintendo 64. When I grew up going to gaming stores, what would happen was I had a Nintendo 64, but I was four or five years old, so I didn’t understand that like one console couldn’t play games from another console. So I used to buy a bunch of SNES games and they wouldn’t fit into the N64. My parents didn’t understand this stuff either so we had to return them. But yeah, then I got a bunch of N64 games, and Smash was one of my favorites.

So then you got Melee when it came out 2 years later on the GameCube?

Yeah, my friend Mathew and I were just living in our own world, reading this magazine called Nintendo Power, which used to be huge before the internet. Nintendo Power had previews of Melee that we would read together in our homeroom. Then, the game came out two months later, and well… the rest is history.

Let’s talk about that history. The earliest tournament I could find a record for you attending was in 2006, but were you playing competitively earlier?

Yes. The records only show tournaments that had a certain level of prestige at the time, but that tournament was the MLG New York Playoffs 2006. I only got 49th; I wasn’t very good back then. The thing is though, back in 2006, a lot of people didn’t fully understand that Melee had that [competitive] side to it. A lot of people were decent, but there was clearly a higher skill tier that they were not achieving.

Two years after that, you began your four years at Bronx Science. Who were some of your favorite teachers in high school?

Favorite teachers…. there was this guy Mr. Barbour; he was a social studies teacher. The thing I liked about his class was that he forced you to be very articulate in your homework assignments. You would have to read a pretty good amount every night on some topic, and you would have to write a [large] amount just to get a passing grade. At first, no one appreciated that, but eventually, I realized that my writing skills were increasing rapidly because of his class, which was a lasting skill. Being a good writer, it’s pretty invaluable.

Are there any others? Not necessarily just teachers, also staff.

Mr. Kind. He was my guidance counselor, at least during the last few years. And the thing I liked about him was… the thing is I had good grades when I wanted to have good grades, but more often than not, I had bad grades. I’m not recommending you do that; that’s just how it was. So, I would go to Mr. Kind, and he was kind of the only guy I could confide in and tell about my pro-gaming secret life.

So did people know about your esports career?

See, it was a secret life back then, which I regret. I mean people knew, but I wasn’t going around telling the world ‘yeah, I’m a pro gamer, that’s what I do.’ It was like if you found out you found out. I really regret that because… one thing that becomes super obvious as you get older is that you gotta be who you are. It’s the only way to go about things in life, but back then, I was still pretty insecure.

A decade ago, making a living off playing video games was considered a very unusual concept. Was your family supportive of that decision?

Yeah, they were. I’m really lucky that my parents were okay with that. I think their mindset was that the interest in more schooling just wasn’t there, whereas I was really, really good at this game I was competing in. I also emphasized that you can make a decent living playing this game, so I guess they thought, ‘why not let him ride it out for as long as possible?’ I’m definitely happy I did that. I wouldn’t have wanted to go down a road I wasn’t interested in.

Hax’s career as a professional gamer skyrocketed after high school. He was consistently ranked as one of the top ten Melee players in the world, reaching a career-high of #6 in 2013. However, just as everything was looking up for him, tragedy struck. In May of 2014, Al-Yami felt what he described as “an explosion” in his wrist while playing Melee. This was the first of many hand issues caused by the fast, repetitive movements and the unergonomic design of GameCube controllers.

From 2015 to 2017, you were unable to play Melee competitively due to your hand injuries. Did you ever consider giving up?

“No, I never did. That was why I embarked on this multi-year project to create this new controller. It took a ridiculous amount of motivation, that’s for sure, but you see, when that all happened to me, I was at a big turning point in my career. I had just switched to Fox [widely considered the best character in Super Smash Bros. Melee], and I knew this was going to be the next chapter. I thought I only needed, like, one more year and I could have been the best, so when my hands broke, I said to myself, ‘no, I’ve gotta come back from this.’”

So that’s when the B0XX came in. What was it like trying to create this new controller?

“At first, it was looking very bleak. A big part of [the issue] was if it was even viable to do. The thing is, at first, I couldn’t even fully devote myself to practicing on the B0XX. I had to design it, which took a long time, and then I had to get it legalized for tournament use, which was a huge undertaking. I couldn’t practice as much as I wanted to until 2019, which was already two years into the process.”

Once you were able to devote that time though, what was the learning process like?

“Even as a former pro of the game on a GameCube controller, when you start to relearn on the B0XX, the most basic things become hard again. Just walking instead of dashing is weird, and I didn’t even fully learn how to angle my up special for 6 months. It’s all because instead of just pointing a stick, you have to memorize button combinations. With that being said, I made it as intuitive as possible, but it’s still way less intuitive than just moving an analog stick around.”

If tomorrow, your hands were magically fixed, would you play with the GameCube controller again or stick with the B0XX?

So during that hiatus where you were designing and adjusting to the B0XX, you played League of Legends and reached the top 200 in the world?

“Yeah, I was the best with Twisted Fate; they were the character I played in that game. I was a one-trick pony, meaning I literally didn’t know how to play any other characters.”

Are there games other than those two that you’ve played competitively?

“No, not really. Over the past seven or eight years, it’s really only been those two. I play games to compete, and I want to be good, so I can’t spread myself too thin. I mean, ultimately, the reason why I quit League was because I felt that I had to to be the best at Melee.”

What do you mean by that?

“To be number one at something, you generally don’t try to be super good at anything else. When you get to the top level of competition [in Melee], like the top 10 in the world, it becomes super difficult to jump even one rank up. There are legitimate skill gaps between ranks 5 to 4 or 2 to 1. It’s not like when you’re back down in the top 100 or top 50. You could easily jump up 10, maybe 20 ranks in a month down there.”

“Yeah. Because all the people you’re competing with at that point are playing the game for a living. They’re practicing 4-10 hours every day so that they can be the best. At that point, playing other games is hard. I always think about playing League again though. I never streamed it on Twitch, which I feel was a pretty big missed opportunity. I mean even now, you had to ask me if this actually happened; you’re not even sure.”

So, in 2013, you created the meme that was ‘20XX,’ or the idea that in the far future when Melee has been perfected, everyone will play Fox. Do you still stand by that idea?

“Well, here’s the interesting thing – that’s not really what 20XX is about. There are levels to this. Like yes, I think Fox is the best character in the game without a doubt, but 20XX is more of a mindset. In Melee, a lot of players will evaluate things based on their risk/reward ratio, but the 20XX mentality is that you should [put in] insane amounts of hours so that you can attempt the hardest things in the game. You should be viewing it from the perspective that if you can hit multiple, frame-perfect sequences in a row, you could theoretically nail the best option in the game. It’s gonna be hard, and you’re going to have to [work and work] and fail and fail and fail, but you’ll eventually get there. And yes, you have to accept that you’re a human being, so you can’t be perfect all of the time, but you have to go for it. Don’t strive to be great, strive to be perfect, and you’ll end up being the greatest.”

Al-Yami’s pursuit of perfection appears to finally be paying off. In late 2019, he placed 3rd at Mango’s Birthday Bash, where he defeated Juan ‘Hungrybox’ Debiedma, the #1 player in the world at the time. Add that to his 4th place finish at Genesis 7–a tournament with over 2,500 entrants–and his consistently high placings throughout 2020, it’s clear that Hax is back, and he’s here to stay.
“I play games to compete, and I want to be good, so I can’t spread myself too thin. I mean, ultimately, the reason why I quit League was because I felt that I had to to be the best at Melee,” said Aziz ‘Hax’ Al-Yami ’12.