Dr. Marcella Nunez-Smith: A Catalyst in the Healthcare Reform Movement

Appointed as the head of the Biden Administration’s new health-equity task force, Yale physician and public health researcher Dr. Marcella Nunez-Smith is determined to use her platform to address the racial and socioeconomic disparities ingrained in today’s healthcare system. 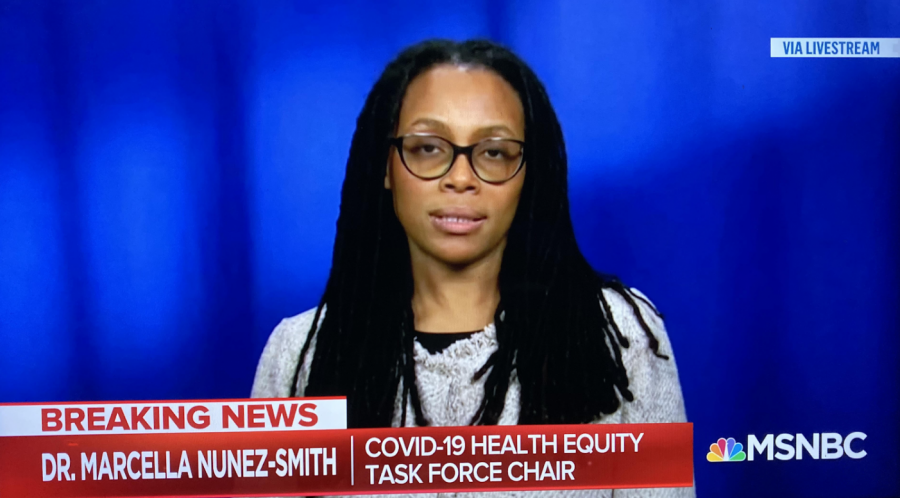 Dr. Marcella Nunez-Smith ensures the public that the Biden Administration is focused on carrying out an equitable Coronavirus pandemic response and recovery efforts, as well as protecting the safety and health of all communities — especially those most affected by or at risk for COVID-19.

Last May 2020, a study published in the Journal of General Internal Medicine discovered that African-Americans were over three times more likely to die from COVID-19 than Caucasian Americans. That same study also found that the COVID-19 death rate for the Latinx population was about two times higher than that of Caucasian Americans.

Many other studies have resulted in similar findings. One that was published last September 2020 revealed that Black patients were 5.4 times more at risk than those of other races to test positive for COVID-19. Another study reported that of 5,902 COVID-19 patients that resided at a medical center located in the Bronx from March to April 2020, a majority identified as either Hispanic (32.3%) or Black (32.8%).

With such alarming statistics, it goes without saying that the Coronavirus pandemic has unmasked one of the most detrimental flaws in healthcare: structural racism. Though these racial disparities have just recently begun to see the light, they have been rooted deep within the system for decades. For instance, a study conducted in 2019 estimated that African-Americans are three to four times more likely to die during pregnancy. In 2014, another study found that Black patients are ten percent less likely to be admitted into a hospital while having a death rate in that hospital about 1.5 times greater than that of Caucasian patients. And prior to that, a 2012 study discovered, through the analysis of zip codes, that predominantly Black communities are 67% more likely to have a shortage of primary care physicians. With these reports as well as the countless others corroborating that minorities are disproportionately affected by morbidity and mortality from chronic diseases including cancer, heart disease, diabetes, and stroke, there is more than enough evidence demonstrating that the healthcare system is in need of much revision.

Hopefully, with the appointment of Dr. Marcella Nunez-Smith – our nation’s first ever health-disparities advisor – we will see real change occur in the upcoming four years.

Late last year, Dr. Nunez-Smith, Yale physician and public health researcher, was elected as the head of the Biden Administration’s health equity task force. With the pandemic shedding light on the alarming healthcare disparities predominantly faced by communities of color in the United States, Dr. Nunez-Smith’s appointment as chair of this initiative indicates Biden and his administration’s intentions of addressing and combating the inequities within today’s very-fragmented healthcare system.

“I am really deeply honored to have the opportunity to serve the president-elect and VP-elect in this way,” Nunez-Smith told Vogue, “I have been working on COVID-19 issues from the beginning of the pandemic, particularly the way that the virus has disproportionately impacted certain communities.”

As the leader of the health equity task force, Dr. Nunez-Smith plans to address the racial and ethnic disparities in healthcare by allocating more medical resources and relief funds to vulnerable and marginalized communities. In addition to collecting accurate, high-quality data pertaining to race and ethnicity and empowering people of color to take on more leadership positions in healthcare and beyond, she also intends on addressing socioeconomic inequalities that put these communities at greater risk for disease and death.

“It is true that we continue to see mortality rates two times higher among communities of color, particularly among Black Americans. In Black communities, 50% of people know someone who has died. There has been a gap in grief and suffering and disproportionate economic impact. But it’s important for people to understand that these realities are the effects of systemic policies and intergenerational denial of access to resources. That’s what is driving the disparities we see now,” Nunez-Smith said.

“Making sure communities hardest hit by the pandemic have access to safe, effective vaccines remains a priority. What’s needed to ensure equity in the recovery is not limited to health and health care. We have to have conversations about housing stability and food security and educational equity, and pathways to economic opportunities and promise.”

Having grown up in St. Thomas, an island in the United States Virgin Islands, Dr. Nunez-Smith knows all too well the repercussions of a shortage in adequate healthcare and medical resources on minority populations. Her unwavering ambition to combat the health disparities faced by marginalized communities was inspired by her father, Moleto “Bishop” Smith Sr., who, during his 40s, suffered a severe stroke that left him partially paralyzed and with slurred speech. The stroke turned out to be caused by hypertension, and had it been diagnosed beforehand, it could have been easily prevented and treated. Without this early diagnosis, her father never fully recovered.

“He was a champion and a fighter,” Nunez-Smith told The New York Times, “But my memories are of a father who had to live life with this daily reminder of how we had failed in terms of our health care. I don’t want another little girl out there to have her father suffer a stroke that is debilitating and life-altering in that way.”

The influences of her mother, a retired nursing professor, as well as her godfather, a surgeon in St. Thomas, also contributed to Dr. Nunez-Smith’s early interest in medicine. “[My mother] said I could read anything I could reach. I started early on learning medicine and nursing texts, and became fascinated with the human body and biology.”

Dr. Nunez-Smith went on to attend Swarthmore College in Pennsylvania, where she double-majored in biological anthropology and psychology before pursuing a medical degree at Jefferson Medical College (which has since been renamed to the Sidney Kimmel Medical College). She later completed her residency training at Harvard’s Brigham and Women’s Hospital as well as a fellowship at the Robert Wood Johnson Foundation Clinical Scholars Program, where she earned a master’s degree in health sciences.

In addition to being a distinguished physician, researcher, and professor, Dr. Nunez-Smith serves as the director and founder of Yale’s Equity Research and Innovation Center as well as Yale’s first-ever associate dean for health equity research. She is also the head of a five-year collaborative research project funded by the National Institutes of Health to study chronic disease, specifically heart disease and diabetes, in the Caribbean Islands – namely Puerto Rico, Trinidad and Tobago, Barbados, and the United States Virgin Islands. On top of that, she dedicates her efforts to various community outreach initiatives including the Community Foundation for Greater New Haven and Connecticut Voices for Children.

Dr. Nunez-Smith has conducted numerous studies on the health inequities faced by minorities as well as the institutional racism faced by physicians of color. One of these studies, for instance, focused on the attitudes that Black patients have towards medical personnel, from which she discovered that many lack a sense of security and trust in the healthcare system. Much of her research is based off of her own experiences as a Black female physician. For instance, she reports that despite presenting herself as a doctor, many patients automatically assume and treat her as if she were a nurse or janitor whose responsibilities are to empty the trash or fetch the meal tray.

In a poll conducted by the Equity and Research Innovation Center and the The National Association for the Advancement of Colored People (N.A.A.C.P.) in which 604 African-Americans were surveyed, Nunez-Smith found that over half believed that Black people are less likely to have access to Coronavirus tests than Caucasian people during testing shortages, that they have a lower chance of getting admitted into hospitals when needed, and that Black patients are less likely to “have everything done to save their lives.”

“Medicine as a profession has been really silent on issues of race and discrimination for a long time, and that normalized things like patient mistreatment of providers or different patients getting treated differently,” Nunez-Smith said in Vogue.

“People of color in hospitals and practices are often invisible and must deal with climate and culture issues all the time. For example, patients might refuse to accept that a person of color is a physician, even with data they have — like seeing a stethoscope.”

The poll also discovered that amid the pandemic, more than one-third of those surveyed had lost a job or had their hours reduced. About one-third reported that they didn’t have enough money to afford groceries or pay rent. “Economic pressures keep them going to work even when they fall ill,” said Nunez-Smith.

While Dr. Nunez-Smith does agree that more medical resources and relief funds should be provided for vulnerable communities, she also argues against singling out communities of color and suggesting that underrepresented or underprivileged groups should be given priority vaccine access. “People of color all hold the memories of experimentation that are not all so distant. It didn’t just start with Tuskegee or Henrietta Lacks. So you can really understand if there are communities that are wary to be called out in a way that …. [feels] like another way of continuing experimentation,” she said.

“We have to think about what the concerns are about the vaccine and make sure people can see those concerns reflected back to them. Yes, the level of skepticism is higher among Black Americans. And if the concern is about historical mistreatment, the message needs to be about research and safety.”

According to a spokesperson for the Biden Administration, Dr. Nunez-Smith will assist in orchestrating the pandemic response efforts carried out by health care agencies and the federal government – including the Departments of Health and Human Services, Veterans Affairs, Labor, Housing and Urban Development, Homeland Security, State, and Defense.

Furthermore, Dr. Nunez-Smith will also work to empower the voices of marginalized groups by serving as a liaison between the Biden administration and communities of color. This position is crucial in urging all Americans to get the COVID-19 vaccines, especially Black communities given their lack of trust in the public healthcare system due to past mistreatments and ethical violations.

Despite being amidst such troubling times and unprecedented circumstances, Nunez-Smith remains optimistic for the future. As a mother of three, she hopes that her children will grow up to live in a society where individuals are provided with equal opportunities and resources regardless of their socioeconomic status or the color of their skin.

“Where I find hope and optimism is that we know a lot more now about how to treat COVID 19, and the vaccine is on the horizon. We also know the public health measures that work: tight social bubbles, using a face covering. I also find some optimism in the national reckoning we’re having around race and racism, and [the idea] that so many are now thinking about equity in the work that they’re doing. Those are moments where there can be light and hope.”
“Making sure communities hardest hit by the pandemic have access to safe, effective vaccines remains a priority. What’s needed to ensure equity in the recovery is not limited to health and health care. We have to have conversations about housing stability and food security and educational equity, and pathways to economic opportunities and promise,” said Yale physician, professor, and public healthcare researcher Dr. Marcella Nunez-Smith.