Who is: Alex Trebek

A celebration of the famed longstanding host of Jeopardy! 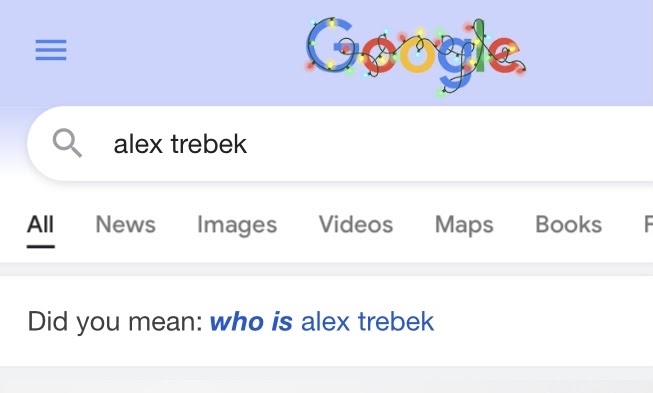 Google honors Trebek by prompting “Who is: Alex Trebek," a nod to Jeopardy’s tradition of giving answers in the style of a question.

November 8th, 2020 was a sad day for Jeopardy! fans. The year 2020 brought yet another devastating event — the passing of Alex Trebek, longstanding Jeopardy! host and TV personality. He was 80 years old and had been fighting pancreatic cancer for a year and a half. “Alex Trebek brought a warmth to his role as host, and it will be missed,” said Lucy Del Deo ’21.

Trebek became an iconic symbol of Jeopardy!’s longevity, but his childhood did not indicate such a special future. Born in Sudbury, Canada to Ukrainian immigrants, Trebek’s early life was full of turmoil. His family was poor, his father drank excessively, and Trebek developed rheumatism. However, when he reflected on his early years, his positive outlook prevailed. He wrote in his memoir, “I don’t have a lot of ghosts. I don’t have any bad memories that affect my life. It’s all good.”

When Trebek went public with his battle with cancer, he assured his fans that he would continue to host as long as his skills were not affected. He remained positive, choosing to see the overwhelming good in his life rather than this single obstacle. “One thing they’re not going to say at my funeral as part of a eulogy: ‘He was taken from us too soon,’” Trebek said. “I’m 79 years old. I have lived a good life, a full life, and I’m nearing the end of that life. I know that. I’m not going to delude myself.”

He had reason to be so proud – he was a philanthropist with many achievements. His charitable work spanned various issues personal to him such as pancreatic cancer, film, and geography. By the end of his career he had won the Daytime Emmy Award seven times, and the lifetime achievement award. The Royal Canadian Geographic Society named him Honorary President, and renamed a prestigious geographic literacy award after him. Wherever Trebek went, his curiosity and dedication touched and inspired everyone around him.

Trebek studied philosophy at the University of Ottowa and tried a career in journalism before entering the T.V. scene. He hosted game shows like The Wizard of Odds, High Rollers, $128,000 question, and Pitfall, before becoming the host of Jeopardy! in 1984, where he would build his legacy as a host for 37 seasons. Trebek enjoyed Jeopardy! because it celebrated intellect, and he was always in search of knowledge. Fans loved his practical yet friendly demeanor.

Trebek believed his success came from his ability to bring comfort and familiarity to the audience, instead of impressing them. He took pride in his work and in his talented contestants, but he was timid in giving himself credit. Fortunately, fans everywhere were always quick to shower him with support and love. On one Jeopardy! episode after Trebek revealed his cancer diagnosis, a contestant sacrificed his Final Jeopardy answer to write, “We (heart) you Alex!” leaving the contestant with just five dollars. The contestant later tweeted, “We were all hurting for him so badly.” #WeLoveYouAlex became a trending hashtag full of fans expressing their appreciation for the wholesome host. Trebek’s legacy and fame penetrated other aspects of pop culture – shows like Family Guy, The Simpsons, and Saturday Night Live, all had a character at some point inspired by Alex Trebek.

But Trebek’s humility and reservedness led him to step out of the spotlight. He resisted writing an autobiography until his cancer diagnosis. He felt his fans deserved it after he received overwhelming love from them. He released his memoir The answer is…: Reflections on my Life in July 2020. The book is chock full of dad jokes, humble reflections, and his lifelong commitment to learning.

Trebek’s passing has introduced the question of possible replacement hosts on Jeopardy!. There will be series of guest hosts until they find a permanent replacement. Ken Jennings, who holds the title of Winningest Jeopardy! contestant and winner of the Greatest of All Time competition, will be the first interim host. Other speculated hosts are George Stephanapolous, Betty White, Alex Faust, and Laura Coates.

Trebek’s death is devastating, but his legacy will be long lasting. He concluded his memoir by writing, “My life has been a quest for knowledge and understanding, and I’m nowhere near having achieved that. And it doesn’t bother me in the least.” In the name of Mr. Trebek, may we all continue in our own quests for knowledge.
“Alex Trebek brought a warmth to his role as host, and it will be missed,” said Lucy Del Deo ’21.