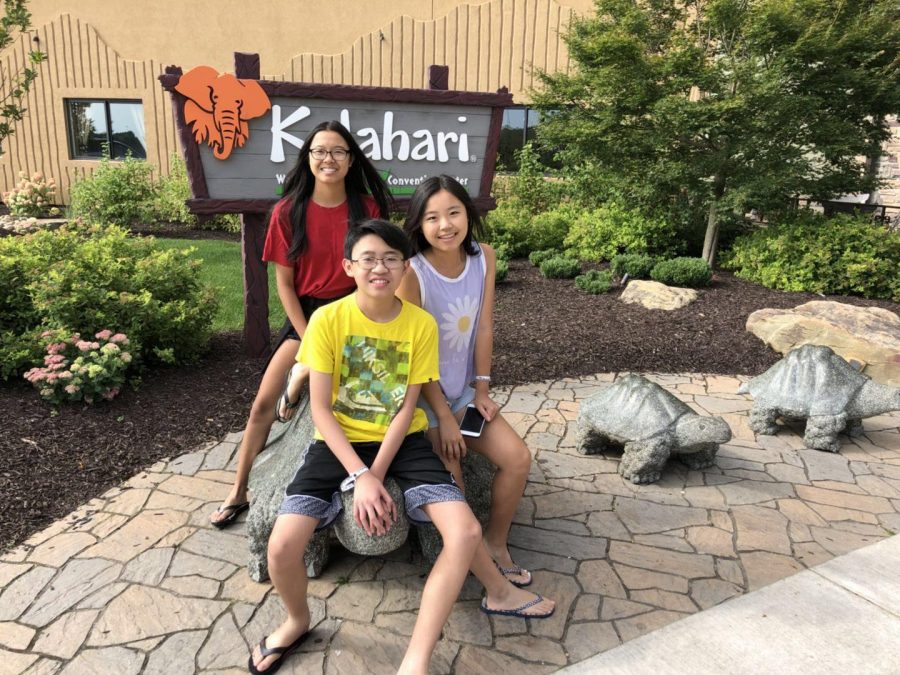 Sitting on a turtle in front of a conservation center, Joy, Eddy, and Julie Lin sit on a turtle on a family outing together.

A child’s first playmate is the longest friendship they’ll ever have. The playmate will teach them new skills and expose them to many of their interests and tastes. They’re siblings and despite their differences, they probably understand each other better than anyone else.

National Siblings Day is on April 10th each year. On this day, siblings enjoy time with each other and celebrate being in each other’s life. Many Bronx Science students have brothers or sisters that are within the school or have graduated in recent years. These unique relationships help strengthen the bond between them.

Joy ’19, Julie ’21, and Eddy ’22 Lin certainly know this. “Being in the same high school has definitely given us similar experiences that we can relate to and has given me an opportunity to help my brother and get advice from my sister,” said Julie Lin. This relationship has particularly been useful with Spanish courses as they give each other tips on how to best complete the homework assignments.

Being at Bronx Science together has further improved their relationship because they can see each other more often than before. “Bronx Science is so far from our home that if we didn’t see each other at school, we would barely see each other on top of our extracurriculars,” said Julie Lin, who is very involved in cross country and track.

Jack ’19 and Ben ’20 Nicastro share a similar bond, enjoying all the time that they get to spend with each other. “We struggle together through our grueling ninety minute commute from Brooklyn, take some of the same classes (such as orchestra, AP Spanish Language and Spanish Film and Narrative) and handle similarly burdensome workloads,” said Jack Nicastro. They make quite the team, backing up each other’s arguments last year in Ms. Patricia Núñez’s AP Spanish Language class. When discussing the various debate topics, they would “inevitably end up dissenting to the popular opinion and would bounce our arguments off each other to substantiate our points and refute the others’ arguments,” said Jack Nicastro.
“Being in the same high school has definitely given us similar experiences that we can relate to and has given me an opportunity to help my brother and get advice from my sister,” said Julie Lin ’21.
Outside of the classroom, the two lead the school’s World Languages literary magazine, Vox Discipulorum, exercise, and discuss movies together in their free time. The brothers love to spend time together, always cracking each other up. “I appreciate having Ben at Bronx Science with me because it provides us yet another shared experience with which to strengthen our brotherhood” said Jack Nicastro.

Another sibling friendship within the walls of this school is between Kevin ’17 and Megan ’19 Ngo. The two share similar interests and activities, as both enjoy playing the guitar and piano. They are very close, ready to help one another in times of need and to provide comedic relief. Recalling one of her most memorable moments with her brother, Megan referred to a time when she almost drowned in the ocean. “My brother was next to me so he swam to save me, and then I pushed him down in order to breathe,” said Megan Ngo. Though Kevin Ngo jokes that he will never save her again, the pair knows that they can always count on each other.

While the Nicastro brothers participate in the same two activities in school, when Megan Ngo was accepted, she was motivated to create an identity for herself separate from that of her brother. This kept her from joining robotics in her first year, but later she decided participating in similar in-school activities would be a fun way to get closer to her brother. Now, after joining the FeMaidens in her sophomore year, she is one of the Heads of Engineering. “I really wanted to do something different, that was more humanitarian based, and that’s probably why I was so drawn to Key Club,” said Megan Ngo. She has been very influential in the club, acting as Scrapbook Committee Co-Head, Treasurer, and President in her sophomore, junior, and senior years respectively.
Despite the occasional issues that all siblings inevitably face, she still loves him very much, enjoying every moment that they can play Guitar Hero, their favorite game. “We still use the ten year old Wii in our house to beat the last high score on ‘Living On a Prayer,’” said Megan Ngo.

This National Siblings Day, everyone should let their siblings know they are appreciated, whether they are in Bronx Science or not. Life is a lot better when siblings have each other to depend on and spend time together.