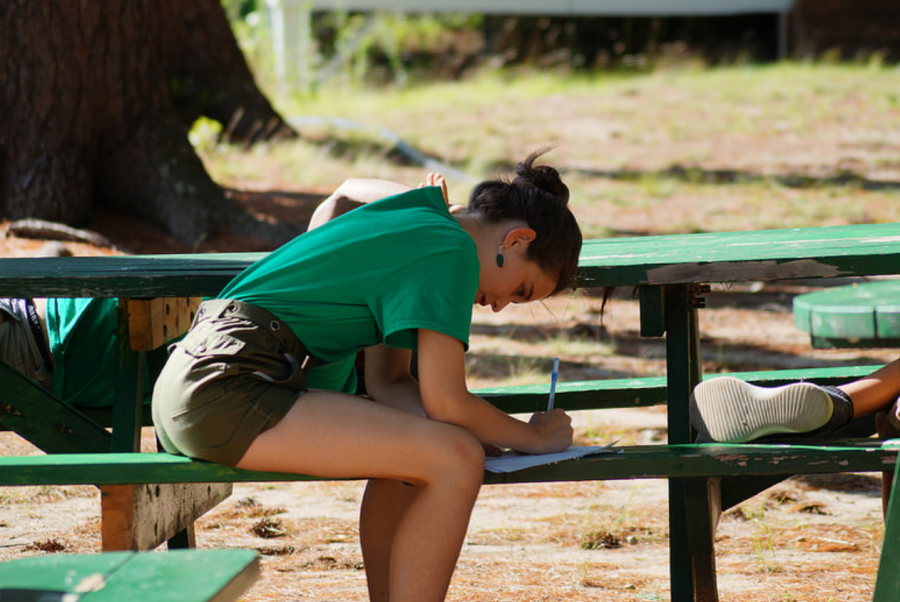 Impromptu dance parties in the small hall, color games, and two-hour dialogue sessions about facing conflict were all typical aspects of camp. Last summer, Edie Fine ’21 spent her time in a campsite in Maine. She attributes her personal growth to the meaningful experiences that she has had in Seeds of Peace.

Seeds of Peace, founded by author and journalist John Wallach, inspires new generations of global leaders in communities divided by political and religious conflict. With over seven thousand alumni, the Seeds of Peace network spans multiple parts of the globe, including the Middle East, South Asia, Europe, and the United States. Using a selective application process, Seeds of Peace equips qualified youth and educators with the the necessary skills to surge social, political, and economic changes.
“Seeds encouraged me to figure out who I am in the context of figuring out the world.”
For Fine, the day to day activities were always interesting and there were a wide array of ‘special activities’ to choose from. Every morning, campers, called ‘Seeds’, woke up at 7:00 a.m. and went to lineup by 7:30 a.m. During lineup, the campers sat on benches overlooking Pleasant Lake while Sarah Brajtbord, the camp director, wished them a good morning and gave them a rundown of the day. Then, they went to breakfast, where a quirky Seeds tradition called “table dating” would occur. Although it may seem minor or perhaps even silly at first, these traditions allowed campers to get closer to their peers through a fun, engaging activity.

“For table dating, we wrote and performed chants that were meant to ‘woo’ the other tables. My table, table 8, married table 9. The proposal was very elaborate,” Fine said.
After the daily morning routine, campers broke out into the special activities of their choice. The special activities are designed to stimulate discussions about important ideas and issues. Fine’s first special activity was based on the premise of discussing Kanye West. “I am not a Kanye fan, but I knew I wanted to be a part of this group, which served to open a dialogue about Kanye, and other ultra-famous musicians that are controversial figures,” Fine said.

During this special activity, the main conversation slowly evolved into one about the separation of art versus artist, and about how some may decide to appreciate an artist’s art, despite not liking the artist; and whether it is possible to separate the character of the art from the art itself.

Other special activities pertained to a wide range of topics such as philosophy and conspiracy theories. There were also more out-of-the-ordinary special activities as well, including one called “Being Weird,” in which campers were free to act as weirdly as they possibly could. During this activity, a few seeds came up with a song about hot dogs and Pepto Bismol.

Edie Fine’s personal experiences with the camp have greatly contributed to her character today. “Seeds encouraged me to figure out who I am in the context of figuring out the world,” said Fine. A truly memorable moment for Fine was when Sarah Brajtbord sent the campers off from their morning lineups with words of wisdom to face the day with. The words of wisdom went as follows: “Conflict is not a negative thing; nor is it positive. Aim to see conflict as existing between the two: a neutral force. Conflict is inevitable, and we should stop treating it like it is something to avoid.” These words stuck with Fine, as she often recites them to herself. For Fine, Seeds is a place where young people become advocates through learning to love and listen.

Seeds of Peace camp serves as the perfect summer opportunity for students who are passionate about civic engagement and wish to cultivate peace. Although ideal candidates to become a seed are between the ages of fourteen and sixteen, those who are above this range are encouraged to get involved in other ways. Applications can be found on their website for different delegations. They have delegations in New York, Los Angeles, Chicago, Maine, Syracuse, the United Kingdom, India, Pakistan, Egypt, Israel, Jordan, and Palestine.

All in all, Seeds of Peace is a truly transformative experience. Fine is grateful for having the opportunity to be a part of the program last summer and highly suggests ninth and tenth graders apply.