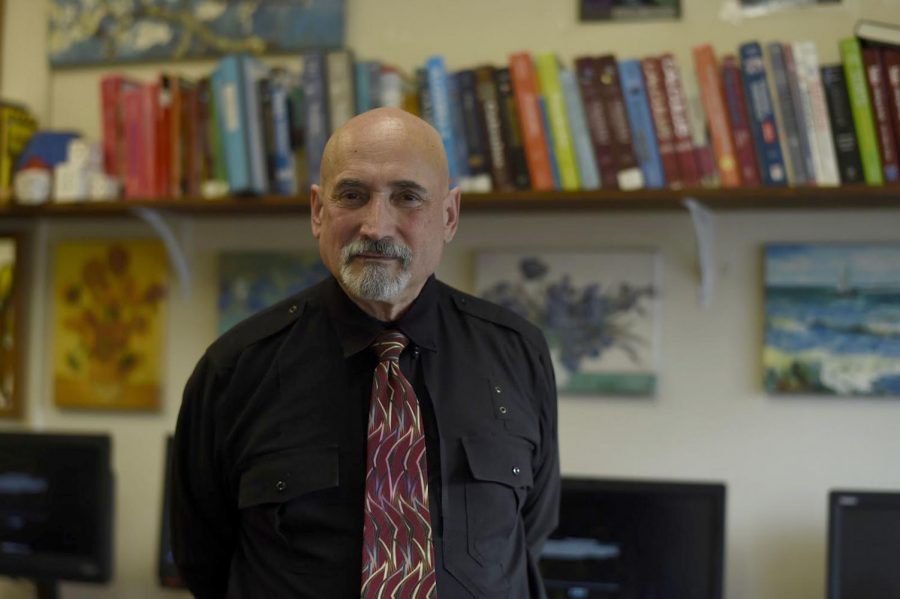 Mr. Rainford in the math office, wearing one of his many dazzling ties.

Mr. Michael Rainford. You may see him everyday walking down the halls, but what do you really know about him? After interviewing a couple students, many mentioned, without any prompting, his tie collection. “[We] often engage in short exchanges, usually me complimenting his stylish ties,” Baboucarr Gaye ’20 said.

However, while many could cite his noticeable ties, far fewer could actually cite his role in the school. “I understand he used to be the shop teacher and is now a dean, however I’m not sure what he’s responsible for beyond that,” Gaye said. Most students offered pretty similar responses. The overall consensus from students was that he largely just patrolled the building.
“I always noticed his fun cowboy hats and ties,” said Tahira Hasan ’19

In reality, Mr. Rainford has a much larger role at the school than most students realize. He is currently the cafeteria warden and technology teacher. Originally, he taught a class known as “Chemical Photography,” after learning the craft from his great uncle in high school, Percy Rainford, a Jamaican-born American surrealist photographer who worked with Marcel Duchamp and Peggy Guggenheim. In Rainford’s class, students explored the darkroom and created portfolios while learning the chemistry behind their photographs. However, to truly understand Mr. Rainford, we have to look beyond just his work. As many students noticed, he has a vast tie collection that can give us some insight into his character.

“I just counted over 250 I had in two rooms, not including those I wore last year,” said Mr. Rainford. He accumulated this many because over the years he would buy any tie that he liked as soon as he saw it. Most of his ties were collected during his time as a teacher at Bronx Science. At his past jobs, there was less of a necessity for put-together, professional attire. When he came to Bronx Science, Mr. Rainford felt he had to demonstrate the same values that the school represented for him. “To me, my ties are an homage to a profession I’ve dedicated the last 22 years to. It’s a sign of acknowledgement of academic professionalism,” he said. His diverse ties give you insight into his diverse interests and values as well as allow you to learn more about him as a person.

Though he does not have a favorite tie from his collection, he does have some special memories from specific ones. Out of his years of sporting many eye-catching ties, Mr. Rainford most notably recalls his encounter with famous jazz guitarist John Pizzarelli. “Pizzarelli pointed it out to one of his band members who knew the designer personally. It was a signature tie in his band,” Mr. Rainford said.

While it’s great that many students know his unique ties, it is important to acknowledge the extent of Mr. Rainford’s role in the school. His long-standing work should not go unappreciated and hopefully more students will be inspired to start a conversation to find out a bit more about him – and his ties – as he walks through the halls.