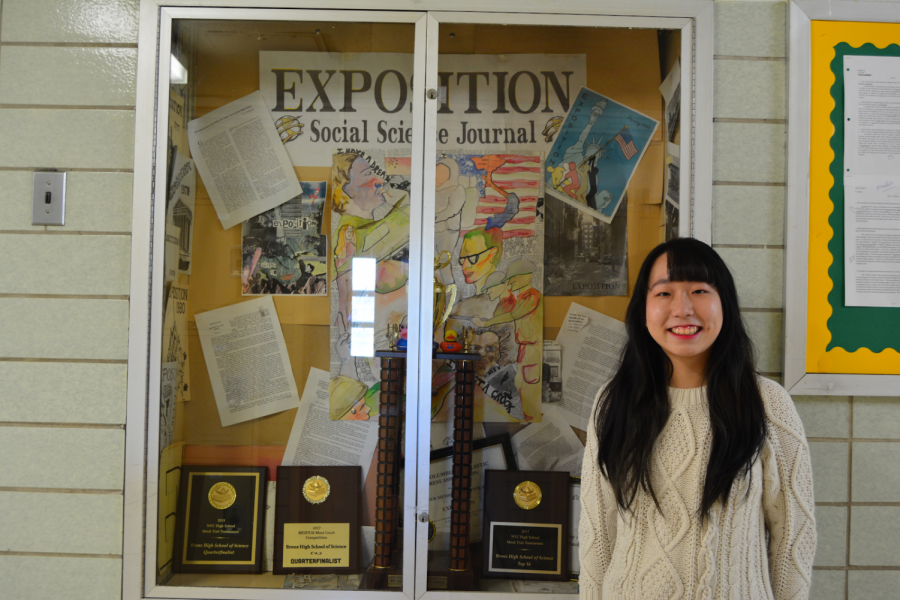 Mian Hua Zheng ’19 stands next to Exposition’s previous publications, hoping to improve the quality of this year’s journal.

The bell rings and SGI is now over. For many students, the best part of the school day has just begun. Bronx Science has various types of clubs, but not all of them get the same amount of attention. Publications especially could use a boost in student recognition. Two of these underappreciated publications include Exposition and Vox Discipulorum.

‘Exposition’ is the school’s social studies magazine. It has existed in the school since the 1970s, with membership waxing and waning over time. In the club, students are able to not only express themselves politically, but also artistically. “Students design the entire publication, from the layout and design to the content itself. It’s also a place where we hold discussions about current events happening nationwide and globally freely,” said co-president of ‘Exposition,’ Mian Hua Zheng ’19.

Zheng encourages students interested in design, writing, history, and current events attend a meeting. If interested, students should go to room 303 after SGI on Wednesdays. Even if a student is not the biggest history fan, ‘Exposition’ allows engaged students to learn more about the political climate.

For students interested in reading previous publications, Zheng says they “can be seen in the glass plaque in the history wing!” The publications displayed include the earliest ones from 1979, as well as the ones from recent years. Zheng, along with the rest of ‘Exposition,’ hopes to produce more than one publication this school year. This, however, can only happen if more students join.

Another option for students who want to participate in one of the school’s literary magazines is to join ‘Vox Discipulorum,’ the school’s World Language magazine. In the past, Vox was a thriving magazine, but over time it had to disband as not enough students knew about it. However, Faculty Advisor Ms. Maria Olmedo was determined to bring it back, and she has finally accomplished her goal this year.