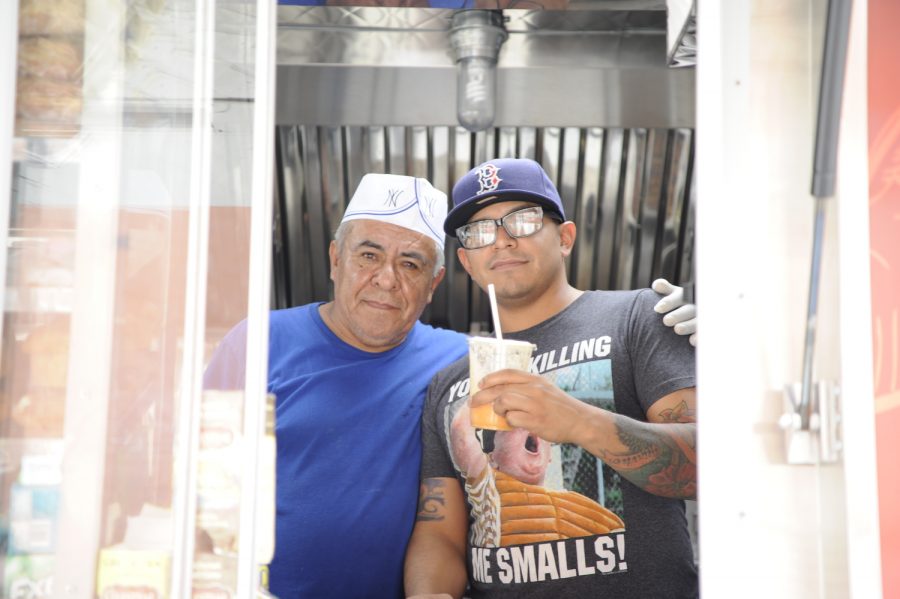 Pictured above, Jay and his father pose in their new truck. “It’s a family business,” he said.

It’s a sight Bronx Science students know too well; the lunch bell rings and large crowds of hungry teenagers gather to shout their orders to food trucks. To an exhausted student who has not been in direct sunlight since first period, going to Ned’s or Jay’s during lunch can be the highlight of their day, both located on the edge of our campus. However, there are only so many students to feed, which begs the question: how do these trucks compete?

Jay’s food truck, a staple of Bronx Science cuisine since 2009, has upgraded its menu and design frequently to cater to students’ culinary demands. Jay’s new truck, ‘El Gran Campeón,’ stands many heads taller than its predecessor with almost twice the floor space. The new upgrade has allowed Jay to expand his menu to include nachos, smoothies, soups, and more. “The biggest influence in the redesign was the students,” Jay said. “I knew that students wanted more healthy items, and the new space allows for much more variety.”

Ned’s, another Bronx Science favorite, seems to have taken steps to match Jay’s growing esteem. Ned, who has been serving Bronx Science students since 2004, recently introduced a second truck to his business across the street from Jay’s.

“I’ve always had two trucks,” Ned said. “You bid for the spots, and this year I got this one too.” The new truck has allowed him to devote more resources serving students his signature fries and sandwiches, which he says is the most rewarding part of his job. “It makes me feel young again,” he said.
“We serve from the heart,” he said. “We treat everybody like family.”
Ned has also introduced halal chicken to his menu and decreased the price of his egg sandwiches from $3 to $2.

“Why not?” he responded, when asked about the price decrease. “It’s not all about taking; you gotta give back,” he added.

With such rapid price decreases and menu improvements, it seems as though there may be a competitive side to the food trucks. Like many students, Andi Kodra ’19 sees the constant upgrades as a sign of this competition. “I think they’re trying to stay even with the amount of business they get,” he commented.

However, neither Jay or Ned admit to feeling intimidated by their neighbor. They even seem friendly with one another.

Jay never found it difficult to attract customers to his truck. “Back in high school, I used to wait tables. A couple years in college. You learn how to talk to people,” he said, crediting his signature friendliness to his time as a waiter. “It’s easy for me to talk to students.”

Jay made little comment on his relationship with Ned and the other food truck operators. “I met Ned on my first day here,” he said. “I’ve heard of Michelle, but I’ve never talked to her.”
Due to scheduling conflicts Michelle was not available for comment.

Ned sees the friendly rivalry as being more exciting than destructive. “I welcome the competition; they serve their thing and I serve mine,” he said, pouring ketchup onto an order of fries. “There’s enough here for everybody.”

The students agree that competition is a good thing. “Competition lowers prices and increases food quality,” Kodra said. “If Jay was the only truck around, we might not have smoothies and salads now.”

Despite their differences, Jay and Ned shared one value in common: the importance of family. Jay said that working with his family was the most rewarding part of his job: “My whole crew, we’re all family. It’s a family business,” he said while handing a student a pack of chips. “We don’t have to work for anybody.” Ned mirrored this sentiment. “We serve from the heart,” he said. “We treat everybody like family.”

Ned and Jay do not see their food as being the greatest gift their food trucks give the community; instead, they focus on the personal relationships they have with their customers. They somehow find a way to treat all Bronx Science students like close friends. Regardless of whether they compete, the most important thing is that they are both happy selling food and spreading smiles to anybody that might order from their truck. And at Bronx Science, there is no shortage of students who could use a smiling face to brighten their day.