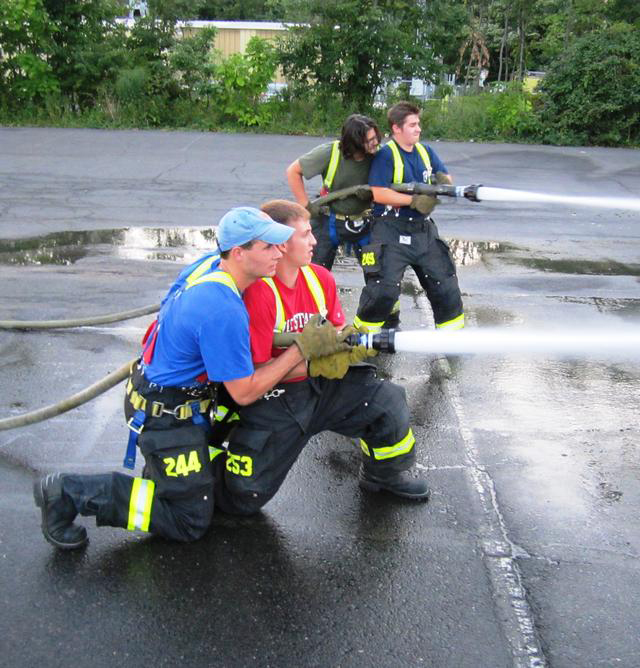 Christopher Dahlem (far left) working with the rest of his firefighting team during a training exercise. Such exercises are vital towards ensuring that firefighters are prepared to fight real fires.

As the fire trucks race by, flashing their red lights and emitting their ear piercing sirens, the gallant firefighters driving them dash to the scene. However, not all of these firefighters save lives as a career. Some do it out of pure kindness as volunteers, choosing to make a difference without earning a penny. Volunteering for the fire department means meeting the same requirements as those who chose to do so full time. Bronx Science boasts two members of the Volunteer Fire Department: Health and Physical Education teacher Christopher Dahlem and senior Ethan Paliwoda.

Growing up with uncles and cousins who were firefighters, Mr. Dahlem has always desired to give back to the community. The fire department gave Mr. Dahlem very fond memories when he was a child, such as hosting holiday parties at the station and allowing the children to play on the fire trucks. In 2008, after graduating from college and teaching for two years, he started volunteering for the Fire Department. Unsure of whether he wanted to pursue a career in teaching or firefighting, Mr. Dahlem decided to continue on with his teaching career and keep firefighting as a side job. After ten years of this commitment, he is still devoted to them.

Like any other firefighter, Mr. Dahlem has stories ranging from disturbing to bizarre. He still remembers the first fire he ever encountered. Immediately after finishing his volunteer training, his first assignment was a house set ablaze the morning after Memorial Day. The house was laden with fire hazards, including many people sleeping in the attic.

Mr. Dahlem also recalls a memory of when a broken power line caused a car to erupt in flames, which quickly spread to a nearby home. “I took a second or two to take a step back and look,” he recounted, “and it looked like something out of a video game or a movie.” In the end, despite the threat of mixing water with the electricity from the power line, the fire proved to be no match for the skill of the firefighting team.

Mr. Dahlem is not the only hero walking the halls of Bronx Science. Ethan Paliwoda ’19 has also been a volunteer since eighth grade. Ever since joining the Explorers Program, Paliwoda has been a faithful part of the volunteer community. As a minor, his experiences are quite different from Mr. Dahlem’s. The younger volunteers are not allowed to actually go out and fight fires. Instead, they train and get mentored by the older members of the squad. Once they turn eighteen, they can decide if they would like to continue as volunteers who go out on calls.