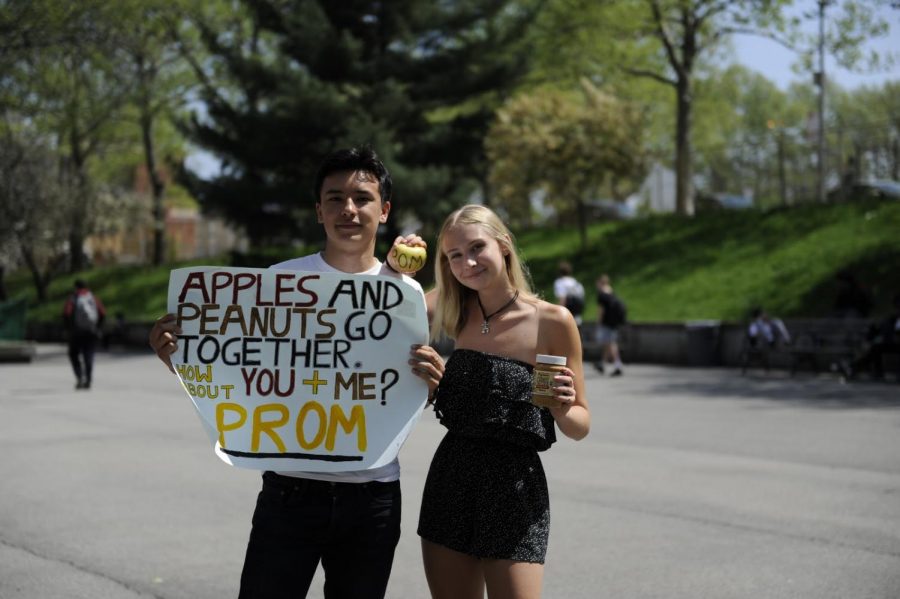 Morgan Witt ’18 and Lolo Rohner ’18 re-enacting their promposal for the school.

The definition of “promposal,” according to dictionary.com is precisely, “an elaborately staged request to be someone’s date to a prom.” As Summer approaches, so does the season of promposals. Senior prom is less than a month away and the Class of 2018 is jittery as many are excited to see the creative promposals to come. “Promposal season is my favorite season. We get to see all the hard work and creativeness from people we wouldn’t expect,” said Sofija Radulovic ’18. The Class of 2017 set high standards for the upcoming promposals. From singing Frank Sinatra to drawing giant chalk hearts, the heartwarming promposals will be hard to top this year.

Prom season blooms as Jung Choo ’18 begins the first of many promposals that have yet to come. Choo is nervous as he stands on the stage. With his promposal strategically planned out, he had his date pick out the winning raffle ticket number as his friends stand eagerly awaiting the raffle ticket “winner,” with the word “PROM?” spelled out on poster paper. The audience cheers with “awes” and screams as they boost the spirits of the promposer. “I guess that I was pretty nervous by the fact that I did it in front of a large crowd, but after she said yes, I was relieved and happy,” said Choo.

Camilla Kobler ’18 walked into the courtyard as everybody around her cheered. She was confused as to why her entrance had made such a scene as people pulled at their phones and began recording. In the distance she saw Aaron Puthan ’18 holding a bouquet of flowers with his friends holding a large sign, “What’s the pastability we sauce together at prom?” Kobler happily accepted his promposal and a matching shirt that Puthan bought for her. “It was a really cute promposal, as it was so unexpected but also creative at the same time,” Kobler said.
“What’s the pastability we sauce together at prom?”
Samee Buccella ’19 used a wrestling pun to prompose to Summer Gould ’18. It was a sweet treat, as Buccella bought a cake to surprise Summer for a birthday. As Gould walked out into the courtyard, she was extremely surprised to see Samee holding a cake. “In the moment, I was so happy and beyond shocked. He managed to make my birthday even more special and marked a really important milestone in our friendship. I have a feeling that I’ll remember it for a really long time,” Gould said.

Although having had some larger public promposals, some proposers kept their special moment to themselves. Lolo Rohner ’18 received her promposal at home from Morgan Witt ’18, and although his promposal did not go as planned, it still ended up being sweet and successful, as Lolo happily agreed to go with him. “I thought we were just meeting for dinner, but then when I was walking to meet him, I saw him coming down the street with a poster and a huge teddy bear, and then I knew. In the moment, I was happy and just really surprised,” Rohner said.

Whether it was a public promposal or private one, the Class of 2018 greeted the prom season with many memorable promposals. Each promposal was personal and had its own unique twist. The Class of 2019 better be prepared next year!