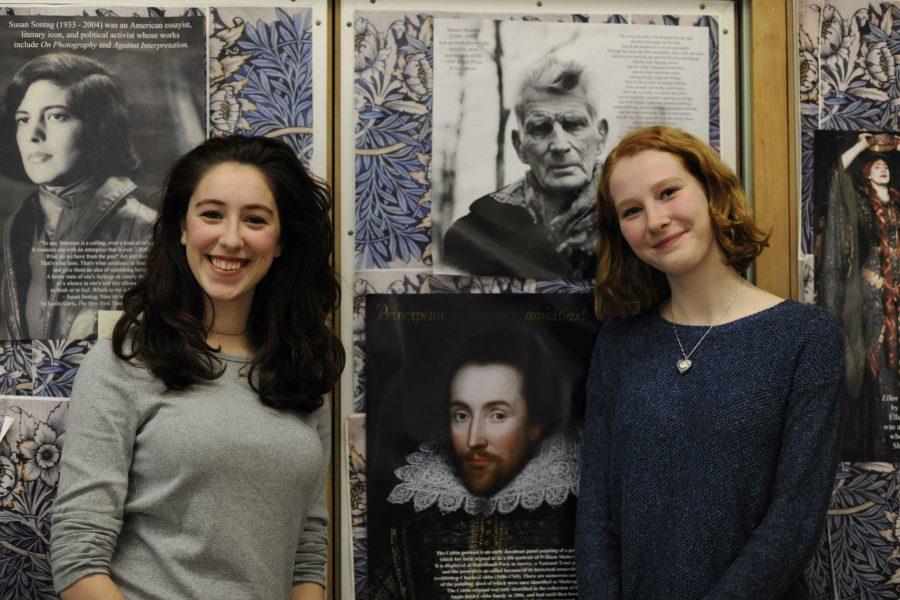 Ava Vercesi ‘19 (runner-up, on left) and Georgia Kester ‘17 (winner, on right), stand in front of a print of the newly discovered Cobbe portrait of William Shakespeare.

On February 16, 2017,  over one hundred Bronx Science students stood before a panel of judges and performed original interpretations of Shakespeare’s monologues during the 34th Annual Shakespeare Competition.

The competition is sponsored nationwide by the English Speaking Union (ESU), an educational organization that seeks to promote English as a global language as a means of enabling young people to discover their voice in society.

Students were instructed to memorize a monologue from one of Shakespeare’s plays, verbatim, and to recite it before a panel of Bronx Science English teachers who acted as judges. The contest was organized at Bronx Science by Mr. Thorp, English teacher and Journalism advisor, who has been running the contest for many years.

All judges were equipped with the same judging criteria; the judges are asked to closely measure how well each performer embodied the role that was chosen.
“There were so many people in that room who really, truly loved Shakespeare,” Kester commented. “That itself was incredible to be a part of.”
After carefully listening to and scoring  all of the students’ recitations, the English teachers selected eleven out of the over 100 performers to compete in the final round.

Mr. Thorp described judging the finals alongside History and Drama teacher Ms. Steiker and English teacher Mr. Brown. “It once again proves just how gifted and extraordinary our students are, in all fields. The students who made it to the final round were truly superb actors who handled Shakespeare’s diction with ease and grace. Mr. Brown, Ms. Steiker, and I had great difficulty in making a final selection, given the overall excellence of all of the performances in the final round. But a decision had to be made,” Mr. Thorp said.

After an intense final round, the judges chose Georgia Kester ’17 as our school  winner and Ava Vercesi ’19 as our school’s  runner-up, for the competition. Kester performed Phoebe’s monologue from As You Like It and Vercesi performed as Joan de Pucelle from Henry VI.

Having won the school-wide competition, Kester received a bid to perform on March 2nd, 2017 at the English Speaking Union’s New York City Semifinal Competition, which took place at the English Speaking Union’s National Headquarters in Midtown Manhattan. For the semifinal round, students were required to perform both their original soliloquy and an additional Shakespeare Sonnet of their choosing. Georgia Kester chose Sonnet 23 to memorize and perform.

Shakespeare’s language has become an integral form of enrichment for students interested in the humanities at Bronx Science. Ms. Steiker encouraged all of the students in her Basic Acting class to participate in the competition, and even incorporated the memorization of a soliloquy into her own curriculum. Such preparation allowed students to forge a comfortable and personal relationship with Shakespeare, Ms. Steiker noted.

“I see Shakespeare as one avenue in which students can connect and communicate through the English language,” Ms. Steiker said.

While Kester did not advance past the Semifinal round, which was judged by a panel of professional theater critics, she emphasized how honorable it was to participate in the citywide competition.

“There were so many people in that room who really, truly loved Shakespeare,” Kester commented. “That itself was incredible to be a part of.”