Women’s Opera Returns to the Met 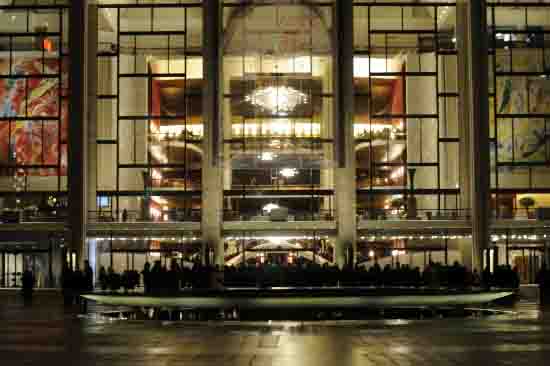 The Metropolitan Opera House after the evening show of L’Amour de Loin.

For the first time in more than a century, The Metropolitan Opera has performed an opera written by a woman to a full house. Finnish composer Kaija Saariaho’s L’Amour de Loin (French for ‘Love from Afar’) has made its Met debut on December 6th, 2016 and played throughout December.

The first opera ever produced by a woman at the Met is Der Wald in 1903 by the British composer Ethel M. Smyth. The current performance was also the debut of the Finnish conductor Susanna Malkki, who has historically become only the fourth woman to take the podium in the company’s history.

The story of L’Amour de Loin begins with the Prince of Blaye, Jaufre Rudel (played by Eric Owens), yearning for a different kind of love, a distant one. His introductory dynamic was maybe too piano for my ears, but it was professionally executed.

Rudel is ridiculed by a chorus of his old companions that he would never find his “distant love,” until a Pilgrim (played by Tamara Mumford) who has arrived from overseas asserts the woman of Rudel’s dream does exist.

Act I ends with Rudel’s uncontrollable mental frenzy from the news.

Throughout the act, Rudel stands on an ordinary rotating stair. Even as a modern interpretation of the High Middle Ages, the plain, unembellished stair was really distracting at it clashed with the rest of the set. Additionally, it seemed odd for someone of high status to lack jewelry, which signified wealth and power in that time period, and be unaccompanied.

In Act II, the other main character, Clemence (played by Susanna Phillips), the Countess of Tripoli, is introduced. The Pilgrim who had returned to the East informs Clemence of her secret lover, Rudel’s. Clemence, who is offended and disturbed, dreams of her strange, distant lover and even questions whether she merits such romantic fervor.

Act II was the highlight of the opera’s comedic aspect, fueled by Clemence’s cruel judgment towards the unfamiliar Rudel; it was in fact also the only time the audience gave out a gentle laugh as the opera sustained a mysterious and somber theme throughout the play.

In Act III, Rudel resolves to visit Clemence in person when the Pilgrim tells her that his identity has been unveiled. Overall, this act appeared progressive and facilitated towards the anticipatory Act IV. The first segment of the opera ended here.

The most striking part of the play commenced in Act IV, the second part of the opera. Rudel, led by the Pilgrim, embarks across the sea and falls ill from anguish as he set off on impulse. While he sleeps through the journey, Clemence pops up periodically from the ocean, suggesting Rudel was dreaming about her.

The chorus seated under the LED-lit platforms made their second appearance during this course. Their incorporation of the clapping choreography was really interesting and unique, and filled in the missing vibrant group synergy to the opera. Clemence’s solo line is featured after this point; Susanna Phillips’s singing demonstrated her mastery of alto-soprano vocal range. Her execution of the soprano lines was breathtakingly exquisite and laudable, as evident through her stable vibrato and impeccable pitch.

The Metropolitan orchestra, conducted by Malkki, made a notable mark in this act. The myriad of trilling notes by high woodwind instruments flute, piccolo, and oboe magnified the sense of mystery that was prevalent, followed by more than two dozen LED-lit platforms that stretched from the pit to the rear of the stage. The reflective LED lights made the scene a spectacular visual feast, evoking a sense of sadness. Rudel eventually arrives in Tripoli, dying.

The dramatic last act advanced with Rudel being carried on a stretcher. When the two distant lovers finally meet, they declare passion, then embrace with a promise to love each other. The rhetoric used in this act is especially captivating and romantic, such as the line, “The last voice I will hear is yours, seeking to soothe me.”

Observing their first confrontation, it appeared illogical, brusque and slightly awkward. It is unusual for Clemence, who did not speak highly of Rudel, to fall in love with him instantly. If Sariaaho was trying to describe the “love at first sight,” this scene should have been extended a lot more to clearly depict the dramatic shift. Rudel then dies in her arms, and the opera ends with Clemence praying to the unknown subject.

Act V was only accomplished through the skillful and calculated delivery of the emotional acting and soulful singing of the two main characters. The ending is rather abrupt and empty; the plot of the last act lacks rationality and even the time to be viably conclusive. For such an important moment that encompassed both the climax and the resolution of the entire opera, the ending could definitely be dragged out to elucidate and accommodate the melodramatic moment of truth when the distant lovers meet for the first time.

While the opera lacked some critical details, coherence and props, the story worked as an opera partly due to a top-notch performance by the singers.

The seemingly challenging idea of a distant love is gratifying, and the opera embraces this irrational theory fully and admirably. More notably, the opera highlighted the gender gap in the male-dominant industries of composition and opera production, shedding light on a much deserved female composer.

It was refreshing to see a Met Opera production by a female composer, and conducted by a female.