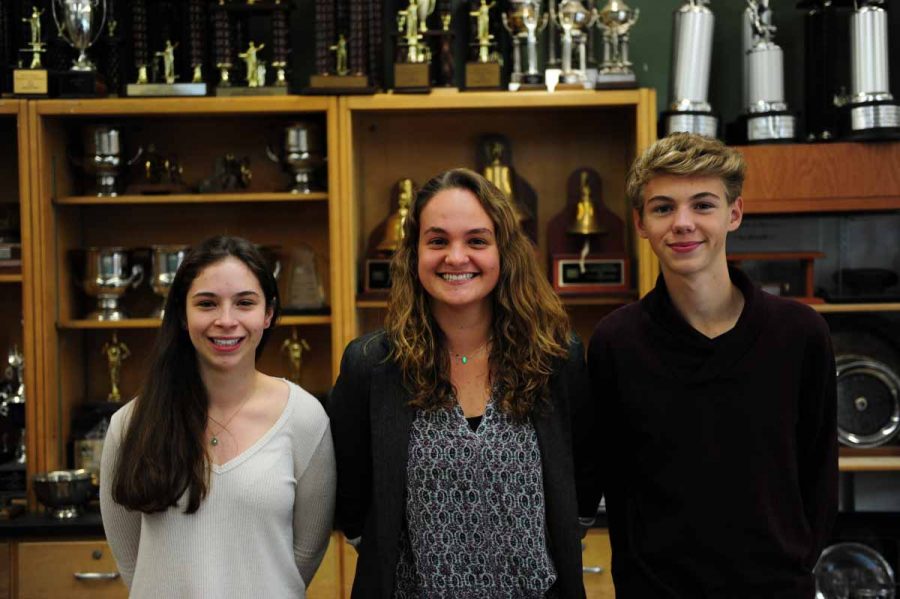 After several personnel changes of directors in the past few years for the school’s Speech & Debate team, the team has gained new leadership. Social Studies teacher, Mr. Timothy Huth has agreed to take on the duties of the previous team director, Mr. Jonathan Horowitz. As director, Huth oversees organizational decisions made for the team and teaches the Debate Leadership class where he oversees the plans made by members of the Speech and Debate student leadership.

“It’s a major responsibility, but I’m excited to get to work with our highly motivated and intelligent students,” Huth said, when asked how he felt about receiving the position. Huth feels that he has the necessary skills to do the job.

“I believe that my background in research, my strength in understanding complex research articles, and my ability to plan and organize events makes me qualified to do the job,” he said.

Mr. Huth plans to bring some changes to the debate team as well. “I want a greater focus on team and squad spirit. I’d like to make sure that each member is being engaged and helped to become the best they can be. I want to build the team up for the future by continuing its successful legacy.”

Speech & Debate Co-Vice President Hunter Sadoff ’17 is ecstatic that Mr. Huth is working dilligently to continue to improve the program.

“There is no activity at our school that captures the breadth of the student body more than Speech & Debate. It is amazing so many students are compelled to join the team, but at the same time, it proves difficult to manage. That is where Mr. Huth comes in. The team frankly cannot operate without him,” Sadoff said.

In essence, Mr. Huth keeps the team afloat in terms of organization. He oversees everything from recruiting novices to booking tournaments all across the United States, for the most seasoned members of the team.

Co-Vice President of Debate, Zoe Posner ’17, plans to hold monthly team meetings on the topic of ‘Women in Debate,’ focusing on how how gender biases and sexism affects female competitors across the country. Mr. Huth fully supports this initiative; both Mr. Huth and Posner hope that by having conversations on the topic, that there will be higher awareness of it and new light can be shed upon a solution to the nationwide problem.

This initiative was started by both Speech & Debate President Maya Osman Krinsky ’17 and Co-Vice President Zoe Posner ’17, who felt it was a necessary measure.

“We made the decision to start this initiative because debate is a very male-dominated activity,” Osman-Krinsky said. “It is mostly frustrating because, as women, we’re told that what we say doesn’t matter, and when we’re in an environment of an activity that we’re passionate about, we should be able to feel empowered.”

“This was an initiative I wanted to start this year to create a support network for female debaters who are definitely underrepresented in the community, and also shed light on issues that women in debate face in order to work towards pragmatic solutions,” Posner added.

“We [women in debate] are disproportionately interrupted and talked over; just look at the numbers from the first Presidential debate. For some reason, we garner less credibility from the moment that we start speaking. We wanted to start having these meetings to create an open forum and a support group of sorts,” Osman-Krinsky explained.

Osman-Krinsky has a positive outlook for the team and its new management. She admires how consistent and responsible Mr. Huth is as debate team director. His organizational skills and clarity make him an excellent leader for all members of Speech & Debate. Right now, Huth is working in conjunction with members of the team to increase transparency and to boost team spirit.

“I am looking forward to overwhelmingly positive changes during the coming academic year,” Krinsky commented.

“The job has been absolutely awesome so far,” said Mr. Huth. “It has been a lot of work, but also fun and exciting for me.”

Osman-Krinsky, Posner, and Sadoff are looking forward to working closely with Mr. Huth for the rest of the year.

“It is evident that tournament logistics have improved this year,” said Sadoff. “Students already feel less stressed out over scheduling flights and booking hotels, all thanks to Mr. Huth.”