The Technical Tactics of TaeKwonDo

There is a special kind of satisfying fulfillment when a martial arts practitioner perfects their art form. 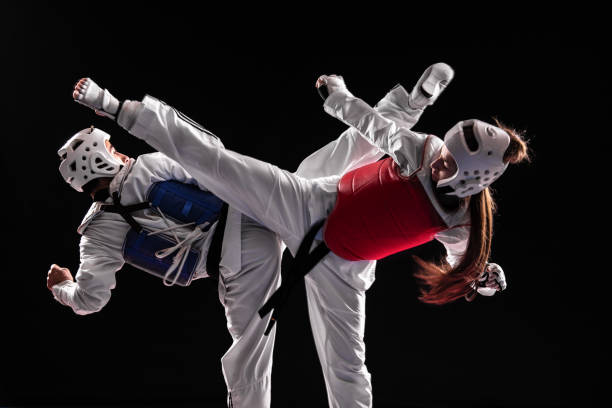 Here is an example of TaeKwonDo sparring in action.

As I lay my chest protector atop my crisply pristine dobok, I feel like a warrior. My dolyeo-chagi kick aims high and true, as the definitive crackle of my loose trousers connecting with the wind rings throughout the dojang.

On the battlefield that I reside on, the greatest conflict is between me and my mind. The combination of my sparring gear and uniform makes for a deadly appearance, one that stares back at me from the mirror of my dojang. My dolyeo-chagi kick, as well as my ap chagi, yeop chagi — all chagis, for that matter, are rewards of self-discipline and strenuous training. Poomsae form, a series of delicate and precise movements meant to enable control and accuracy, repeat over and over in my head. This martial art is not only an art form, as it also serves to rehabilitate the mind, build muscles, and strengthen one’s self-discipline.

I recently spoke with Roy Kang, a third dan black belt. As a practitioner myself, I was eager to hear his perspective about the impact of TaeKwonDo sparring on his life.

“I enjoy TaeKwonDo because it helps me focus,” Kang said. “I learn to practice self-discipline, and I have noticed that my mental health has also improved over the years.” Kang began TaeKwonDo when he was seven years old, and in the present, he has competed in numerous events up to the national level. “Of course, the physical benefits are always there — not only has my stamina improved, [but] I was able to remain fit throughout.”

“When I compete against an opponent, I always make sure to keep my eyes on their eyes. It is easy to look down at their chest protector or their legs to see where they kick, but their eyes often tell it all.”

“Since there are three two-minute rounds, I must save my energy until the end. Then with ten seconds left on the clock in the third round, I can give it my all.”

Through my years of training, I have learned that it is acceptable  to lose. I was initially afraid of getting hurt and failing to meet the expectations of my coach, but after a while, I understood that to lose is to learn from my mistakes. That way, in future events, I will not  make such mistakes again.

Weeks before major competitions, indulging in meals that are healthy and sustainable is crucial. Roy and I, both of Korean heritage, enjoy soondubu jjigae, a Korean dish of vegetables and tofu, and bibimbap, served with a warm bowl of white rice alongside an assortment of vegetables.

TaeKwonDo warriors throughout history remain stellar representations of empowerment and of individual strength. As I continue to kick, block, and defend, I hold my blessings close to my heart and embrace the satisfaction of being a woman who has finally mastered her art form.
“Then with ten seconds left on the clock in the third round, I can give it my all,” said Roy Kang, a third dan black belt.