Just Keep Swimming: A Recap of the 2021-2022 Season of the Bronx Science Boys’ Varsity Swim Team

The Bronx Science Boys’ Varsity Swimming team swept through the league, finishing the season 13-0, cruising to their first ever PSAL championship. 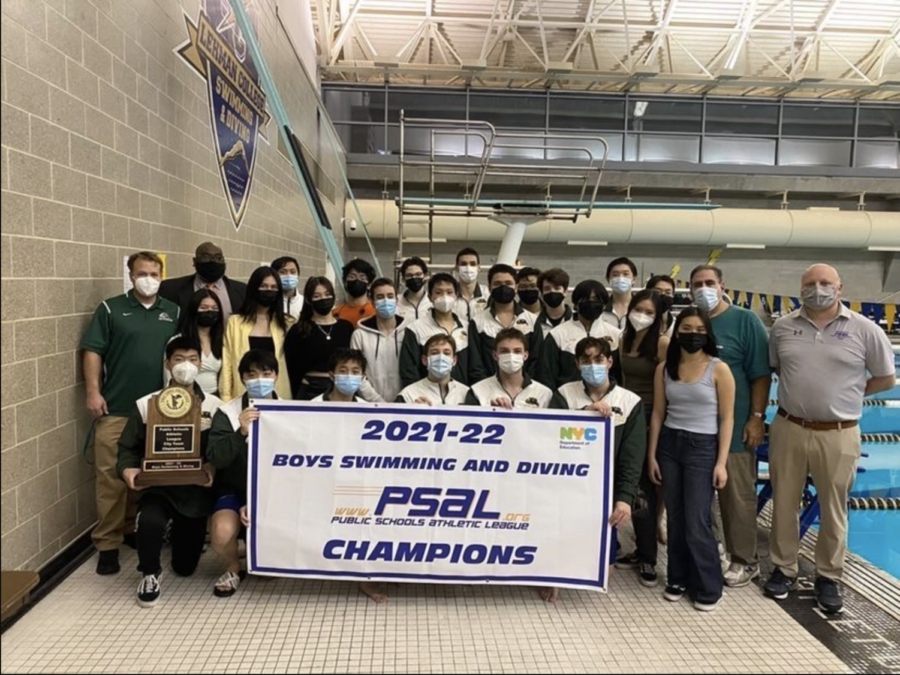 An undefeated season, becoming city champs, and setting PSAL records — The Bronx Science Boys’ Varsity Swimming Team achieved it all during the 2021-2022 season.

The Bronx Science Boys’ Varsity Swim Team has been good during the past few seasons, but they haven’t been able to turn that success into championships. Prior to the 2020-21 season, which was canceled due to the COVID-19 pandemic, the 2018-19 and 2019-20 seasons went the same way: the team won all of their meets in the regular season aside from two losses against Stuyvesant, and then lost in the playoffs to Brooklyn Technical.

Bronx Science had been so close to victory in the past years, and that lingered over many of the swimmers. “Since our ninth grade year, our goal has always been to win a city championship. We made the semifinals my first two years, and getting so close to that goal made us very determined to win in our last year,” said captain John Drumm ’22.

They took that motivation to heart and dominated their competition this year, winning against every team that stood in their way. There was no one who could stop them, and the team felt that shift in the air. “The team has always had a very good atmosphere, but this year we were very confident and focused,” said Drumm.

For some, the newfound success was due to the continued work that the swimmers have put in over the years. Steven Chang ’23 was a junior captain and was one of four swimmers who qualified for states. When asked what fueled their success this year, he said, “continuous practice, and improving my skills as both an athlete and a swimmer.” Towards the beginning of the year, the team completed intra-squad meets in order to build team spirit and push each other to improve.

Although the pandemic didn’t limit team interactions as much as in years prior, it still had an effect on how the team was able to connect with each other. Even as the Omicron surge hit New York City this winter, they were able to stay connected through their use of Facebook messenger as they built chemistry with one another. Team spirit is an underrated aspect of season-long success. Being able to rally together as a team and create an environment where all the members motivate each other is crucial.

The Bronx Science Boys’ Swim Team finished with a perfect ten wins and zero losses in the regular season, finishing first in the Bronx/Manhattan I league. At the top, it was almost a mirror image of past seasons, except with Stuyvesant and Bronx Science swapped places, Science handing them their only two losses of the season.

Science’s two wins against Stuyvesant were especially significant as Bronx Science hadn’t beat Stuyvesant in twenty years. Their first win was a close four point battle, while they won their second matchup by nine.

In the PSAL playoffs, Science etched out a five point victory over Midwood in the first round, and then they were on cruise control for the rest of the way, winning by sixteen in their following matchups against James Madison and Brooklyn Technical.

Bronx Science dominated Brooklyn Tech in the City Championships, winning by a score of 58-42. They started strong, winning the first five events, and wrapped up the meet having won eight of eleven total events. The win was the first in school history, a remarkable achievement that had been long in the making.

It capped off what was an incredible season, filled with many highs and very few lows. This may have been the best swim team the school has ever had. They sported the number one swimmer in the city in three events: John Drumm in the 100-yard fly, and Manoli Mountantonakis in the 200-yard individual medley and 100-yard backstroke. Gareth Chaston was number two in the city for the 200-yard free.

Bronx Science will look to continue their success for years to come, and they hope they can encourage future swimmers to join the team. “I would encourage more to try out because it is an extremely fun environment to be around, and all the kids on the team are very close. You could feel the hunger at every meet. We all wanted to win and created a very positive support aura for everyone,” said Alexander Aney ’22.
“The team has always had a very good atmosphere, but this year we were very confident and focused,” said John Drumm ’22.