The Track Stars of Bronx Science

A look into the Boys' and Girls' Varsity Track, Field, and Cross Country Teams at The Bronx High School of Science. 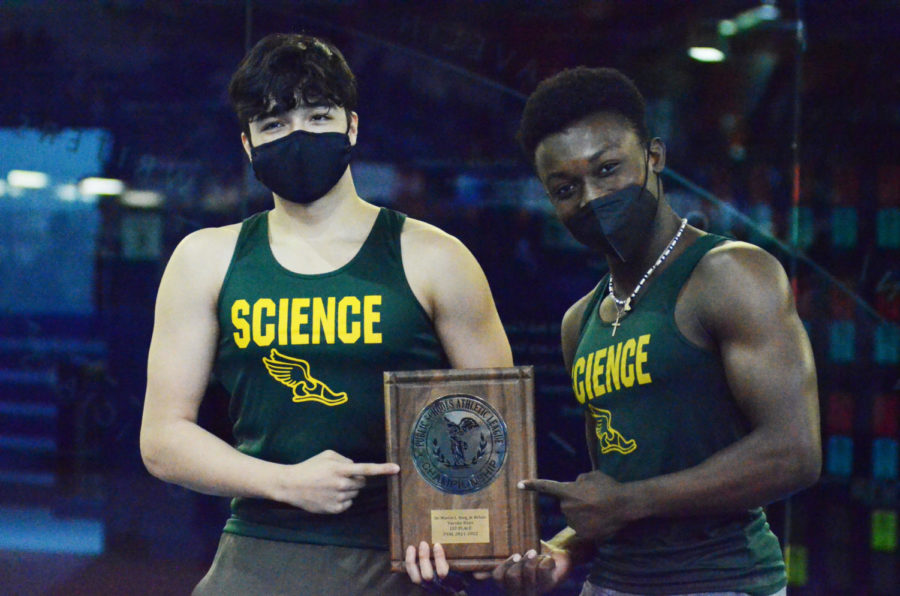 “My name is Samuel Bediako.”

Bediako ’23 is one of the captains of the Bronx Science Boys’ Varsity Track team. As he settles in for the interview, I wonder how he best handles the workload of both school academics and being a captain of a sports team.

“How do you like being on the track team, Sam?”

“It is thrilling to be on the Bronx Science track team. I’m going to dig into a little bit of how I got into track. I hope you don’t mind.”

“I was in the weight room with my friend Leslie. We had some resistance bands, and we stretched them out. We just wanted to see how high we could get over the band. And then Coach Borener was coming around the corner with his track team, and I ran up and jumped over the band. It was a pretty high jump. And he was pretty impressed, so he pulled me over to the side and gave me the paperwork to sign up for track.”

Bediako gives me a big smile as he reminisces.

What does track mean to the runners of Bronx Science?

Track and Field and Cross Country have been around since ancient times, but it was not until the nineteenth century that it became the sport that we know today.

The track and field and cross country team undergo rigorous daily training during both indoor and outdoor seasons to “bring home the gold.”

Bronx Science’s Track and Field teams have 112 athletes on their roster, making them the largest sports team in the school.

Listening to the Girls’ and Boys’ team captains speak about their commitment to track, I sought to attend an upcoming track meet at The Armory in Manhattan. Up until attending the meet, my only knowledge of sports came from television shows that I’d watched as a young child. I was finally ready to learn something new.

On the morning of January 17th, 2022, I woke up early, giving me ample time to commute from Queens to Washington Heights for an 8 a.m. tournament. I walked into that giant brick-red building with my camera bag, not fully knowing what to expect, and I made my way to the seating area.

As I entered The Armory, I was in awe. The track seemed endless, the seats extending as far as the eye can see, leading my attention to the weight-throwing cage at the far end. With a thumping heart, I sat next to the Bronx Science team and watched them prepare for their upcoming races.

Sitting there amongst Coach Borener and around fifty boys, I realized that Coach Payton and the girls’ team were nowhere to be seen. I asked another one of the boys’ captains, Kael Carcamo ’23 when the girls would arrive and that is when I found out the girls’ tournament starts at 12 p.m. when the boys’ meet ends. As I calculated how long I’d have to stay, I looked around to see the games being set up. Different events such as relays, hurdles, high jump, pole vault, triple jump, shot put and weight throw would be held at the same time all across the track.

That’s when I realized that in order to get a good look at everything, I had to walk around and find the best photography angle on the whole track.

I spent the next eight hours photographing hurdles, pole vaults, weight throws, and races as Bediako ’23 and Carcamo ’23 briefed me on each event.

As tired as I was, I was energized by the discipline and hard work that was exhibited by the runners at the tournament. What did competing mean to them?

Elizabeth Newman ’23, one of the captains of the Girls’ Varsity Track team, said, “There’s a sense of adrenaline that you don’t really get any other time. You try to put everything on the line, you push, and you give everything you have for it. Sometimes it works out, and sometimes it doesn’t. Competing was one of the best things about coming back to school in-person and being able to be on the team again, because, during quarantine, it was really hard to gauge where you were in your training and fitness. But yeah, competing is everything.”

Briman Yang ’22, one of the captains of the Boys’ Varsity Track team noted, “Competing means leaving a legacy and being able to work with team members. Being able to push each other to the fullest is what competition is all about, because you always know there is going to be someone there who runs faster than you.”

Although the awards were given to individual competitors, the entire team came together to celebrate those wins like a family. There was no pettiness; it felt like a community lifting one another up. Under and upperclassmen slapped each other on their backs in camaraderie and shook hands with the coach.

“A lot of people think track is an individual sport, but it’s the support that builds the team,” said Kael Carmaco ’23.

Getting back on track (no pun intended) after a turbulent year and a half was no easy feat.

Grace Zagoria ’23 said, “I think the majority of the team is battling through the challenges and doing their best. I’m always glad to put on my uniform and compete alongside some of my favorite people, especially after a year without competitions.”

Many dedicated members exercised during the remote learning period, whether it was by completing morning runs or training with calisthenics. They found ways to keep moving, and they made the best out of their circumstances to continue doing what they love. Even now, they try to remain positive in the face of ongoing COVID-19 obstacles.

Due to the COVID-19 surges over the past few years, with the Omicron variant most recently having passed through New York City in December 2021 and January 2022 (and only now abating), the guidelines to race have remained strict in order to keep the athletes safe, whether it’s through wearing masks or through social distancing — a challenge for a large team. In dealing with these restrictions, athletes such as Diana Campbell ’22 have decided to take a more positive approach towards these new obstacles.

“We have been trying to keep a good spirit about it. When we train, we keep our masks on, which makes our breathing a little bit more difficult when we do our intense runs. But it also makes us stronger, since we have that resistive run. You’re limiting the big breaths that you can take, so over time, we’re noticing that our lungs are becoming stronger, and our conditioning is getting better. So it’s kind of ironic that the pandemic has inadvertently helped us with our workouts,” said Campbell.

The Bronx Science Boys’ and Girls’ Track teams wrapped up their indoor season in victory, placing first in the Bronx Borough Championships on February 6th, 2022.

Marlene Payton, the head coach of the Girls’ Varsity Track team, said, “We had a fairly successful indoor season, considering all of the challenges over the past year. It was exciting to see their growth! Winning Borough championships is always a great experience.”

Ben Borener, the head coach of the Boys’ Varsity Track team, said, “We were expected to win Boroughs, but I’m pleased that we got top tier performances across all the disciplines. The season has been a success thus far, as we qualified a record number for the Championship meet despite all the disruptions caused by COVID-19. We are hoping to contend for a Podium spot at the Championship meet.”

On February 19th, 2022, the Boys’ Varsity Track team went on to place third at the New York City Championship. The athletes were ecstatic about the victory and took the time to celebrate. Now, they are ready to prepare for the upcoming outdoor track season in the Spring of 2022.

The Bronx Science Boys’ and Girls’ Outdoor Track season starts in early March 2022. They will be competing at DeWitt Clinton High School and Icahn Stadium, amongst other venues.
“There’s a sense of adrenaline that you don’t really get any other time,” said Elizabeth Newman ’23, one of the captains of the Girls’ Varsity Track team.