Give Him a Shot: Daniel Jones, the New York Giants’ Quarterback

The sad, unfortunate, depressing story of a quarterback whom the public gave up on before even giving him a chance. 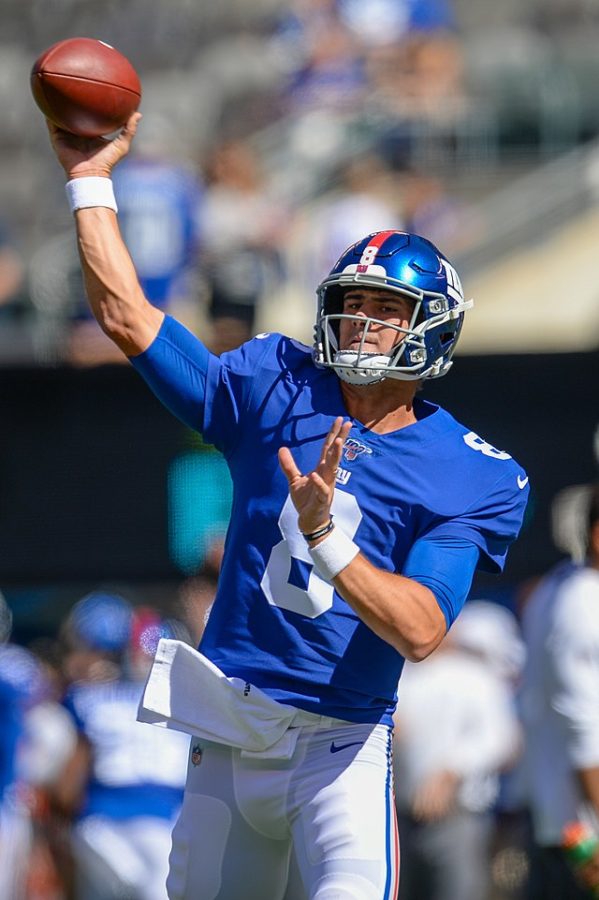 The New York Giants do not have a single wide receiver on their roster who has played in every game this year. Here is Daniel Jones at quarterback for the New York Giants during a game in his rookie season on September 29th, 2019.

As Odell Beckham Jr. lines up beside Cooper Kupp and Van Jefferson on Sunday, Giants fans reminisce on when Beckham dressed in a different shade of blue. It feels like decades since their 11-5 season was ended by his infamous boat trip. The Eli Manning era, with the Super Bowls that it brought, seems like a distant memory. For the last three years, New York Giants fans have been mired in loss after loss. Following the French Revolution of 1848, the new regime found itself devoid of its most able leaders because nobody wanted to be associated with what everybody expected to be a failure of a government. A self-fulfilling prophecy was created. Daniel Jones has found himself in a very similar situation.

Daniel Jones was drafted sixth overall by the New York Giants in the 2019 NFL Draft. His draft profile on the NFL website describes him as possessing “a rare level of quality mechanics” and “good football IQ,” able to “make pro throws,” and “attack deep with accuracy.” As a Duke athlete, he played under the same coach that Eli Manning had when he was at Ole Miss. His profile also applauds his scrambling ability, something that the Giants eventually incorporated into their game plan. For the most part, Jones was a smart quarterback who could stretch the field and escape out of the pocket. Possibly, he was “more of a game manager than a franchise quarterback.”

Since being drafted, Jones has done everything he could to fulfill his draft day expectations. Entering the 2021 season, he was the highest rated quarterback on deep throws when given at least the league’s average time to throw. Daniel Jones’ running played a huge part in filling the void left by Saquon Barkley after he suffered a season-ending injury last year. On a play against the Philadelphia Eagles in week 7, Daniel Jones garnered a wealth of unwelcome internet attention for tripping on air, downing himself less than fifteen yards from the open end zone. What received far less attention, is that on the 80-yard run, Jones reached the fastest in-game speed of any player up to that point in the season. Despite his athletic prowess, the accomplishments of ‘Danny Dimes’ have been overshadowed by the most important job of a game manager — avoiding turnovers.

Through his first three seasons in the league, Daniel Jones tied for 11th, 16th, and 22nd most interceptions. He tied for the most fumbles in the league twice in a row and is currently tied for 8th. He has turned the ball over at one of the league’s highest rates, despite not playing a full season in his career thus far. However, he has undeniably improved his ball security since then.

Large markets such as New York are generally far less patient than those with smaller followings. Their fans and administrations tend to move on from players, coaches, and managers much more quickly than smaller markets. As the face of the franchise, quarterbacks are traditionally affected by these changes most of all. Leading up to the season, both Head Coach Joe Judge and his sponsor General Manager Dave Gettleman voiced their confidence, saying many different versions of, “We’ve done the evaluation on him, and we really believe he’s the guy.”

The two leaders of the Giants team are not without their own faults. Jones’ perceived failure has only exacerbated the public’s anger at Gettleman’s poor early drafting. Meanwhile, Judge has been criticized for uninspired play calling and his clock mismanagement. In the offseason, Judge tried to emulate the age-old ideal of gritty football. Although this style is not formally defined, it generally refers to cultures that focus on the run game — trying to be “the more physical team”— and to tolerate no nonsense.

Even this was not without controversy, as a string of Giants players retired in the middle of training camp, following a mid-practice fight between players. Judge rewarded the team with running laps. This approach, especially loved by disciples of Bill Belicheck, for whom Judge was previously special teams coordinator under, has historically been reliant on winning. Players are unwilling to endure humiliation if they do not get anything out of it. This culminated in the firing of the Giants’ offensive coordinator Jason Garrett in late November 2o21. In the midst of clamors for a winning season, it is very easy to miss the other significant factors influencing Jones’ performance.

Since his rookie year when the Giants offensive line was ranked 17th, it has since ranked 31st in the league, twice in a row. In fact, the primary reason for its 2019 success, right guard Kevin Zeitler, was cut by the team before the start of this year.

Daniel Jones may not be Eli Manning, but Eli was never perfect. In his two championship seasons, the legendary Giant tied for the 16th and 10th most interceptions in the league. Like Manning once was, Daniel Jones is complemented by an excellent defense. The Giants’ defence has undeniably underperformed this season, but give the team one more year with a competent defense, an improved offensive line, and competent — or at least healthy — receivers; this is the least that should be afforded to Dimes before the Giants give up on him outright.
Since being drafted, Jones has done everything he could to fulfill his draft day expectations. Entering the 2021 season, he was the highest rated quarterback on deep throws when given at least the league’s average time to throw. Daniel Jones’ running played a huge part in filling the void left by Saquon Barkley after he suffered a season-ending injury last year.