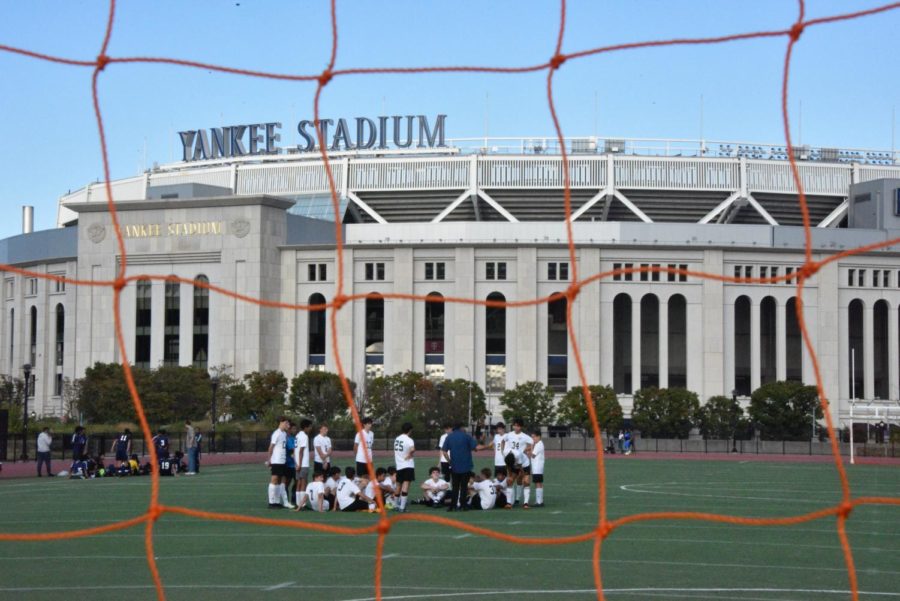 The “family” comes together before a game.

It’s a cool Friday afternoon at Harris Field. Dozens of Bronx Science students crowd the sidelines as a ball rolls toward Anis Mustapha-Sabbat ’23 in the corner of the soccer field. When the ball reaches his foot, Mustapha-Sabbat pushes it through two opposing defenders. After regaining the ball, he winds back his left leg and swings, burying the ball in the corner of the goal. Mustapha-Sabbat turns to face the Bronx Science students as they erupt in cheer. He runs towards the crowd with a smile on his face, being swarmed by his peers before he can make it off the field. “It was the highlight of the week,” said spectator James Yao ’23.

As the Bronx Science Boys’ Varsity Soccer team approaches the end of their season, they remember many of these exciting moments. After a year off due to the pandemic, the team finished third in the Bronx A league standings with a successful record of seven wins, two losses, and one draw.

The Boys’ Soccer team started their season early in the school year. With a late end to summer, the team’s first game came on Friday, September 17th, 2021, after only four days of school. The game, where Mustapha-Sabbat celebrated his goal with the crowd, ended in a 2-0 victory for Bronx Science. Team captain Tai Geller ’22 reflects on the game as his favorite moment from the season. He called the match “exhilarating,” adding, “we haven’t had that [level of fan attendance] in past years.”

The team’s dominating performance not only displayed a high level of talent, but also gave fans something to be excited about.

James Yao ’23, for one, was happy to see the team back in game. “Seeing my friends play on the field, scoring goals and working as a team — it means a lot to me,” he said. Yao compares rooting for the school team to supporting his favorite professional soccer club, Chelsea, at their home stadium Stamford Bridge.

After their first match, the Boys’ Soccer Team’s went on to garner three consecutive wins. Although their winning streak was later broken, the team remained high in the league standings, determined and optimistic as ever.

Despite the team’s first loss, coach Mr. Cancellaro focused on the bright side. Looking at his players packing up their gear, he smiled. “It gives me chills even thinking about being back together as a group again. As a family,” he said. “I think we’re building culture. And we’re getting better at helping each other out, and understanding our strengths and weaknesses.”

Regardless of the playoffs’ outcome, Boys’ Varsity Soccer remains thankful for the experience of playing in a full season. Multiple Bronx Science alumni, including former members of the team, have even attended games to celebrate the return. And as the team’s four seniors (Jonah Bromley, Tai Geller, Maximilian Kramer, and Lucas Schwed) move closer to their graduation, there is an emphasis on having new students join the “family,” as Goldman refers to the team. “I’ll see you guys next year!” is his message to younger students looking to try out.