A Journey Through the NFL Postseason

A guide through what went down in the NFL Playoffs this year. 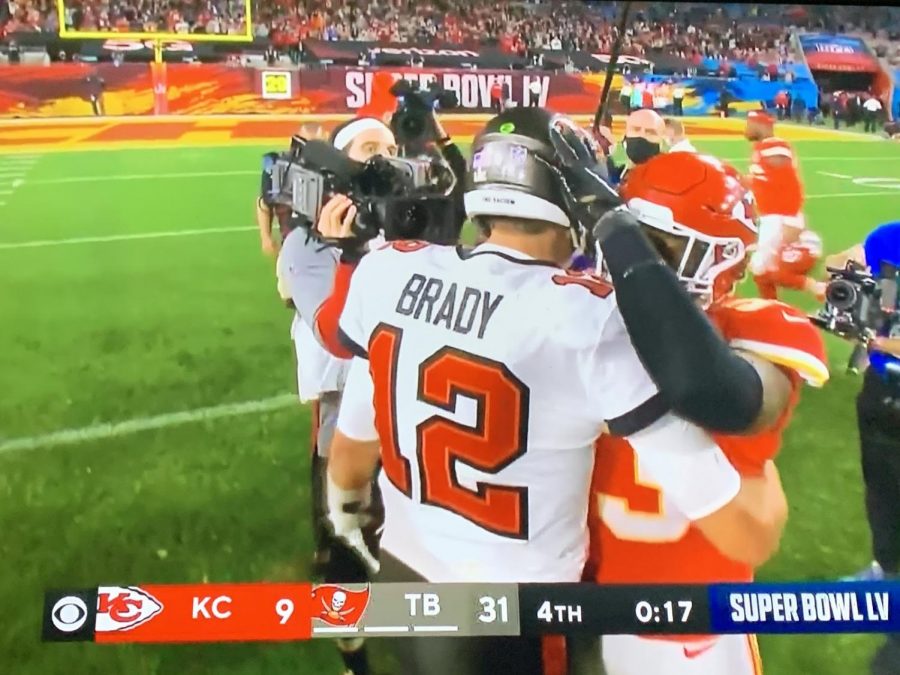 Although the game did not officially end, the Bucs and Chiefs players showed good sportsmanship as time was running out. For Brady, this was his first season on a team not named the New England Patriots, and in his first season, he helped to earn a championship against the Bucs.

Sports were anything but guaranteed this year. Ever since March 2020, COVID-19 has spread around the world, prompting many sports seasons to be halted. When the pandemic first broke out, the NBA suspended the 2019-20 season, and many leagues followed soon thereafter.

It left one major league sport without a champion: the National Football League. On July 21, 2020, the NFLPA announced there would be no Preseason games for the 2020-21 season. However, the regular season was unaffected, and the NFL season began on September 10th, 2020.

On January 9th, 2020, after 16 weeks of intense football, the league’s best teams came together for a postseason like no other. Depending on the stadium, a very limited number of fans were allowed to come and cheer on their team. Most fans remained cooped up at home, cheering on their favorite teams in pursuit of the Vince Lombardi trophy.

Like every year, the postseason began with the Wildcard round. This year brought back familiar faces, as well as new faces trying to punch their ticket into the Divisional Round. For the Baltimore Ravens, it was a chance for redemption after a Wildcard loss the previous year. Their 20-13 win over the Tennessee Titans answered some questions about whether the 2016 Heisman Trophy and 2019 NFL MVP winner Lamar Jackson was capable of leading his team when it mattered most. However, Hamza Malick ‘21 was not particularly impressed, stating, “Lamar is good at beating bad teams. I think he may have better runs in the future, but it would be as a result of other key players, not himself.” Whether or not this is true remains to be seen.

On the other end of the Wildcard round, Tom Brady and the Tampa Bay Buccaneers also squeezed their way into the Divisional, defeating the Washington Football Team. But for other teams, there were many surprises, most notably the Seattle Seahawks losing out to the Los Angeles Rams 30-20, after many people praised Seahawks quarterback Russell Wilson for his MVP-worthy season.

Then came the Divisional Round where the Wildcard winners played the winners of each division. It was a battle of the quarterbacks. 2021 NFL MVP Aaron Rodgers went up against the Los Angeles Rams, beating them 32-18. Unfortunately, Lamar Jackson was shut out in their game against the Buffalo Bills, losing 3-17. The Cleveland Browns, who were held to high expectations given their talent on the roster, lost out to the 2020 Super Bowl Champion Kansas City Chiefs. And in arguably the most exciting playoff matchup until the Conference Championships, the all time greats Drew Brees of the Saints and Tom Brady of the Buccaneers went head to head in what could be Brees’ final game of his career.

The Conference Championship matches allowed the potential Super Bowl teams to display their dominance and head off to Tampa Bay for Super Bowl LV. First came the Packers and Buccaneers, with Rodgers versus Brady, a battle between two of the top players in the league. Brady and the Bucs won in a thrilling game 31-26, making this the 10th Super Bowl in which Brady made an appearance.

The Bills surprised the Chiefs in the first quarter, going up 9-0 in the first quarter. But the Chiefs #1 ranked offense proved to be too much to handle for the Bills, as Mahomes and his team went on a 21-0 run to win the game 38-24. Malick was not surprised at the initial shock, saying, “Mahomes came back multiple times last year, including in the Super Bowl. He’s so incredibly clutch that you can’t ever count him and the KC [Kansas City] offense out.”

And then there were two, with Brady versus Mahomes. Patrick Mahomes is having a superb season, breaking records left and right in his young career. In his 2019-2020 season, Mahomes became the youngest player to win both the NFL MVP award and the Super Bowl MVP award. Since being drafted in 2017, Mahomes has continued to reach great levels of success, and this Super Bowl would be his chance to catch the elusive Tom Brady in talks of being the greatest of all time.

Many people claim that Tom Brady may be the ‘Greatest of All Time’ in football, having made 9 Super Bowl appearances prior to this one, and winning 6 of them. Like LeBron James, it seems the older Brady gets, the better he performs. At age 43, he will be the oldest player to star in the Super Bowl. Brady already has the most rings of all time with six, but to extend that to seven rings with a win at Tampa Bay is a testament to his greatness as a player.

On February 7th, 2021, Tom Brady and his Tampa Bay Buccaneers went head to head against Patrick Mahomes and the Kansas City Chiefs. What many people had hyped up to potentially be a great battle coming down to the final play ended up not being the case. Instead, the Buccaneers defense absolutely shut down the Chiefs’ offense, holding them to a mere 9 points. The Bucs scored 31 points, and that was enough for the Buccaneers to take away championship status from the Chiefs.

In a year where nothing felt normal, a sense of normalcy came along with watching Tom Brady lift up yet another Lombardi trophy.
“Mahomes came back multiple times last year, including in the Super Bowl. He’s so incredibly clutch that you can’t ever count him and the KC [Kansas City] offense out,” said Hamza Malick ’21.