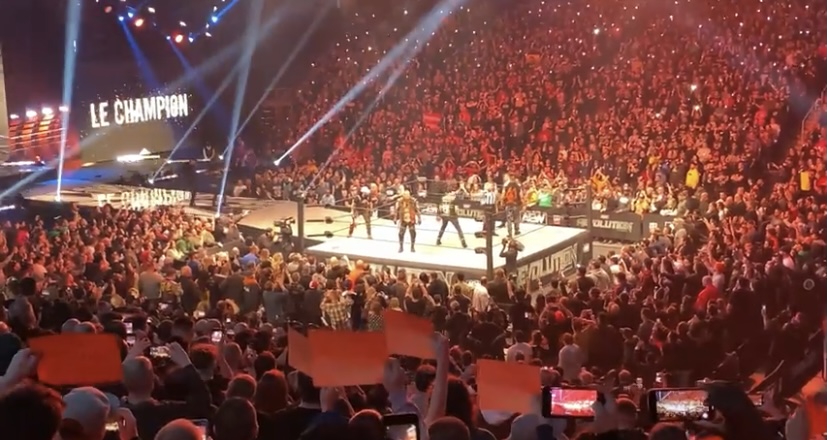 “And accompanied by Jake Hager, from Manitoba, Canada – weighing 225 pounds, he is the AEW World Champion – Le Champion, Chris Jericho!” That is how Christopher Keith Irvine – or Chris Jericho – was introduced in the January 22nd, 2020 episode of All Elite Wrestling (AEW) Dynamite, which took place on his own cruise ship experience, the Rock N’ Wrestling Rager at Sea. Whether you know him as an author, actor, rock star, podcaster, entrepreneur, or professional wrestler, Jericho has made his mark through a range of eras and genres.

On this past October 9th, 2020, AEW hosted a “30 Years of Chris Jericho” special anniversary edition of AEW Dynamite. The main event of the night was Chris Jericho teaming up with his Inner Circle faction member, Jake Hager, against Dr. Luther and Serpentico. Luther has been a longtime, behind-the-scenes friend of Jericho’s since the early 1990s, before either of them broke into their individual scenes, making this match all the more personal.

While Luther continued to wrestle in Japan, Chris Jericho competed in Mexico, where he went by the name of ‘The Lionheart.’ After a brief stint in Extreme Championship Wrestling (ECW) during 1996, where he won the ECW World Television Championship, Jericho caught the attention of the second biggest promotion in the world at the time, World Championship Wrestling (WCW). Though he found significant success in the now-defunct business by winning the Cruiserweight Championship and the World Television Championship, it was not until the very last stretch of the millennium that he finally broke his glass ceiling.

On August 9th, 1999, Jericho made his iconic debut with the World Wrestling Federation (now known as the WWE), by interrupting The Rock. Afterward, he spent almost two decades in the WWF/WWE. His accomplishments there include winning the European championship once and the Hardcore championship once, the U.S. championship twice, the world championship three times, Tag Team championship seven times, and the Intercontinental championship for a record breaker of nine times. In addition to all or this, Jericho was the first ‘Undisputed Champion’ in the history of professional wrestling, by defeating both Stone Cold Steve Austin and The Rock in the same night.

It was not until 2017 that Chris Jericho went to test his prowess in Japan. Upon returning to New Japan Pro Wrestling (NJPW), he challenged Kenny Omega for the International Wrestling Grand Prix (IWGP) United States Heavyweight Championship. Though he lost, Jericho was awarded his first five-star rating from Dave Meltzer of the Wrestling Observer Newsletter, at the age of 46. By the next year, Jericho successfully won the IWGP Intercontinental Championship by defeating Tetsuya Naito, becoming the first wrestler to win both the WWE and IWGP Intercontinental Championships.

After another successful year in the indie circuit, Chris Jericho signed his official full-time three-year contract with the upstart promotion group, All Elite Wrestling (AEW) in 2019. After beating Kenny Omega at AEW’s inaugural Double or Nothing event, Jericho went on to become the first ever AEW World Champion in All Out. Although the “Demo God” or “Le Champion” lost his championship to Jon Moxley this year, Jericho is still working for AEW on a weekly basis, by wrestling or even by being a ‘color commentator,’ a sports commentator who is the assistant to the official play-by-play commentator.

“Chris Jericho’s career is something that will be unmatched. It’s less about the thirty years that he has been wrestling and more about how he has adapted his character and his ring work to the changing times,” said Haris Khan ’21. “He’s simply becoming more of an icon as he gets older and transitions away from his role as an active wrestler.”

With Chris Jericho’s many years in the business, fans around the world have witnessed their favorite matches and envision many that they hope to see in the future. Khan said, “My favorite match involving Jericho was with Michaels at Wrestlemania 19. I’d like to see Jericho vs Jeff Hardy as a real championship match.” Asif Anzum ’21 said, “My favorite was No Mercy in 2001, against The Rock for the WCW Championship. I want to see Jericho and Kenny (Omega) have one more match in AEW.” Nehal Hossain ’21 said, “My favorite feud of Jericho’s was against CM Punk. I’d like to see Jericho face The Fiend.” The Fiend, also known as Bray Wyatt, is currently wrestling for the WWE and is arguably one of its biggest stars at the moment. Though wrestlers may be at the height of their careers in different companies, the saying “never say never” has revealed itself with numerous instances of truth. Look no further than Chris Jericho himself — he has put in thirty years in the professional wrestling business, and there is no stopping him.
“Chris Jericho’s career is something that will be unmatched. It’s less about the thirty years that he has been wrestling and more about how he has adapted his character and his ring work to the changing times,” said Haris Khan ’21. “He’s simply becoming more of an icon as he gets older and transitions away from his role as an active wrestler.”