Since 2010, the League of Legends Esports scene has grown tremendously. Now, we celebrate the ten year anniversary of the World Championship the best that we can during the Coronavirus pandemic. 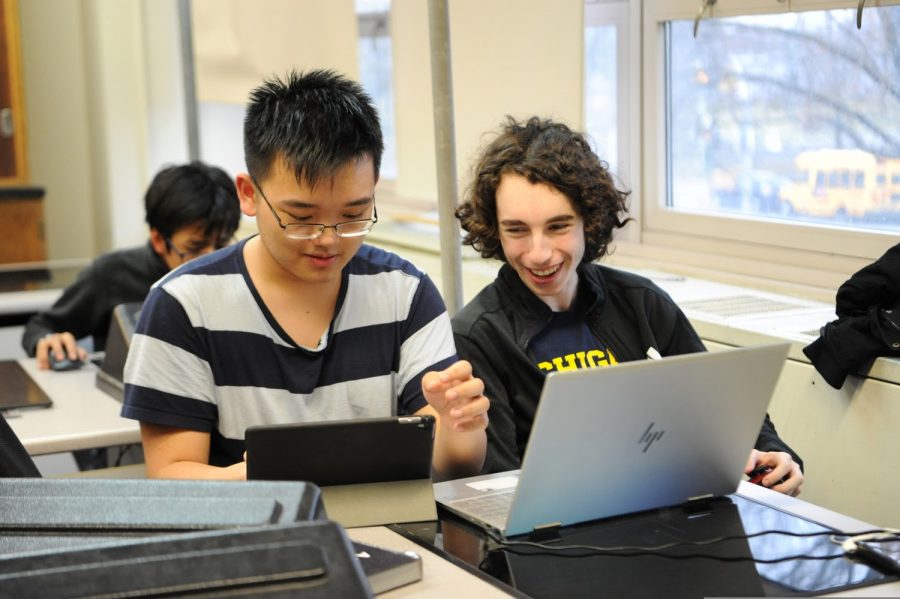 Members of the Esports Club talk together during a club meeting, pre-pandemic.

At this time last year, the Chinese Esports team, FunPlus Phoenix (FPX), won the world championship of the popular game League of Legends (LoL). League of Legends is an online battle arena video game in which multiple players can play at the same time. In FPX’s wake, they left numerous teams vying for another chance at being considered “The Best in the World.” Although this may seem fairly average in the wide world of professional Esports, die-hard League of Legends fans sat at the edge of their seats for most of October 2019, captivated by the exciting show of talent.

A year later, in Shanghai, China, a similar battle is ready to take place. However, this year is very different from the previous one. Barely any of the previous crown-holders are fighting this year, having been stomped by the new, ambitious teams of their respective regions. The aforementioned FPX was unable to make the top four of their regional championship, missing their shot at making it into the world championship.

A few of the well-known teams, such as the Korean team, T1 (previously known as SK Telecom T1), and the 2018 champions Invictus Gaming, both missed their shots at the Worlds as well. During their respective regional spring seasons, T1 finished second place while Invictus Gaming won the split. However, during the summer season, also known as the world qualifiers, both teams underperformed with T1 losing the first game of qualifiers and Invictus Gaming losing in the second game. Both organizations lost their spots to dominant regional favorites such as DAMWON Gaming and Top Esports respectively.

The two-time world champion star player of T1, Lee “Faker” Sang-hyeok, coined “The Unkillable Demon King” by fans, also did not make it to Worlds. “I’m not an avid watcher, but I think everyone who has played League of Legends has heard of Faker. He’s like the star of the game,” said Romona Ling ’22. Within the League of Legends community, Faker is considered one of the best in the world due to his countless achievements and titles.

This year, winner picks were clear from the beginning: DAMWON and Top Esports. Major talents such as Su “ShowMaker” Heo from DAMWON and Ding “knight” Zhuo both had remarkable showings in their regional tournaments. They have clear shots at becoming the most valuable player of their respective teams, although both teams have fantastic rosters filled with experienced players. Top Esports has previous World Champion, Wen “JackeyLove” Bo Yu and star rookie Jiahao “369” Bai.

Fan-favorite European teams, G2 Esports and Fnatic, both had major showings with supporters cheering on every game. Both G2 and Fnatic have seemed to defy expectations, with G2 showing a dominant performance thanks to the all-star combo of players Rasmus “Caps” Winther and Marcin “Jankos” Jankowski, despite the team having a lackluster summer split. On the other hand, Fnatic (once seen as one of the middle-of-the-pack teams) nearly knocked out Top Esports in a close best-of-five series due to the performances of players Martin “Rekkles” Larsson, and Oskar “Selfmade” Boderek.

No teams from North America made it very far, with the region outclassed by dominance from China, Korea, and Europe. This year, North America’s regional teams of Team Liquid, Team SoloMid, and FlyQuest all failed to make it to the semifinals. Even so, there were many strong performances from rookie players new to professional play. Team Liquid’s Edward “Tactical” Ra and Team SoloMid’s Mingyi “Spica” Lu both had extremely strong performances, even compared to other senior players. For example, during a match between TSM and Gen.G (the third-place team from Korea), Spica impressively stunned the entire enemy team and made them vulnerable to attack for a few seconds. This gave an opportunity for Gen.G’s team to be wiped and put TSM back in the lead.

Although, fan favorites and regional dominance does not mean everything. Despite the hype given to many teams, there were many surprises on who made it to the finals. Viewers from all around the world watch Top Esports struggle against Fnatic and eventually fall in a lopsided match between their dark-horse regional competitor, Suning. Suning is a team that most people had put aside, after all, they were only a third-place team. But with this underestimation came domination as Suning had a clean run to finals. On the other hand, the ever favored DAMWON Gaming continued to outperform and outplay their competitors, only dropping two games on their way to finals.

After a long four games, DAMWON Gaming eventually prevailed as the world champions with dominating strategy and teamwork. Suning put up an incredible fight, taking one game off DAMWON due to the team-wipe lead by player Chen “Bin” Ze-Bin.