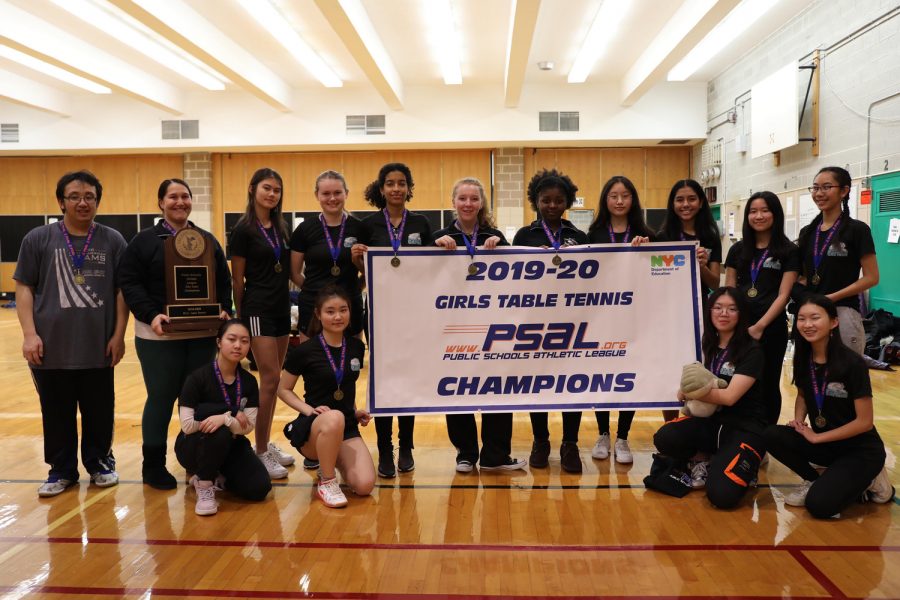 With the total game score tied at 2-2 against Brooklyn Tech in the championships, tensions ran high as first singles player Gina Seo ’22 battled in the final game to decide the team’s fate. The slow-paced, but intense match had everyone watching on the edge of their seats. Seo’s hand shook with nerves. Nonetheless, Seo would not let the pressure get the best of the team’s hard work, repeating to herself, “It’s your game.”

As Seo scored the winning point, beating her rival 11-6 in her fifth game, the Wolverines cheered with joy and relief, having secured the Bronx Science Girls’ Varsity Table Tennis team’s PSAL win for the second year in a row.

At the beginning of the set of five games, Bronx Science started off strong as second singles player Jasmine Lo ’21 won in four matches. However, the defending champions did not go unchallenged as the third singles and second doubles lost, bringing the score to 1-2, Science to Tech. This put immense pressure on the first doubles, Lara Belton ’21 and Chloe Guerrero ’22, and first singles, Seo, to win their matches.

Since the beginning of last season, the team built an impressive record of going undefeated for nearly thirty games. When Brooklyn Tech had the advantage in the final game, the Wolverines felt the heat. “It was very nerve-wracking to say the least. We were losing,” co-captain Belton said. “We were down in the first set, and we came back winning eight points in a row to win that set and then went on and won the fifth set.”

“I’ve never felt so much pressure,” Seo recalled. Yet, despite her nerves, Seo was able to play with even more deliberation and determination than ever. “This was my first time playing a really calm game,” she said. “In my whole time playing table tennis, I’ve never really taken the time to think about each point.”

After a hard fight, the team won the two remaining games, bringing the final score to 3-2, triumphing over Brooklyn Tech and defending their mantle.

Having not lost a single game for the past two years, the Bronx Science Girls’ Varsity Table Tennis team is undeniably the strongest team in the Table Tennis Public School Athletic League. The team practiced for hours a day, four days a week, with their coach Ms. Sisilli overseeing them with occasional help from Bronx Science alumnus Michael Song. With the more experienced players helping teach those newer to table tennis, the girls worked together to improve not just as singles or doubles players, but as a team.

“We warm up with anyone on our team. It’s only an eleven person team so you know one another very well, at least with playing style and stuff like that,” second doubles player Emery John ’20 said. “[Practices are] a combination of playing and also just chilling. There is team bonding built into practices.”

Although it is a sport where only one or two people play at a time, the table tennis team has a close, supportive dynamic.

“We’re really united as a team. If one person loses, we all feel it. If one person wins we all feel it,” co-captain and second doubles player Joy Herrera ’20 said. “When each game is going on there’s a lot of support from the team. We’re always watching each other’s games and cheering if you get a point.”

Many of the players like Belton, Lo, and Seo have practiced for over four years outside of their high school careers. With this extensive experience and knowledge of the game, they held themselves to a high standard. However, it was the team’s unity and commitment to the sport that ultimately drove them to victory.

“Actually seeing the fruits of your hard work is indescribable. Everyone was rejoicing together, it was really nice. We really came together as a team, ” said Joy Herrera ’20.

“I think everyone’s dedication and motivation was a lot because we all wanted to win so we all worked very hard during practice,” said Lo. “[When we won], we were all really happy, and at the same time, more relieved that we managed to reach our goal and keep our expectations.”