How the Girls Volleyball Team won the PSAL Championship for the first time in Bronx High School of Science history. 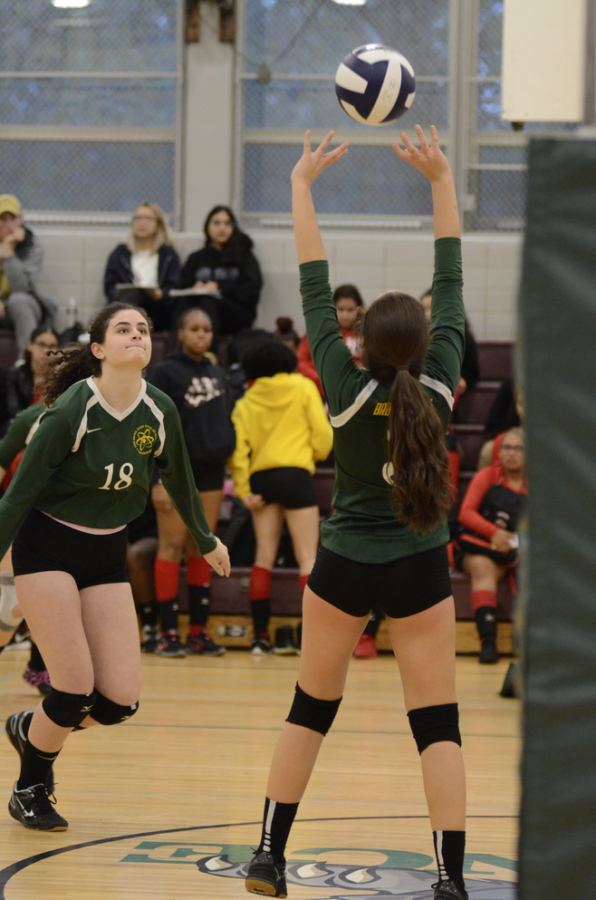 As Jessica Muller ’21 sets the volleyball high into the air, Carolina Hohl ’22 prepares to aid her in bumping it over the net. “I am ready for anything when I’m on the court,” said Muller.

The scoreboard in the Queens College gym beamed “24:22.” The Bronx High School of Science’s Girls’ Varsity Volleyball team was a mere two points away from losing the PSAL championship to Brooklyn Technical. While the Bronx Science supporters in the crowd were filled with tension as they suspected impending defeat, the girls on the court remained resolute. After a season of persevering through challenging matches, the team knew that this was not the time to forfeit their fight. As the team prepared themselves to receive the serve, they also hardened their trust in one another and determination to win. The girls sprinted after every ball, preempting their opponents from gaining any advantage against them. These efforts carried through the second set and the Wolverines not only pulled through that set but won the whole game.

The girls’ win on November 19th, 2019, was the first time that The Bronx High School of Science Girls’ Varsity Volleyball team had ever claimed the city championship. The team, coached by Mr. Skilins and led by captains Dary Lollos ’20 and Amanda Maeglin ’20, consists of seventeen girls, ranging from sophomores to seniors. Undeterred by the grade differences, the girls are more than just teammates. They are true friends who know that they can rely on each other on and off the court. “Over the past few years, the girls’ volleyball team has gone from a group of students who love the same sport to a group of close friends that draws their strength from their love for both the game and each other,” said Maeglin.

This camaraderie among the team was necessary in helping them overcome the challenges that awaited in the upcoming season. Although their performance during the preseason suggested that the team had the potential to become city champions, when the season started, their efforts were overshadowed by the demanding workload of school. These additional challenges hindered the girls’ ability to devote the same strength to practices that they had over the summer. However, once the playoffs started, the girls knew that they had to fully commit in order to win the championship for their school and themselves. “I don’t know what happened, but something clicked,” said Grace Lorch ’22. “We realized two of our starters and both of our captains are leaving next year. This was their one shot.”

The beginning of playoffs was unsteady. While the team won 2-0 against East Harlem pride, miscommunication between team members was a prevalent obstacle. Yet as playoffs continued, the team gained momentum. They pushed through disappointments and injuries, using their struggles as motivation. The team especially needed to use their unfaltering determination to win the quarterfinals against Townsend Harris. Townsend Harris defeated them 2-0 in playoffs last year, so the girls were prepared to fight as hard as they could. “Although it was difficult, it was also such a rewarding game,” said Maeglin. “It was the best I have seen the team play in my two years as a captain.” This win surged the team’s spirit, allowing them to gain their footing and dive into the rest of the playoffs to land in their rightful spot in the finals.

The final game mirrored the team’s journey throughout the year. According to Montana Lee ’21, a spectator of the game, the team struggled with consistency in the first set. Falling behind on the scoreboard, the team had to employ a new level of effort in the second set. Although the trudge up the ramp was slow, the girls were able to overcome their large point deficit and make it to only one championship point behind. Similar to the playoffs, something clicked. “During the second set after warming up and my competitiveness coming out, I realized I needed to step it up and played the way I normally play, and everything felt like it fell into place,” said Lucia Cho ’21. The girls knew they had to fight for their team. Their nerves of steel and trust in each other from years of building their friendship allowed them to stay focused and confident, and they made an incredible comeback to take the set 26-24. “Once we won the second set, I knew we had a really good chance of winning finals,” said Maeglin. The team won the third set by a nine point lead.

Although this outstanding win made Maeglin “so incredibly proud to be on the first Bronx Science volleyball team to bring home the championship banner,” this momentous victory has only made it more difficult for her to leave the people that have been her family for the past four years. While the captains are downhearted to say goodbye to their team, they are not in the least bit worried about its future. “Amanda and I worked on this team for two years now, and this is the legacy we’re leaving behind,” Lollos said. “But I also know that all of our players are really good, so they’re going to be great next year.”

“I don’t know what happened, but something clicked,” said Grace Lorch ’22.