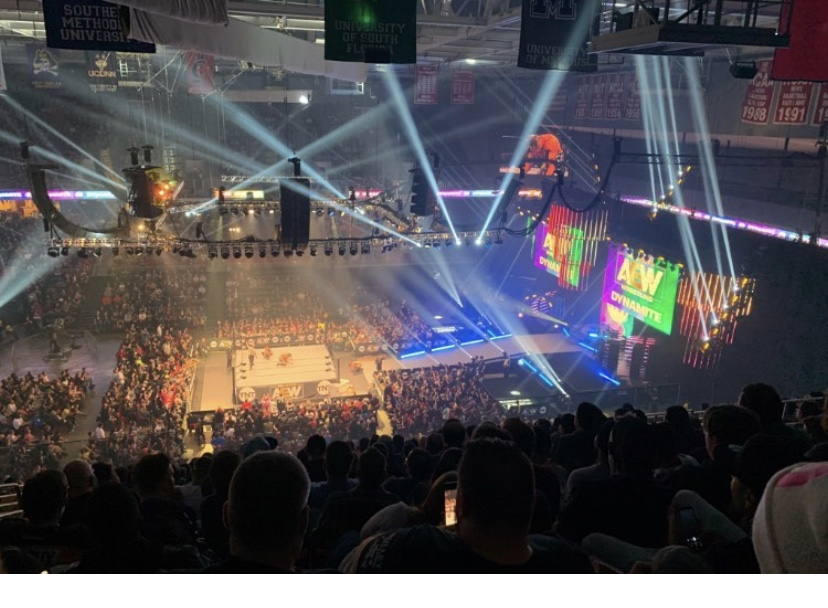 The opening match at a sold-out AEW Dynamite show.

In the late 90s, Vince McMahon’s World Wrestling Entertainment (WWE) Raw and Ted Turner’s World Championship Wrestling (WCW) Monday Nitro went head-to-head on Monday nights. This period, between 1995 and 2001, was called the Monday Night Wars. Both brands competed for higher ratings, making fans switch between channels and choosing sides. By 2001, the ‘war’ was put to a close when McMahon bought WCW.

Nineteen years later, professional wrestlers Cody Rhodes and The Young Bucks, a team of Nick and Matt Jackson, set off to start a brand that would allow pro-wrestling fans to enjoy their sport at a time when WWE lost many of the qualities it once had during the Monday Night Wars. The new brand’s progress improved immensely after the wrestlers hosted an event in 2018, called ‘All In.’ After an extremely well-received show, Shahid Khan, the owner of the Jacksonville Jaguars and Fulham F.C., offered to help create a greater brand. This brand, which would soon put on four successful pay-per-views, came to be named All Elite Wrestling (AEW).

With these two brands colliding on Wednesday nights, fans around the world are calling this the beginning of the ‘Wednesday Night Wars.’ While fans are picking sides, many of them see this new competition as a win-win situation. Asif Anzum ’21 said, “AEW has started off big, and I believe it will continue to attract fans as time passes.

Recently, WWE has made many changes after the introduction of AEW. WWE is viewing AEW as a potential rival, and the fans benefit the most. The fans get more quality content from both AEW and WWE now.” The new competition is undoubtedly giving fans more time to watch wrestling since WWE is presenting seven hours of content weekly on television, which can later be watched at any time through the WWE Network app.

The changes mentioned by Anzum are also visible, as McMahon appointed his two former rivals, Paul Heyman (who owned ECW) and Eric Bischoff (who was an executive of WCW). Other changes that the WWE made were the reintroduction of pyro and the lengthy contracts involved with wrestlers to avoid them from joining other companies like AEW.

Nehal Hossain ’21 comments on the new company’s effects on WWE by stating that “AEW is making WWE look worn out.” While AEW has always been advertised as something different from what WWE has presented, more and more people are beginning to agree with the idea that it would push McMahon’s company to improve.

They believe that it would motivate McMahon to try topping the newly introduced brand, the same way that he did with WCW in the late nineties. “AEW can either destroy the WWE by competing with better content or force them to change their content into what the fans like, so that they can maintain a strong following”, said Bronx Science wrestler Hemanth Chitharanjan ’21.

With WWE changing its content lately, its destruction seems unlikely, especially with its immense popularity around the world. However, with the positive reactions that AEW is receiving, WWE seems to be using NXT as a means to counter Khan’s promotion. With both AEW Dynamite and WWE NXT entering the ‘Wednesday Night Wars,’ fans are the only ones who can truly decide which side they are on.
“AEW can either destroy the WWE by competing with better content or force them to change their content into what the fans like, so that they can maintain a strong following”, said Bronx Science wrestler Hemanth Chitharanjan ’21.