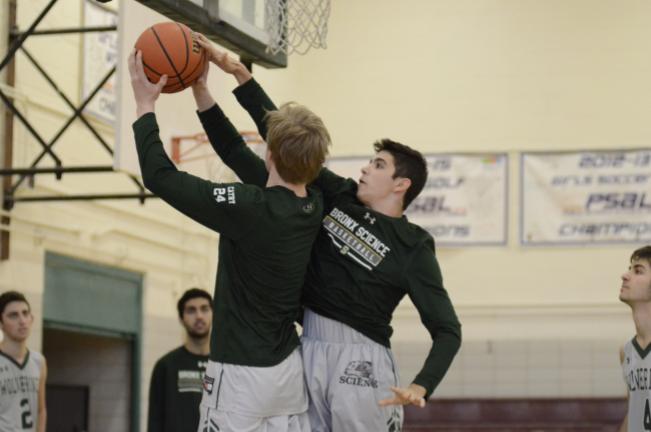 Drive and determination characterize high school prospects across the nation, including at Bronx Science.

Every year, the Barclays Center in Brooklyn hosts the NBA Draft. On this night, sixty of the world’s best college basketball talents are selected to the NBA team that they will start their career with. Each player in this arena is unique because they come with a special skill set and background that earned their spot in the arena. However, it was not always the case that all the new recruits began as college students.
“ You know, we didn’t let the game of basketball use us, we used it,” said Lebron James.
Up until 2005, high school athletes were allowed to enter the NBA Draft. Some of the greatest basketball players in history came out of high school such as Lebron James, Kobe Bryant and Tracy McGrady. Under current NBA rules however, a player must complete at least one season of college basketball in the NCAA in order to be eligible for the draft. Much speculation surrounds this topic, dividing college and professional basketball fans alike.

The NBA claims that a year of college experience is imperative for an athlete’s development. However, data shows that college does not significantly influence a player’s rankings. A year in college does not significantly change the rank of a top high school prospect. For example, in last year’s draft, many of the top college athletes’ ranks did not change drastically. Josh Jackson of Justin Siena High School was nationally ranked the second best player in high school, and was similarly ranked as the third best NCAA player as a Kansas Jayhawk. Another example of this is with Jayson Tatum, who was ranked  in high school and fourth in college.

With all the strenuous physical activity placed on developing players, there is a lot to risk as a first year in college. Top college athletes saw their draft stock (likelihood to be drafted) plummet due to career altering injuries. For instance, Harry Giles was the consensus number one pick in the early 2017 NBA Mock Drafts. But Giles, who enrolled at Duke University, suffered a knee injury early on that derailed his college playing season. Over the course of nine months, Giles went from being the likely top draft pick to the actual twentieth pick in last year’s draft.

The difference in draft pick is very noteworthy.  The number one pick gets $5.8 million for his first season contract versus $1.5 million for the player picked 20th. The NCAA and NBA would benefit significantly from the revenue that star players generate in a year, but the players do not make any money themselves.NBA teams benefit because they do not have to spend money on contracts for young players who have not. Colleges benefit from the large amounts of publicity that the promising young players bring. For example, the NCAA March Madness tournament racked up over 8.6 million views recently, becoming one of the most viewed sporting events. “Nobody in the NCAA puts in more work than the athletes, but nobody gets paid less,” said Jai Advani ‘20 regarding the lack of financial support for collegiate stars.

But it does not necessarily benefit players, who are practically forced to play in college without pay. As of 2016, the NCAA produced a revenue of 995.9 million dollars. This is a huge amount of profit, considering athletes do not receive a salary for all the hard work and dedication they put forth to make a name for the schools’ athletic programs. College is often forced upon athletes and they do not value their college education.

The NCAA has very lenient standards for their athletes. In order to maintain a position on the roster, athletes only need a 1.8 GPA, which requires minimal effort from the student. This is partly because the NCAA is focused on the sports revenue they get from the players and not the school’s academic reputation. A very good example of this is the case of Ben Simmons. In the 2016 NBA Draft, Simmons was the first pick, and started with the Philadelphia 76ers. In a documentary, “One and Done” Simmons talks about how he would rarely show up for classes as he felt that college was basically an obstacle in his path to the NBA. “I feel like the NCAA could do more to encourage athletes to prioritize education. A big reason why the athletes may not is because they see making the league as their best shot of helping out their family,” said Max Friedmann ‘20.  This is unfair to students who work very hard to pursue their goals at universities as scholarships are being given to athletes who will not use them for the right purposes.

Being drafted to the NBA can change a young athlete’s life forever. Lebron James, one of the greatest basketball players ever, grew up in a poverty stricken household with a single teenage mother. He used going to the NBA as a means of helping his family, saying “ You know, we didn’t let the game of basketball use us, we used it.'” Just as LeBron James was able to do, high school athletes should be given the choice to enter the NBA again if they are up for the challenge.