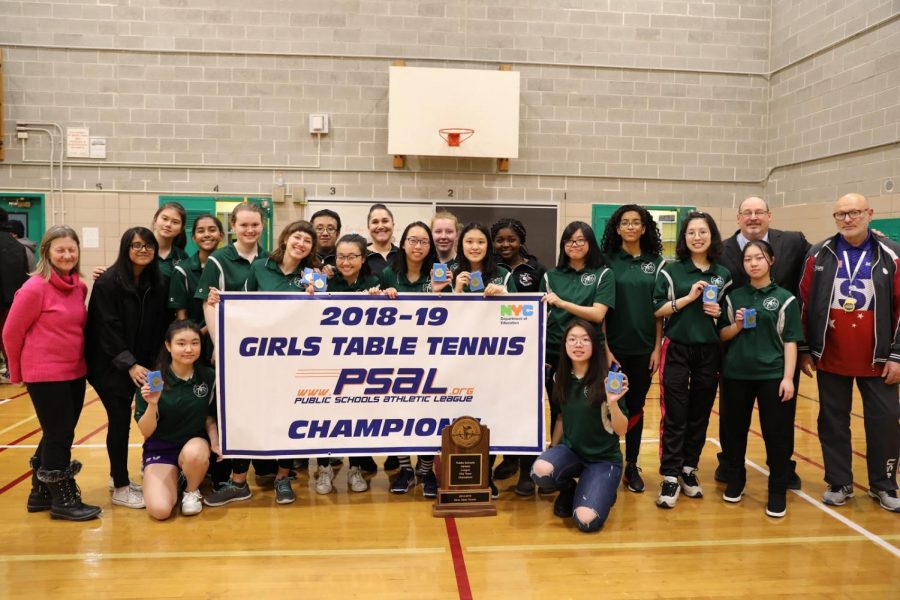 The Girls’ Table Tennis team had to overcome many challenges as they recruited several new members on the team this year including Gina Seo ’22 , Chloe Guerrero ’22, Kristina Lian ’22 and Emery John ’20. Seo had an especially important role on the team as a ninth grader playing first singles. This put extreme pressure on her since it was a very important spot on the team. “The commitment that I had to make for this team was very impactful, and I am happy that we as a team were able to overcome this challenge together as we supported each other no matter what, just like a family would,” said Seo.

Overcoming stress before matches was definitely a challenge for many of the members. The matches happening around them, their surroundings, and the all people watching the game made it difficult for the players to focus on their match. Instead of focusing on scoring, everyone focused more on learning from their mistakes and doing better the next time they face the same challenge. “I fine-tuned my focus and tried to cast everything but the ball, my partner, and my opponents out of my mind; I imagined a bubble around all of us,” said Yan Fen (Yanny) Liang.

Everyone on the team was extremely dedicated, and many stayed even later after practice to improve their skills, which ultimately paid off with the title of champions. “It was the little baby steps that helped me continue and eventually win,” said Liang ’19.
Instead of focusing on scoring, everyone focused more on learning from their mistakes and doing better the next time they face the same challenge.
Encouragement and advice from the teammates and Coach Sisilli were very important for the overall success of the team. “They always made me laugh when I start getting nervous and always founds ways to help me improve, ” said Jasmine Lo ’21.

This year, the team was especially close with each other. They learned very quickly that they were a team, and that they must work for both themselves and the team. They helped each other along the way, just like a family. “All our incredible seniors who are graduating will be missed, yet we will not lose our team spirit! Our goal is to take over the city championships once again!” said Seo ’22.