The Winter Athletes of Bronx Science 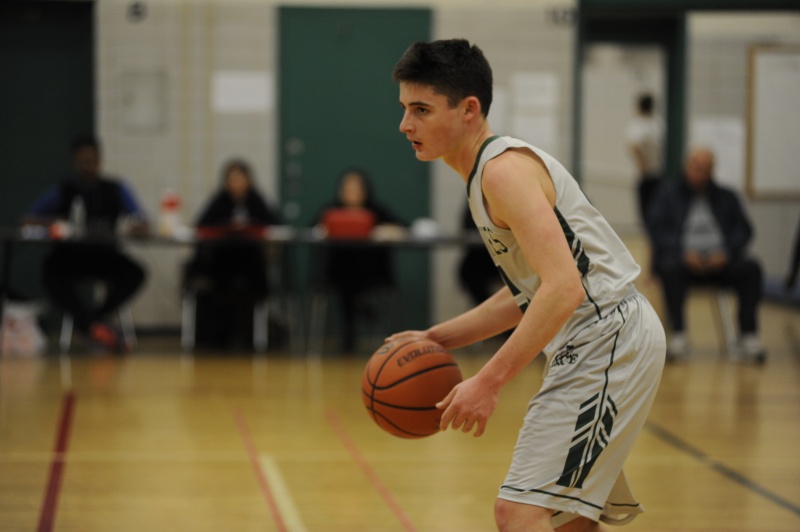 Tate McLean '19 watches carefully for a chance to go in.

As winter approaches, the winter breeze grows colder and colder. While many students choose to stay in and avoid the dropping temperatures, aspiring Bronx Science athletes strive to polish their skills and physique in order to prepare for the upcoming winter sports tryouts. Bronx Science has six different winter sports teams, each offering a unique opportunity for students to practice and expand their athletic prowess. These sports include wrestling, table tennis, swimming, indoor track, gymnastics, and basketball. Of course, each team consists of individual members who share different stories with their sports.

“Due to the wrestling team being co-ed, the team is bigger than most of the other teams here at Bronx Science,” captain Lyn Kajihara ’19 said. “I think that’s what makes it so special because we’re all made up of people, with different strengths and mindsets, working towards a common goal.”

Last year, they’ve won their third consecutive championship. Now, this year, under the guidance of Coach Chris Smith, they strive to go above and beyond and earn the title of “the best of the best.”

From the wrestlers of the east gym, we transition to the west gym. The audience was in complete silence. Only the sound of the ball bouncing remains throughout the the entire court. The relentless Wolverine dribbles the ball across the gym, until finally, she shoots a three pointer.

“Ever since the first tryout, I am now a lot more confident, and the captain of the team. Compared to my shy freshman self, I’ve become closer to my team, and thus more social,” captain of the Girls’ Varsity Basketball team Christina Satina ’19 said. “Although basketball is stereotyped as more of a masculine sport, girls shouldn’t be discouraged by it and should try out. It’s one of the longest seasons, but it’s definitely worth it in the end.”

With the Girls’ Team entering the elite eight last year and the Boys’ Team achieving their goal of divisional crown, this year’s teams are on a path towards success.

Similarly, the Girls’ Gymnastic team also achieved a great accomplishment, capping off the season at fifth-best in the city last year.

“The amount of time you need to spend to maintain your flexibility, strength, and skills is one of the hardest things. Not only do gymnasts need to be really fit, but the nature of the sport requires a lot of repetition and time spent training in the gym,” captain Elinor Poole-Dayan ’19 said. “When I tried out freshman year, I was really nervous because I didn’t have much background in competitive gymnastics. However, ever since then, I’ve learned to have fun with it and therefore improved a lot.”

As the Winter Season begins, the Wolverines on the team continue to polish their movements in order to produce beautiful choreographies.

Moving to the pools of DeWitt Clinton, the members of the Bronx Science Swim Team takes the competition into the waters. Ending off the season with a 7-1 record, they won second place in the Bronx-Manhattan League and third overall in the PSAL playoffs.

Their accomplishments prove to us that their team dynamic is unbreakable. “We had one senior in our relay, Peter Lam, and I wanted to bring him to States more than anything. During my last 50, my only thoughts are to win this for Peter,” Christian Moy ’19 said.

“I remember looking at Stuyvesant and Brooklyn Tech in the lanes next to us. They were pretty close, and the one thought that came to my mind was, ‘You can do this; they’re nothing compared to you,’” Moy said. “When I finished, all I heard were the screams from the rest of my relay, and before I looked up at the board, I knew that we had won.”

Scattering throughout the cafeteria of Bronx Science, the members of the Table Tennis team swing their paddles swiftly to ensure victory. In the past few years, both the Boys’ and the Girls’ team maintained their steady records on the divisional level, with the Boys’ team finishing off at third place in the finals and the Girls’ team reaching the semi-finals.

“At tryouts, it’s important to not stress too much about the outcome. Just do your best and your abilities will naturally shine through; if anything, tryouts are a great opportunity to just have fun,” Yan Fen (Yanny) ’19, captain of the Girls’ Table Tennis Team, said.

The cold atmosphere isn’t even enough to stop these swift Wolverines from continuing their running agendas. Last year, both the Boys’ and Girls’ team achieved outstanding feats, bringing home borough gold. This year, they continue running practices, in hopes to bring home city gold this time.

“There are two ways to qualify for cities for an event: hit the time, or win the event at Borough Championships. But since we never hit the qualifying time, we were expecting to do poorly at cities and just decided to have fun with it,” William (Ben) Wade ’19 said. “We ended up all running our best times and placing fourth in the city, blowing everyone’s expectations away. It was one of the best moments of the season.”

“My advice is to make sure you’re dedicated to the sport. Track is extremely difficult, but it gets significantly easier if you actually enjoy it,” Wade said. “You don’t even have to be good at running.”

Whether you grew up with it, or want to get more involved, we all have a sport that defines who we are as a person. To bond with a team, and to maintain a healthy physique, the Bronx Science winter sports teams are a good way to stay engaged during the snowy season. As the season has just begun, visit the Bronx Science Athletics PSAL page for the schedules, and come out and cheer on our Wolverines this season.