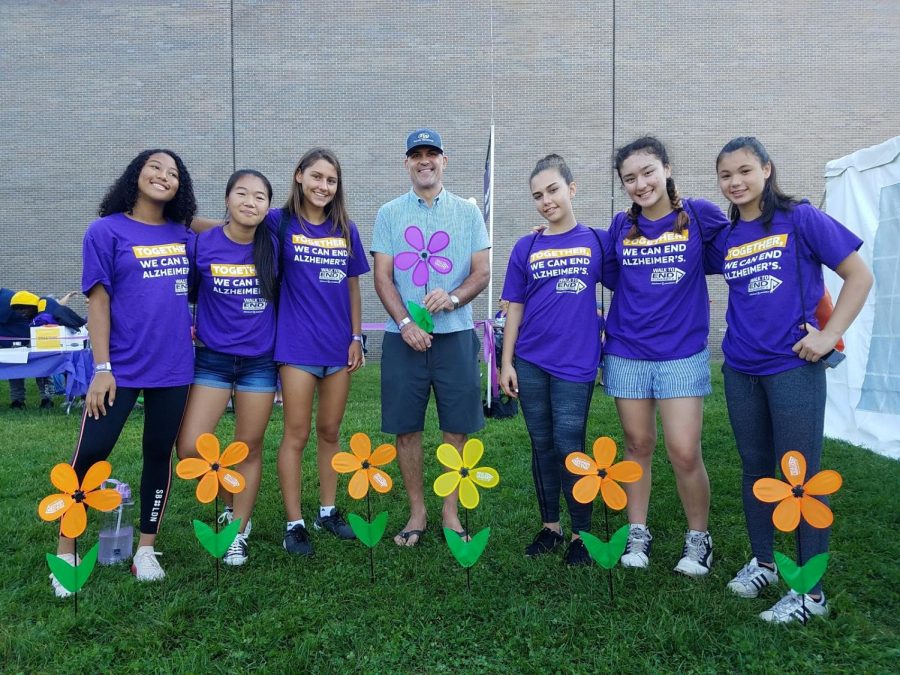 The attending players with their Coach, Mr. Skilins.

On Sunday, September 16, 2018, six girls from the Girls’ Varsity Volleyball team met at Purchase College in Westchester with Coach Skilins to participate in the ‘Walk to End Alzheimer’s,’ one of many that occur annually across the country. The girls and their coach went under the name “Larry’s Team.” The team was put together by Donna Prezant, the wife of Lloyd Prezant, a Bronx Science alumnus who graduated in 1970, and a volunteer working along with the Alzheimer’s Association.
“We turned our grief into action.”
Mrs. Prezant created Larry’s Team in 2013 in honor of her father, Lawrence “Larry” Ferdinand, who passed away at age eighty-seven in December of 2012. “Seeing Dad suffer from Alzheimer’s changed my family’s and my life forever,” Prezant recalls. “We turned our grief into action.”

While attending the Bronx Science Alumni Day with her husband last June 2018, Prezant met Mr. Skilins and discussed her volunteer work for the Alzheimer’s Association, inviting him to the ‘Walk to End Alzheimer’s’ in September.

Having lost his grandmother to dementia and Alzheimer’s disease, Mr. Skilins was willing to be a part of the cause. Not only did he want to participate out of a sense of duty, but it was also an emotional investment. “My grandmother was one of those grandmothers who held the whole family together,” Skilins said. “I saw her about two weeks before she passed. She really didn’t recognize me but she held my hand the whole time I was there.” As he continued to contact Mrs. Prezant, he was eager to bring his volleyball team together for the charity. “Everybody just felt like this was something we had to do,” Skilins said, grateful for the support that came from the team’s parents and players. “I didn’t anticipate that there would be that much enthusiasm.”

The girls on the team appreciated having the chance to participate in the Walk. The attending players were all sympathetic toward the cause. “My family has a close friend who is almost like family to us and her father has Alzheimer’s,” said Melanie Chuu ’22. “It’s tough to see him with Alzheimer’s and see the effect it has had on his family and life.”

Even those who have not been affected by Alzheimer’s came to support Coach Skilins and the fight to end the disease. Yilin Manfredi ’22 said,

“Alzheimer’s is a disease that can be very hard on families, especially Coach [Skilins].” She said that for the team to attend the walk, they were giving “a wonderful contribution to the greater cause.”

Many volleyball team members felt grateful for the chance to support a good cause and also be more than just a sports team. “Volleyball is so much fun, but it’s also good to have some time off to just chat and get to know your teammates more off the court,” commented Chuu. “It helped bring our team together because we were doing someone meaningful,” Manfredi added.

Skilins felt that attending the walk was necessary for the team. “I think this should be mandatory for sports teams, especially at Bronx Science. We have a lot of enthusiasm, and we have a lot of teams. It’s a great opportunity to get out in the community,” Skilins said. Reflecting on the ‘Walk to End Alzheimer’s,’ Skilins noted, “I’d do it again in a heartbeat, and I think the team would too.”