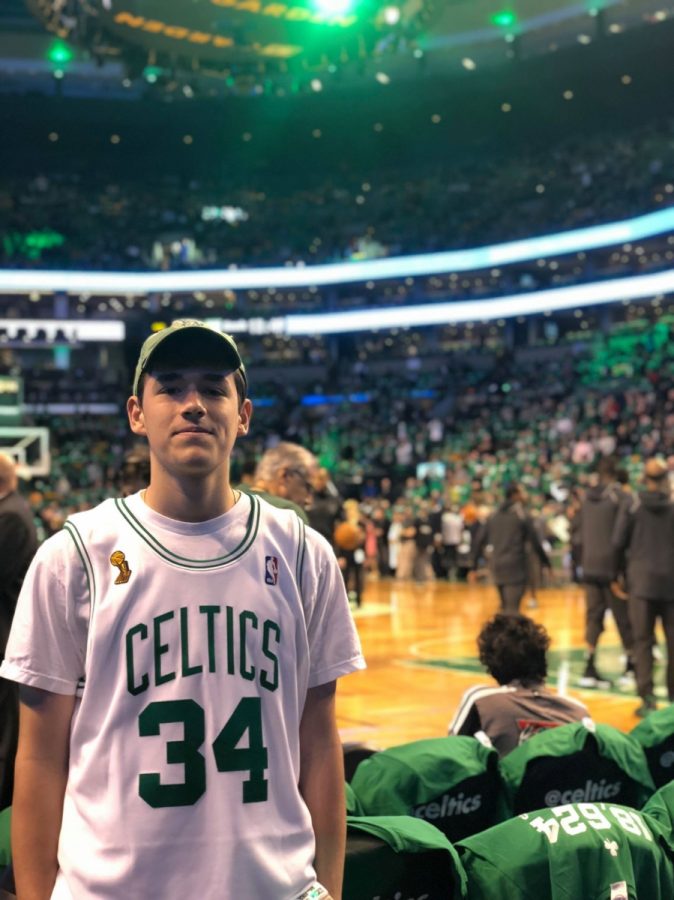 For avid Celtics fans like Lucio Vainesman ’18, the NBA playoffs are at a completely new level compared to the regular season. Vainesman is shown posing at Game 1 of the Celtics vs. Bucks matchup of the 2018 NBA playoffs.

Thirteen NBA teams fight for one championship trophy. As the Seventy-first NBA season came to a close on April 11th, 2018, it was time for the sixteen qualifying teams from both the Eastern and Western Conferences to prepare for the NBA Playoffs, which would begin on April 14th. NBA fans around the globe have been making predictions based on the ups and downs of the 2018 NBA season, and such predictions have boiled down to the sixteen qualifying teams in Round 1 of the 2018 NBA playoffs.

Of these teams, there are some that have not been in the playoff talks for a long time, namely the Minnesota Timberwolves, Utah Jazz, and Philadelphia 76ers. What came as a surprise was when the Timberwolves got hold of the final eighth spot to qualify in playing in the post-season by winning one more game than the Denver Nuggets, short of a playoff run by one win in the regular season. On the flipside, the other thirteen teams placing for this year’s NBA playoff tournament were expected by fans.

When Bronx Science students were asked about their perspectives on the post-season and what was yet to come, tensions arose as students took strong stances on the playoffs, in relation to who should be awarded the most valuable player (MVP award).’

Abir Hossain ’21 sparked the debate. He said, “Lebron James should win the MVP award over James Harden, who most people probably want to win it because he didn’t receive it over the last two years.”

Moreover, Hossain added that “the Rockets do not need Harden to succeed, while the same can’t be said if James leaves the Cavaliers.”

In response, Youngbin Song ’21 relayed back to round one of the NBA playoffs, honing in on the Rockets-Timberwolves series, emphasizing how “James Harden has been thriving off of nonsensical foul calls and traveling violations.” Song defends Hossain’s claim against Harden receiving the MVP trophy, but for different reasons.

Other students such as Henry Guan ’18 and Mohammad Ahshan ’19 took it a step further, affirming that the Rockets have a high chance of becoming the 2018 NBA champions. Only time will tell whether their shared belief in the Rockets will be enough to bring the trophy from Golden State to Houston.

The hopes for Houston representing the Western Conference in the 2018 NBA Finals are shared by Liiban Aga ’19 and Alpha Barrie ’20, although Aga believes the Cavaliers will make the finals and perform just as they did in 2007, beating the Rockets in a best of seven series. Barrie, on the other hand, believes that the Raptors will make the finals and play against the Rockets. Immediately, Aga refuted Barrie’s prediction, stating that the Raptors do not perform at the high level that is typical of them during the regular season.

As Round 1 of the NBA playoffs unfolds, the Eastern Conference brackets consist of the Toronto Raptors vs. Washington Wizards, Cleveland Cavaliers vs. Indiana Pacers, Philadelphia 76ers vs. Miami Heat, and the Boston Celtics vs. the Milwaukee Bucks.

On the other side, the Western Conference brackets consist of the Houston Rockets vs. Minnesota Timberwolves, the Oklahoma City Thunder vs. Utah Jazz, New Orleans Pelicans vs. Portland Trail Blazers, and Golden State Warriors vs. San Antonio Spurs.
“Playoff basketball is on a whole different level. The whole town of Boston was rallying behind their team, where players like Terry Rozier played at a level that had everybody chanting. You could feel the excitement the moment you walked into the arena,” said Lucio Vainesman ’18.
After the NBA playoffs began on April 14th, 2018, there have been major upsets for teams such as the San Antonio Spurs. The Spurs have not missed a beat, making the playoffs in twenty-seven of the last twenty-eight NBA seasons. Yet, this year, the team started off the playoffs against the reigning champions from the 2016-17 season, the Warriors. This would pose a problem for the Spurs, as the Warriors have kept their consistency in game play, winning a strong four games to one against them and advancing to the second round.

For the Trail Blazers, they have played a strong season thus far, but the playoffs have been an atrocious experience for them, losing four games to none against the Pelicans, a team that placed three spots below the Blazers and played much of the season without key Center player, DeMarcus Cousins.

Other surprises during the first round include the underestimated Jazz team posing a strong matchup against the Thunder, to the extent that a fierce rivalry has developed between both teams. Such a rivalry resulted in the underdog Jazz team coming out on top of the Thunder in a matter of six games.

Lastly, the Timberwolves have just barely made the playoffs, winning their last season game against the Denver Nuggets, also fighting for the last playoff spot in the West. Unfortunately, the Timberwolves have not been in the playoffs since 2004, so the playoff matchup against the Houston Rockets did not fare well for them, as they lost in five games. The Rockets would come out strong in the second round, beating the Utah Jazz in a matter of five games, facing up against the Warriors, a matchup basketball enthusiasts are eager to see the outcome of.

In the Eastern Conference, it was a tight matchup between the Indiana Pacers and Cleveland Cavaliers. The same could be said for the matchup between the Boston Celtics and the Milwaukee Bucks, and in such matchups that went to a best of seven series, the atmosphere completely changed from what was brought in the regular season.

One Bronx Science student in particular, Lucio Vainesman ’18, found game 1 of the Celtics round 1 matchup especially exhilarating, as he was able to sit at the courtside for the first time in his favorite basketball arena, the Celtics’ TD Garden.

“Playoff basketball is on a whole different level. The whole town of Boston was rallying behind this team, where players like Terry Rozier played at a level that had everybody chanting. You could feel the excitement the moment you walked into the arena,” said Vainesman.

It is only a matter of time before the NBA finals are upon us in June, and as fans all around the globe make sure their brackets are as accurate as possible, others huddle around their TVs, cheering on their teams of choice.