A Recap of the Boys’ Varsity Basketball team season. 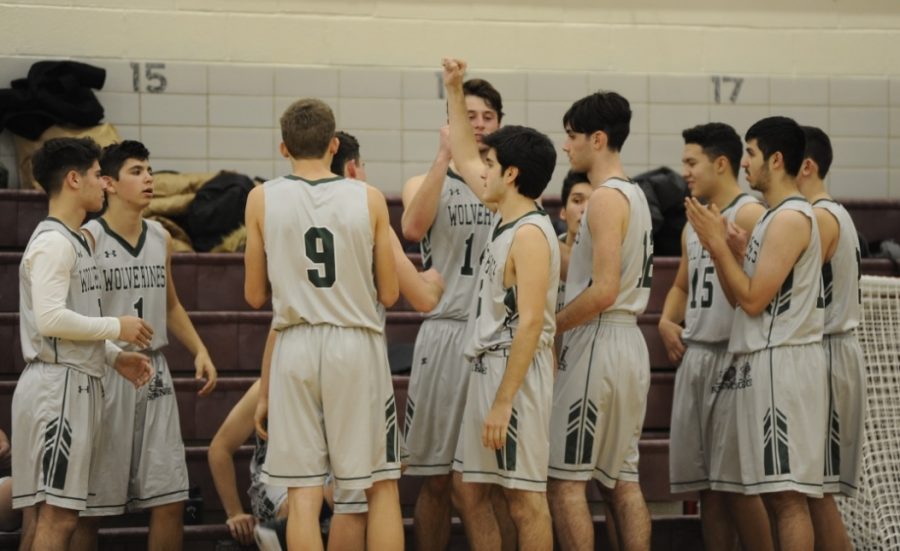 Boys' Varsity Basketball eam members gather around to encourage each other before a home game.

Every sports team has their fair share of ups and downs, the Boys’ Varsity Basketball team being no exception. In the aftermath of last year’s unfavorable season, they did not expect to be as successful as they were. However, the team experienced an unexpected resurgence which left them with high hopes for next winter.

Part of the teams’ strength during the season lay in the attitude that they exhibited. Confidence played a significant factor in their performance, helping them score steady wins game after game. When faced with tough opponents and personal adversity, an advantage they had was the ability to believe them in themselves and their potential. “When we started the season with seven straight wins, we began to relax and took our foot off the pedal,” said Kieran Heffernan ’18.
“Coming together as a team, remembering fundamentals, and trusting each other again allowed us to overcome those obstacles.”
Not only did the victories they had attained further boost their morale, it also gave them the motivation to do better in the next game. Compared to previous years, one great difference was that there was an improvement in the way gameplay strategies were formulated. The captains were organized and authoritative, and the team was consistent in their activity.  By combining the new skills that they learned with growing experience, the hours they put into practice paid off. “Our pre-season practices were super intense this year, and we all came in with the mentality that we were going to be successful,” said Theodore Lowen ’18.

Perhaps the most important thing, however, was the bond between the team. This year, they were more closely knit than before, which helped them strengthen their bond and overall sense of brotherhood. The team members continually had faith in one other, regardless of whatever obstacles had appeared in their way. “Our team chemistry and overall morale was great because we supported each other and all wanted to achieve our goal of making the playoffs,” said Adam Israelevitz, ’19.

Of course, success did not come easy, and there were challenges they had to face. One such shortcoming was the overall team size, which was less than that of what they were used to having. However, a smaller team called for better execution, which was why it could also have been considered an advantage.

Furthermore, due to the fact that the basketball season was one of the longest for any sport, no team member had the luxury to slack off. From the first day of practice to the very last game, they had to maintain their focus and remain vigilant in achieving their goal. Even after being faced with difficult adversaries mid-season, they remained steady in their convictions and continued to stay strong.

“Coming together as a team, remembering fundamentals, and trusting each other again allowed us to overcome those obstacles.” said Heffernan.