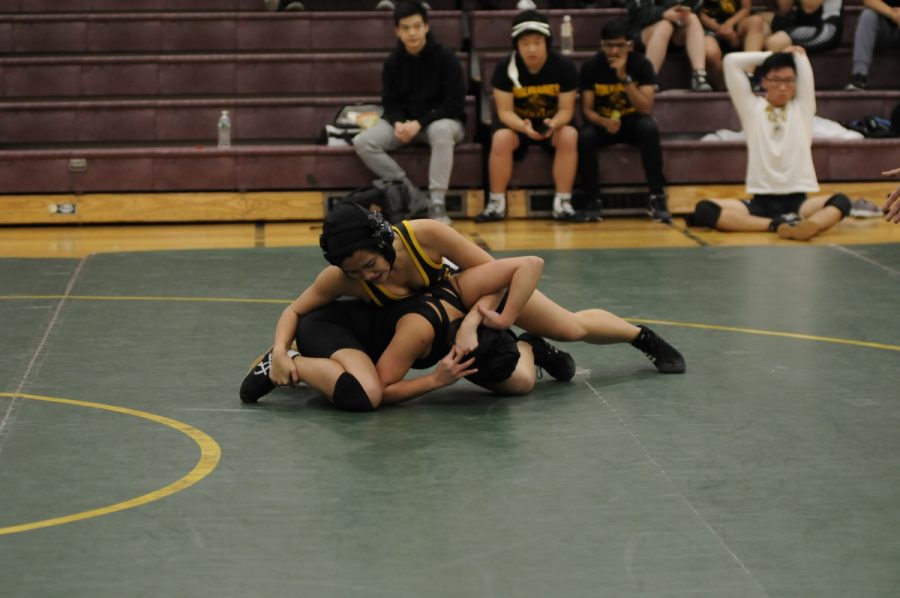 Amanda Chen '18 attempts to run a break down to win against her opponent.

Bronx Science Wolverines once again took home the gold in the PSAL City Championships for Varsity Wrestling for the third year in a row. As one of the largest sports teams in the school, the team still manages to bring back winning titles. Captains Lyn Kajihara ’19, Samee Buccellato ’19, and Steven Shinas ’18 all provide input into how they have helped brought their team to success.

During a typical meet, everyone is full of nerves as they all jog around the mats to warm themselves up. As the Wolverine wrestlers begin their match, their teammates are all circled around the mat, ready to yell out words of inspiration or helpful coaching tips. Although the wrestling team is very large, the captains have still been able to divide themselves across their teammates to offer instruction to new members of the team. Buccellato ’19, is especially dedicated to helping the new members of the team. On all the years he has been on wrestling, the Wolverines have placed first in the city and he plans on achieving this again for his senior year by working personally with underclassmen.

As wrestlers face their opponent before the meet begins, both competitors are filled with anxiety. Many wrestlers in the team admit to feeling very tense, since they can not predict what move their opponent is going to perform. However, the wrestlers learn to deal and perform well under pressure.

Wrestlers on the team have admitted to feeling a brief sense of failure after an unsuccessful match, but they always bounce back and accept their coaches and teammates advice to improve. The team has learned to focus on the highlights of their match and what they can do to improve rather than to dwell on the negative aspects.
However, the wrestlers learn to deal and perform well under pressure.
Best of luck to the season next year, as the team will hopefully win first again for the fourth year in a row.